Her voice breaking, tears welling up and words rushing, Esther Ra ’19 reads a selection from her first collection of poems, “book of untranslatable things” (Grayson Books, 2018), to a rapt audience: 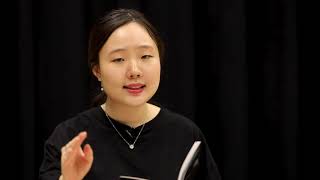 Watch Ra read two of the poems from her new book.

even behind the tiki torches:
a loneliness so wet and empty
only the glower of rage
can reduce it

“Reading my work is always a deeply vulnerable and scary experience for me,” Ra said. “It always humbles me that there are people who generously give their time and space to hear my words, and I want to repay them by truly speaking from the heart. Thus, I often choose poems that are deeply personal to me during my performances, whether it is about my country, my life or my family.”

Ra was born in Seoul, South Korea, lived in California from age 1 to 7, then returned to South Korea for high school before coming back stateside for college. In addition to Whitman, she has studied English literature at the University of Oxford. 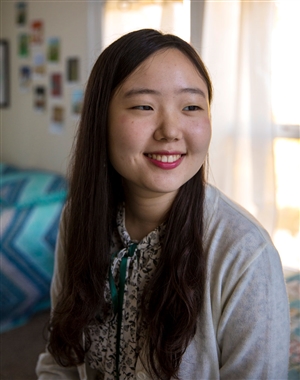 Ra said she cannot remember a time when she hasn’t wanted to write.

“My mother says that when I was 3 years old, I declared that I wanted to be a writer,” she said. “Although I have no memory of this, I’ve definitely been writing as long as I can remember — exuberant, horribly plotted fantasy novels, plays for my younger sisters and sentimental journals that sprawled on for two years.”

She began writing poetry in high school, where she discovered female poets like Sarah Kay, Sylvia Plath and Anna Kamienska. 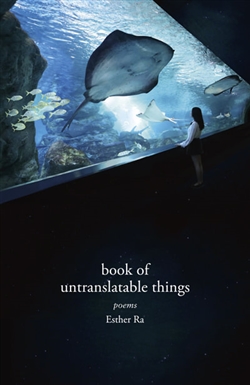 “Once I grew intimate with poetry, its mystery, its love lines and capacity for saying the most painful truths with slant honesty, I’ve never been able to wade out of its waters,” Ra said.

Her experience at Whitman, including membership in Poems Club, further informed and inspired her passion for writing verse.

“Writing poetry in English in Korea can be a lonely experience, so it was so exciting to be in a community of people who loved writing,” she said. “We wrote, performed and practiced together every week, and became a slam poetry family — ‘slamily,’ as we used to call it.”

In 2016, Ra was one of the representatives for Whitman at CUPSI, a college union slam poetry competition, and one of their group pieces was selected for the final stage.

“Poetry doesn’t feel like a career to me, so much as an attentive attitude toward life,” she said. “Korea and my family always tug at my heartstrings, but I also know that I will continue to run after my love for the English language in some form or another. I am grateful that Whitman could be my first step.”