On the basketball court Tommy Lloyd ’98 was a prolific scorer. He set the Walla Walla Community College single-game scoring record with 52 points and was the leading scorer in the NWAACC All-Star game with 22 points his sophomore season. He finished his collegiate basketball career playing for Whitman during his senior year, graduating with a degree in biology and a secondary teaching credential.

Lloyd has scored even more points on and off the court as an assistant coach with the nationally ranked Gonzaga Bulldogs men’s basketball team. Now in his 20th season, Lloyd has shown an uncanny ability for recruiting international players and an affinity for building teams united by their diversity.

You transferred to Whitman during your senior year, following two years at Walla Walla Community College and one at Colorado State University at Pueblo. How did your college experiences prepare you for your professional career?

It was great having a lot of different college experiences: going to a community college, then a state university, and finishing up at Whitman. It was a pretty well-rounded academic experience. Whitman was great, and it was challenging. I had thoughts of being a doctor someday, but when I got to Whitman and found out how hard it really was, how smart the competition was, that’s when I decided that my fellow classmates could go on and find cures for cancer and I could go coach basketball. I give Whitman credit for really teaching me how to think, how to solve problems and come up with creative solutions. The scientific process way of thinking I learned at Whitman is something that continues to benefit me to this day.

After college you played for international basketball teams in Australia and Germany, and have since specialized in recruiting international players from around the world — Japan, Poland, France, Brazil and Nigeria. Gonzaga men’s basketball head coach Mark Few has said you have “an uncanny knowledge of the international talent and the international game.” How does a guy born and raised in Kelso, Washington, become an expert judge of character of people from vastly different cultures?

My interest in international basketball was borne out of my family. We hosted exchange students every year when I was growing up, so I was exposed to people representing vastly different cultures, which I found interesting. My brother was an exchange student, but I was never able to be one because I was always playing varsity basketball.

My wife and I traveled a lot when we were younger, and one thing led to another and it’s something we continue to enjoy to this day. For me, traveling isn’t a bad part of my job; it’s a benefit, a plus. I love the travel that comes with being a coach and meeting these different people. So, those two things meshed perfectly: my interest in international culture in general, not just basketball, and Spokane has been a welcoming community. The following and fan support is something the international players really enjoy.

Once you assemble a team of players from disparate places, how do you get them to mesh?

I think when you incorporate all these different cultures, at the end of the day people are people. You put them in a locker room and that diversity enriches it. People come from different backgrounds and have different experiences, and I think our players are genuinely sharing them with each other. It’s a fun dynamic, to be sure.

You’ve been an assistant coach for 18 years and been tagged as a coach-in-waiting. Tell us a little about the time and effort you invested to get the job — including volunteering for two years — and the factors that have made Gonzaga a fit for you over the long run.

When I first came to Gonzaga I asked for nothing more than an opportunity, and I received nothing more than an opportunity. It was a purely volunteer role. The timing was right because the program had just burst onto the national scene and it was still pretty resource poor. It needed someone who could come in and help with odds and ends. That’s how I got a foot in the door and developed a great relationship with the other coaches, and Coach Few being the boss. An opportunity came up to hire me two years later and we did it, and I hit the ground running.

What advice would you give recent alumni and current students who hope to build a successful career such as yours?

Consistency, loyalty, patience — those are the huge keys in my profession, and I’m sure it’s the same for others. There’s a tendency for people when they are starting up to be more focused on climbing the ladder rather than developing their craft. I think they risk losing sight of doing great work at their current job, constantly searching for someplace else that looks better. That’s something I decided never to partake in. I’ve always felt that the job I had is the most important and deserves 100 percent of my focus. If other opportunities come out of that, they will be presented but I don’t necessarily need to pursue them.

That being said, I knew right away that I was with good people and an up-and-coming situation, so that’s also important. You always want to associate and affiliate yourself with people who have strong ideals and are high achievers. When you can get that synergy of being in a healthy growth environment and you sprinkle on your loyalty and service to the program, that’s a winning formula. At the end of the day, it shows really quick when you get in a new work environment who’s loyal — who’s here to serve the program versus themselves. If you don’t bring a genuine approach to the job, I think your co-workers will sniff it out really quick.

Over the years you’ve won numerous conference titles, NCAA berths and mentored All-American players, some of whom have gone on to play professional basketball. What makes a winner?

First and foremost, obviously, is work ethic and toughness. But there’s a big mental part too, staying focused and continuing to improve, having the foresight to think like that. People want to make a tangible aspect of winning when it’s a pretty abstract thing. In my mindset, I don’t think like we’ve won championships; I think about what are we doing now to get what we want to achieve in the future. It’s being present but not stuck in neutral — present with a mindset of, “What am I doing now that will help me be prepared for what I want to achieve in the future?”

How do you handle losing, especially an upset, such as last year’s loss against the lower-ranked Florida State Seminoles in the NCAA Tournament Sweet 16 round?

Hey, losing is part and parcel of the process. I mean, obviously, I don’t like to lose but when it happens I embrace it. It’s a real opportunity to be honest with yourself, assess what went wrong and what you do differently the next time. When we lose it automatically kicks in a mindset and process of what happened and how we can fix it. In coaching, and I’m sure a lot of other jobs, you have to like solving problems. You get exposed. There’s a part of me that actually enjoys it because it is part of the process. Nothing is going to be without bumps in the road, and those who are the best at predicting where those bumps occur and how to proceed when you get past them, they are the people who will ultimately be most successful.

Do you keep tabs on Whitman’s basketball teams?

The last couple years I’ve been able to watch the teams play against Whitworth. I think Eric Bridgeland (Whitman men’s basketball head coach) and Michelle Ferenz (women's head coach) are doing amazing jobs — they’re taking Whitman to places a lot of people probably thought it would never get to. They’re doing it consistently and it’s been fun to watch. I’m really proud of them, the work they’ve done and continue to do. They have a clear vision and ability to execute it. It’s been impressive.

What’s great about Walla Walla and Whitman is they are places with a humble foundation but they produce amazingly high achievers. Students and faculty should realize they’re sitting in the same seats as those before them who have achieved amazing things. I think it’s one of those places where dreams can really come true. It’s a great place to think big and do amazing things. 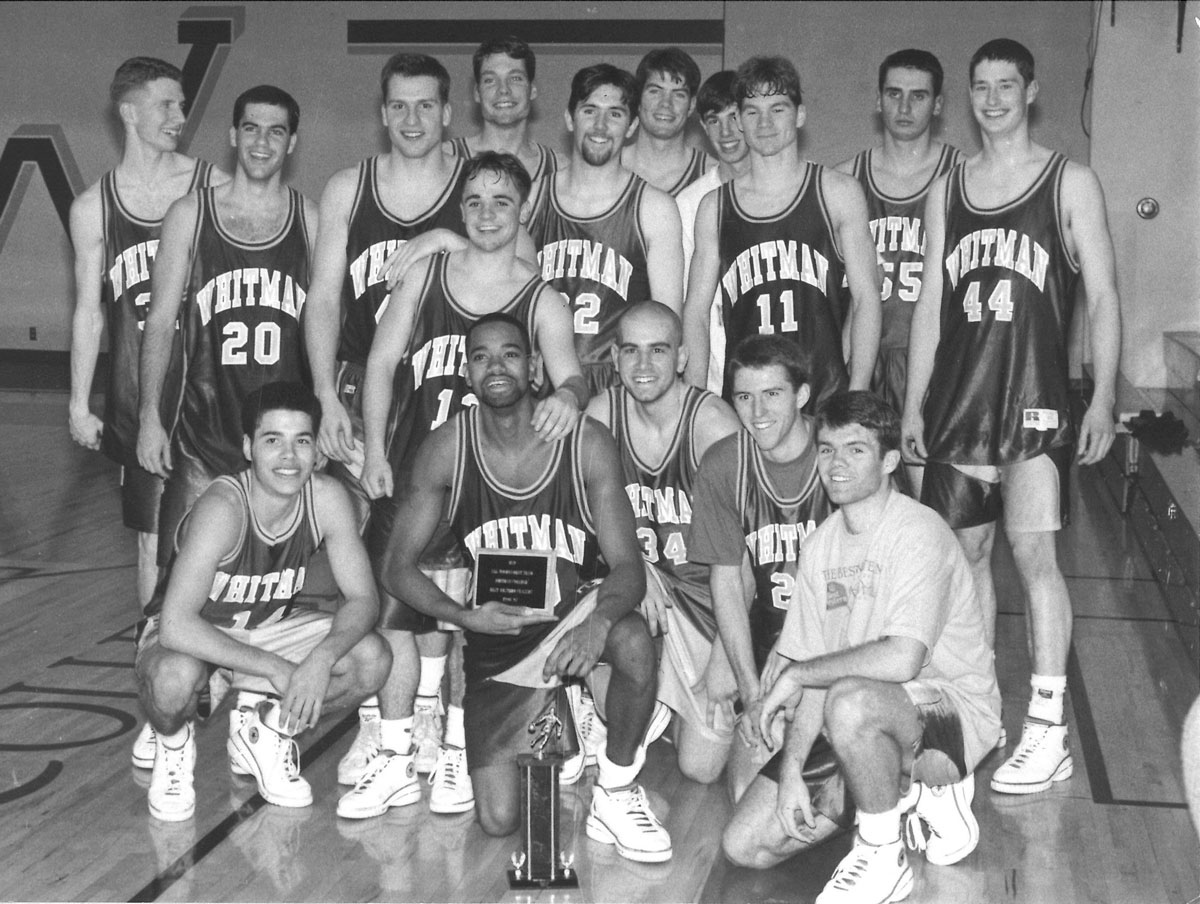