The Notes Between the Cracks

"It's an additive synthesis. I was always hearing new people, new directions, new ideas-trying to synthesize that and learn from what they were doing," said Scarborough, chair of Whitman College's Music Department and director of jazz studies. He joined the Whitman faculty in 2011.

The most recent example of this musical synthesis is Bridges (2015), Scarborough's third album. The record features internationally acclaimed musicians from the United States, Morocco and Palestine and marks the first collaboration between an American jazz trombonist and Middle Eastern classical musicians. Samuel Jones, composer in residence at the Seattle Symphony from 1997 to 2011 and Scarborough's uncle, called the CD "immediately likable and superbly crafted" and an "exceptional album that blends Doug's deep knowledge of American jazz with sounds learned from his travels in the Middle East."

In the classroom, too, Scarborough brings a collaborative approach, guiding his students as they explore theory, performance and composition.

Long before the trombone came voice-his first musical tool. On family road trips, "My parents would sing the melody and my sister and I learned how to sing harmony," he said. His sister learned first, which "caused me as a younger sibling to play catch up." By seventh grade, he was playing trombone and deciphering chord sequences to his favorite pop songs on his father's piano.

Though Scarborough has become an accomplished bassist, pianist, singer and composer (in addition to his primary work as a trombonist), he would not necessarily say he was a natural musician. "[But] I can tell you this: It's a lot of work, and it dries up if not tended to, like a garden."

Being an educator, however, did come naturally. When his parents couldn't find a babysitter, the young musician would sit in the back of the classroom watching his father-physics professor and sometime classical pianist-as he taught.

"Just hearing the way he would explain things made me a teacher. Because you hear your dad do it, you kind of follow suit."

Scarborough earned his D.A. in music theory and composition from the University of Northern Colorado, with a focus on jazz pedagogy. The genre's expressive breadth is part of what makes it unique, he said.

"It's the notes themselves, it's the melodies, it's the direction you want to keep it going," Scarborough explained. "What you're doing is playing with the expectations of your listeners. It's all about setting up the expectations. You're fulfilling it, you're fulfilling it-and then you deny it in a way that's artistically moving and that might produce a certain aesthetic effect in your listener. How to do that is the art of it."

Bridges exemplifies these dual notions of musical synthesis and confounding expectations. The CD's nine tracks fuse jazz with Middle Eastern rhythms, modes and scales known as maqamat (or maqam, in the singular). These scales use quarter tones-notes that would "fall between the cracks" on keyboard or valved instruments.

Imagine a piano keyboard. A C sits immediately to the left of a C sharp, which is a half tone higher in pitch than the C. A quarter tone falls between the C and C sharp, making it unplayable on the piano. However, on a slide instrument like the trombone, that quarter tone (which would be called a C half-sharp) can be played by moving the slide in or out. On a string instrument like a guitar, bending a string to raise its pitch can also produce a quarter tone-the way jazz and blues guitarists create "blue notes."

"The sounds just hit my ear in a way that nothing ever had," he explained. "There are notes that, when you first hear them as a Westerner, they just sound wrong because they're not one of our 12 pitches. Yet they keep going back to those notes and everybody is saying: That's awesome! And you feel like you're the oddball in the room who doesn't get the joke."

Like any regional cuisine, he analogized, "You have to try the food a few times before you're able to say: Okay, those are the spices, now I get it, now I see what they're going for." 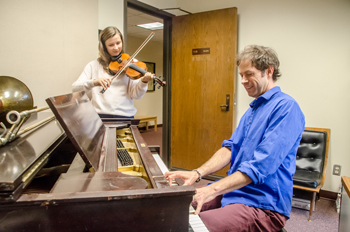 Scarborough recognized the affinity between Middle Eastern music's quarter tones and jazz's blue notes, but the differences intrigued him more. Each maqam scale, for example, possessed a specific and strong association with a certain mood. Although there are parallels in Western music-major scales are joyful and minor scales are morose-it is more nuanced with maqamat: one intended as triumphant and regal, for example, another as melancholy or reflective.

"When a player switches into that other maqam, you can see that everybody in the room instantly gets it. It's this other code-they speak in that code, they hear in that code and they get the association with triumph or contemplativeness or sadness."

Recording Bridges in Portland, Oregon, a few months after the sabbatical was "all about collaboration," Scarborough said. Acting as guide for his American and Middle Eastern studio-mates, he encouraged them to bring their own sensibilities to their parts.

"Between the alleys is a bumper like in a bowling alley," he recalled telling them. "Somewhere between here and here is what I want, but I want you to be yourself. Play how you play, within these confines."

Scarborough recruited bassist Damian Erskine, drummer Gary Hobbs and pianist Jeremy Siskind, all American jazz musicians and scholars. He added Middle Eastern collaborators Tarik Banzi, who played oud (a string instrument similar to a lute) and Mahmoud Shaikhhussein, who played doumbek (a type of drum) and riq (a type of tambourine). The result was a record that jazz trombonist Bill Watrous called "some of the most interesting, original music coming from anybody in a long, long time."

"Doug has a unique voice in jazz," said Erskine, an adjunct professor at Portland State University. "The way in which he seamlessly blends his strong jazz vocabulary with his love of other world musics is inspiring-and a total blast to play."

Erskine added: "Knowing that I had Doug's trust went a long way toward feeling comfortable interpreting the music openly. I also knew that if I wasn't hitting the mark, he would be able to direct me and get me well on my way. Trust in each other as musicians was the key to the success of this musical endeavor."

The album blends sounds both familiar and unfamiliar to Western ears. On the track "Red Pill," for example, Scarborough's trombone runs across musical phrases peppered with quarter tones while Middle Eastern rhythms provide the scaffold for mixed meter time signatures. The song relaxes for a moment with piano interludes from Siskind that evoke the romance of jazz standards, but soon, the horns return and the percussive doumbek and oud round out the Middle Eastern sounds once more.

A major influence on Scarborough's approach to Bridges was acclaimed American guitarist Shawn Lane (1963-2003), with whom Scarborough toured.

"Ten years before I did, Shawn caught fire on Pakistani music," explained Scarborough, who has also performed live with jazz luminaries such as Arturo Sandoval and the New York Gypsy All Stars. "He wound up playing with the top Pakistani musicians in the world. He reinvented his career by learning this entirely different musical vernacular."

Scarborough's own jazz fusion earned praise from scholars, composers and performers. Gregg Akkerman, a former jazz studies professor at the University of South Carolina Upstate, pianist and author of books including Experiencing Led Zeppelin: A Listener's Companion (Rowman & Littlefield, 2014), wrote: "Scarborough has accomplished the daunting task of combining complex rhythms and exotic harmonies with improvisational swagger, resulting in something as sophisticated as it is downright fun."

Scarborough's next project is a follow-up to Bridges. The Color of Angels, to be released this year, will feature collaborations between Scarborough and a new group of Middle Eastern musicians.

A Study in Empathy

When working with music students in jazz theory or pop music classes, in one-on-one lessons or conducting them in Whitman's Jazz Ensemble I, Scarborough demonstrates a similarly collaborative style. At an ensemble rehearsal two days before the group's fall end-of-semester concert, his tasks included finding fixes for individual players, solving problems for whole sections and mentoring soloists.

How he defines his role: "Negotiating and managing all the ideas and bundles of energy to get to that point down the road-that final product, which is going to be exciting and moving and clean and motivating."

For the brass section, some of whom struggled with a difficult note, Scarborough advised: "Music is about going from point A to point B." Leave out the note before the troublesome one, he suggested, to "make sure your arrival points are hit and you're playing together with your neighbors."

Scarborough then stepped aside to listen to the group's soloists. After Seattleite and economics major Jake Barokas '18 ended his guitar solo, Scarborough praised the student's fervor but suggested that he hold back some for the concert. Eve Goldman '18, a Spanish and psychology double major from Portland, then rehearsed the Portuguese vocal introduction to the song "Black Orpheus" (written by Brazilian guitarist and composer Luiz Bonfá for the 1959 movie of the same name and arranged by Eric Richards), pausing to listen to Scarborough's feedback on how she and her bandmates might better coordinate. 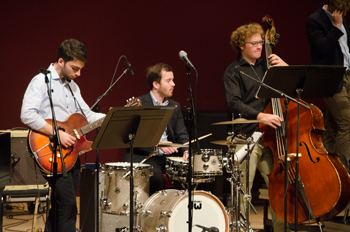 Goldman has taken several classes with Scarborough, including Meet the Beatles and his Songwriting course. In the latter, she wrote a Spanish-language song. Scarborough scored horn parts for the piece and Goldman has since performed it with the ensemble.

"It was a truly incredible moment that Doug provided for me, and I am forever grateful," she said. "Doug gave us enough structure and more freedom to write music-something I have wanted to do for a long time. He provides constructive criticism while maintaining an attitude that makes everyone excited to work with him and play music."

Scarborough's excitement stems in part from his belief in his student collaborators.

"Every student is very, very valuable," he said. "They think in different ways, they learn in different ways, and because of that, they are going to contribute to society in very different ways. I want them to know that they're respected and listened to, so part of my role is to listen to them and be with them as they explore whatever they're exploring."

History major Steven Aslin '18, who plays drums in the Jazz Ensemble, appreciates Scarborough's interest in helping him grow his musical abilities through performing outside of Whitman.

"I come away from every gig a better player," Aslin said. "Doug has what I call the ‘look,' where, in the middle of the tune, he will very suddenly look over at you and have one of two expressions. One says: ‘Nice, man,' and the other, ‘Um, what're you doing?'" he said with a laugh. "That constantly keeps you on your toes."

Scarborough believes the benefits of studying music go beyond the rehearsal room.

"When students get away from music, they can synthesize, harmonize, collaborate, cooperate, respond with razor-sharp quickness," he explained. "What the study of music does is make some connections for you in ways that are very mysterious, but have parallels in their other enterprises in life."

Musical performance is about working together in the moment and understanding other players, he added-thus enhancing empathy. "And if we can teach empathy, then we really have done a good service to that student. They'll have more successful relationships, a more successful family life, better interactions with coworkers," Scarborough said.

That's only part of what music teaches, he concluded. "You don't have to know how it works to know that it works. I'll leave that for somebody else to figure out."