The Radical Art of Collaboration

Last semester, students in Associate Professor of Art Nicole Pietrantoni's Intermediate and Advanced Printmaking courses worked with Whitman faculty and staff members to create a duo of related posters inspired by radical political printmaking-one envisioned jointly with their collaborator and one crafted on their own. Then, students in Assistant Professor of Art History and Visual Culture Studies Lisa Uddin's Introduction to Art History and Visual Culture Studies wrote curatorial statements about the solo pieces.

Here are two of the five collaborations exhibited at the Fouts Center for Visual Arts last December.

(1) "Even in Dark Times," a print by Mercer Hanau '18, and (2) "Connection," a collaborative print by Hanau and Senior Assistant to the President Jennifer Casper. 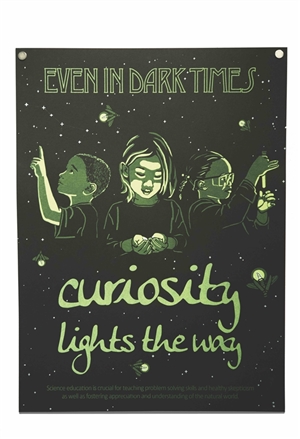 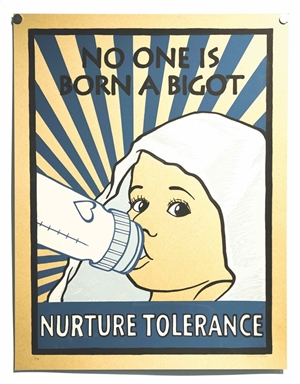 "We decided we wanted to create a hopeful message that called on the viewer to be an agent for positive change. The design was influenced by the classic radial sunburst patterns and graphic style in many political posters. We chose the color scheme and imagery to evoke the slow, dedicated work of raising children to be tolerant and empathetic people."

"The Charlottesville protests [supporting white supremacists in August 2017] took place just as this project launched. Themes of racism, bigotry, hate, white supremacy, ​peace, love, tolerance and change all percolated to the surface. The innocence of our image, portraying a clean slate of possibilities, conveys a strong message that each of us has the opportunity to effect positive change for generations to come."-Staff collaborator Jennifer Casper, senior assistant to the president, on working with Hanau

"The fireflies illuminate the faces of children, allowing them to be seen in the darkness of the night. Furthermore, the contrast of light and dark is depicted through the kids, who suggest the ability of science and curiosity to lead the world to a better place."
-From curatorial text written by Peter Stephens '21, from Auburndale, Massachusetts, about Hanau's print, "Even in Dark Times"

(3) "Ingredients," a print by Alyssa Taylor '18, and (4) "Ponderosa Pine," a collaborative print by Taylor and Lecturer of Biology Susanne Alterman. 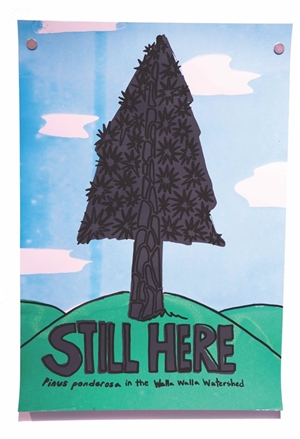 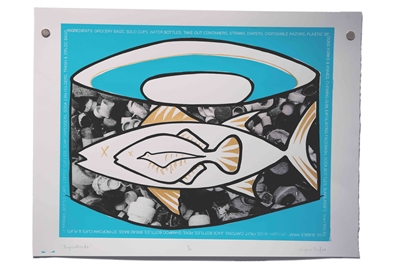 "I really enjoyed working with my collaborator. ... I also learned a lot from my collaborator, and she even took me on a drive into the Blues to look at Ponderosa Pines, the subject of our [collaborative] print."

"The challenge of making a political poster about climate change for me was: what can I stand behind? What can I promote without laying a guilt trip or invoking fear? The tree's geographic distribution will likely shift to higher elevation in the Blue Mountains and the tree may become more common than it is now. ... Under climate change, ponderosa pine will likely still be here, which is what we hope for ourselves."
-Faculty collaborator Susanne Alterman, lecturer of biology, on their joint work, "Ponderosa Pine"

"This print calls out the human tendency to selfishly pollute the oceans and illustrates how this act is actually an indirect form of self-destruction. The piece has an accusatory feel and forces the viewer to experience a sense of guilt for the negligent act of polluting oceans."
-From the curatorial text written by Kendall Stevens '20, from Anchorage, Alaska, about Taylor's print, "Ingredients"