Kaitie Dong ’18 and Cassandra Otero ’18 share more than having lived in the same section in Anderson Hall as first years. They also advocate for social justice—and move the bar forward in significant ways. Their resolve earned them Presidents’ Leadership Awards at the Washington Campus Compact’s Students Serving Washington Awards ceremony in Seattle last spring. Dong, a politics major, and Otero, a sociology major, were the first Whitties to garner those honors.

Now entering their final year at Whitman, both have already left an indelible mark on the college and community. Vice President for Diversity and Inclusion Kazi Joshua, who has worked with them, praised their sensitivity and gumption.

“Kaitie is committed to the betterment of our world and the transformation of Whitman into a place where everyone truly belongs. She is always thoughtful, diligent and committed to the work at hand,” he said. “Cassandra has been consistent in her advocacy for human rights and social justice in many areas as well. Her passion and clarity of thought exemplify the best of what a liberal arts education can do.” 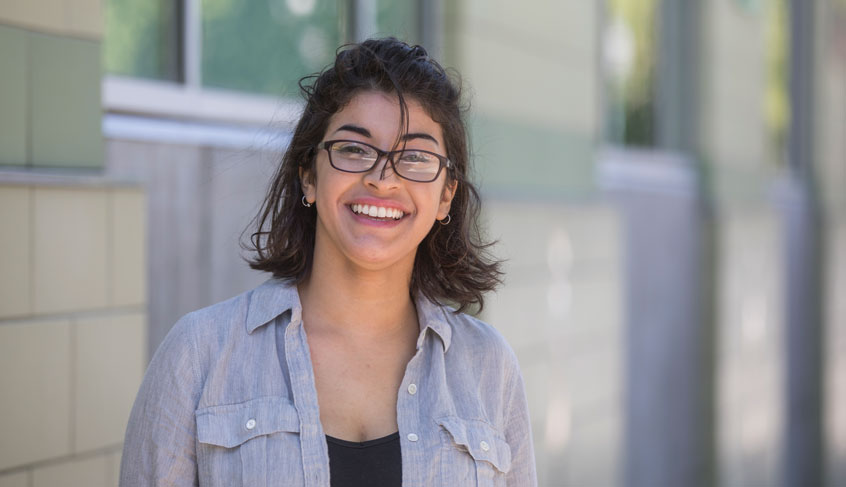 Dong, a Seattle native, felt the first stirrings of activism in Introduction to Gender Studies, taken her second semester.

“It was so eye-opening,” she recalled. “I learned terms such as intersectionality and unmarked categories, and that just blew my mind. I was telling my friend, who was a senior politics major at the time, and she was like, ‘Okay, if you like thinking about theory and how power functions, you should take a politics class. So I took International Politics in the fall of my sophomore year, and I just completely loved it.”

That fascination with systems of power and the rhetoric that surrounds it was part of what drew Dong to participate in the Power and Privilege Symposium, a yearly tradition at Whitman in which classes are canceled and students spend the day attending workshops, panels and presentations focusing on race, class, gender and sexuality. Last year, she served as co-director of programming.

The task benefited her as much as her fellow students. “It was a new experience to be talking about social justice issues every day,” she said. “We wanted to be intentional around being respectful of people’s political views, but where’s that line between respecting political views when they’re coming from a place of power? Where is that balance?”

Her co-director, Alondra Contreras ’18, a race and ethnic studies major, called her mindful and can-do attitude contagious. “She is a genuinely kind person,” she said, “and it shows in her advocacy for amplifying unheard voices and creating safe spaces.”

Dong credits much of her enthusiasm for promoting equity and accessibility to her upbringing. “My mom and dad and family always taught us that golden rule of ‘Treat others the way you want to be treated,’ and everyone should be treated with care and love and respect, no matter what kind of background they come from.”

Joshua worked with Dong on the Power and Privilege Symposium and on Whitman’s Strategic Planning Committee, a group of students, staff, administrators, board members and alumni charged with defining the college’s long-term priorities. For the latter, Dong met with dozens of student groups to gather ideas and presented them to committee members. Joshua commended her for helping build “a legacy of a Whitman deeply engaged in the proposition of equity, diversity and inclusion in a broad sense of these words.”

Former Associated Students of Whitman College President Arthur Shemitz ’17, a gender studies major, got to know Dong as a fellow student representative on the Strategic Planning Committee, and said that the assemblage “was enriched by Kaitie’s contributions. She is unafraid to disrupt consensus and push a group in productive new directions while always faithfully representing student concerns and pushing for a more inclusive campus community.”

Over the summer, Dong turned her attention to another important constituency concerned with the future. She interned at the Refugee Women’s Alliance (ReWA) in Seattle, tutoring kids in afterschool programs and helping plan an annual gala.

Her supervisor was psychology major Emily Tomita ’08, youth program manager at ReWA, whom she met during a Whitties Helping Whitties networking event. Tomita called Dong “thoughtful” and “intuitive,” with “a strong desire to learn and grow.”

Dong also took a summer class at the University of Washington on gender and globalization; it resonated with some of her experiences at ReWA working with immigrant and refugee families from Somalia, Ethiopia, Mexico and Vietnam because many face overlapping challenges like religious discrimination and racism in schools.

“The kids that I worked with are so resilient in so many ways,” she said. “Not only are they dealing with normal kid drama like gossip and crushes and everything, but they’re so strong in terms of being a kid in a time where there’s just rampant racism and Islamophobia.”

While Dong acknowledges the importance of her leadership gigs, she sometimes confronts a sense of obligation that comes with wanting to be seen as an “accessible PoC on campus,” she said. This pressure to succeed on behalf of others can feed into a double standard for students of color, something Dong discussed with Otero during the leadership awards, at which both said they felt a slight case of imposter syndrome from being in the spotlight.

“The idea is how we uphold all these powerful people of color, and they should be upheld, but then we expect all PoCs to be superheroes and it’s not okay to be ordinary,” Dong said. “Oftentimes being a person of color in such a white society is hard in itself.”

Striking that balance while practicing self-care is “definitely a part of learning and growing at college,” and Dong still considers herself an optimist at heart.

Otero, who hails from Livermore, California, and received a Governor’s Award in addition to the Presidents’ Leadership Award, echoed Dong’s sentiments: “As a student of color, you’re not used to the attention,” she said. “Kazi was saying we need to take pride in our accomplishments, that it’s not only about us, that it’s about bringing visibility to our communities, being proud of where we come from,” she said. “It’s a pressure that a lot of people of color put on themselves, being like, ‘I need to be the best I can be, express this as clearly as possible so I can represent.’”

Much like Dong, Otero gravitated toward her major—sociology—after a captivating class caught her attention: Social Problems with Assistant Professor of Sociology Alissa Cordner.

“Looking at the larger picture of systems of domination and oppression, seeing the institutions and the social systems that govern our society, opened my eyes,” Otero said.

More specific courses like Latinos in the U.S, taught by Associate Professor of Sociology Gilbert Mireles, further prompted her to see “how everything is a construct, latinidad is a construct, because a Mexican American in SoCal has completely different lived experiences to a Nuyorican [Puerto Rican New Yorker].”

“I found some incredible role models, upperclasswomen who took me under their wing and I really looked up to them,” she said.

A two-week Borderlands trip the summer before her sophomore year proved to be another tipping point. “We talked to migrants and activists and attorneys and some nonprofit workers, and then we had this reflection time, and I was like, okay, now what?”

Such big questions inspired her and fellow sociology major Jackie Bonilla ’16 to cofound Borders as Method (BAM), a student club committed to educating the campus and Walla Walla community about immigration issues.

“The 2016 presidential election kind of put a fire under our butts, and that’s when we started to become more visible on campus with the sanctuary campus petition that got over 1,200 signatures,” she said. “Kazi was appointed as the undocumented student advocate, and he created another working group including staff and faculty and members of BAM to continue discussing and trying to strategize how to protect undocumented students.”

Joshua put it this way: “It became clear that certain members of the Whitman and Walla Walla community would become more vulnerable because of changes in the enforcement of immigration policies.” He continued, “Cassandra was instrumental in advocating for practices and procedures at Whitman that would ensure that those directly affected were adequately supported, so that their studies were not disrupted. At the same time, Cassandra was active in the community of Walla Walla on immigration issues, recognizing that whatever affects one affects all.”

She also met with activists and legal experts in Tacoma about its immigrant detention center and helped organize Immigration Week at Whitman; the annual event includes teach-ins, discussions, musical performances and guest speakers, such as a former detainee from the Tacoma lockup.

What’s more, Otero spent last year interning at Hernandez Immigration Law, a local practice at which her friend and BAM co-founder Bonilla now works full time as a paralegal. Otero filed Deferred Action for Childhood Arrivals forms, sat in on appointments with clients and helped with translation, among other responsibilities.

“She was so enthusiastic and eager to learn,” said attorney Wendy Hernandez, the principal at the firm. “No matter how busy she was with other community activities, she regularly came in looking for projects to complete, finished them and then zipped back to campus.”

Though Otero speaks Spanish fluently, she said it took her a while to feel comfortable with her language ability because she mostly spoke

English growing up, even though her dad spoke Spanish at home and her mom is a Spanish professor at a community college.

“The second semester, they had me interpreting for intake appointments, and that was stressful because I would sometimes second-guess myself and my translation. But since it’s on-the-go, you have to make a quick decision and hope it’s as clear and accurate as possible.”

Her persistence paid off: Otero gained newfound confidence to speak up for what she believes in. At a recent conference in Seattle on facilitating civil discourse, she noticed that organizers neglected to incorporate race into the conversation: “I felt empowered to say, ‘Yo, could you please talk about race?’ Because one of the presenters was like, ‘As a facilitator of civil discourse, you need to be a good citizen.’ What about non-citizens?”

“Cassandra draws on the theoretical knowledge obtained in her sociology courses and applies this to advocacy efforts,” said Mireles, Otero’s adviser. “While she may come across as quiet and thoughtful, she possesses great inner strength. She takes time to assess a situation, gather input and then act. I take this to be a mark of maturity.”

Her current undertaking entails creating a Whitman alumni of color network. This summer, Otero researched names of past student leaders with the goal of fostering more contact, mentorship and solidarity between graduates and students.

Dong, too, strives to bring people together and expand possibilities. She believes that building relationships is “what higher education is really made of” and an integral part of motivating allies to walk their talk.

Summing up her own drive to advance Whitman and beyond, Otero said that if she had one piece of advice to give herself when she arrived on campus as a first year, it would be: “Know that you’re good enough and that your voice needs to be heard.”