Coming to the Table

On a crisp, dark November evening, 16 Whitman College students travel to the Washington State Penitentiary (WSP) with their professor and course assistants.

It’s a journey they’ve made each Tuesday since the beginning of the fall semester.

They drive the 2 miles from their beautiful campus to the outskirts of Walla Walla. They pass by the original, historic brick penitentiary, with its manicured lawn and white fencing to a parking lot on the north side of the institution — the main entrance to a modern prison made up of more than a dozen nondescript concrete block buildings that now house all but the minimum-security inmates at WSP.

Once the students arrive, they know the drill. Like seasoned travelers at a small airport, they line up for security. They remove their coats and place their schoolwork in large plastic trays for screening. They’ve left most their things, including their phones and keys, behind or locked in tiny lockers.

A correctional officer pats down each student before they proceed through a metal detector. Next, they line up to hand over their ID to another officer who gives them an electronic visitor pass in exchange. Everyone in the group must be processed through this checkpoint before they can be escorted into the prison.

Once “inside,” they’re actually outdoors. Before the students and teaching team reach the small chapel that serves as their classroom, they must pass through numerous wide and well-lit fenced corridors topped with endless rings of razor wire.

The grounds are quiet during the dinner hour as they pass by housing, medical and specialty units, clearing 11 locked gates and doors along the way. On the long walk, they talk with each other about their studies, workloads, professors, friends, plans — college stuff. When they reach their destination, another officer stands ready to check their names on a list before they can enter their makeshift classroom.

It’s well into the hour, and there’s still more to do before their class can start.

They work together to move the chapel pulpit and chairs aside. They carry in tables from an adjacent storage room and set up two rows of four tables with four chairs at each. Two students sit down at each table. And they wait.

Sometime in the next 15 minutes or so, if all goes as planned, the rest of their classmates will arrive. This particular evening, 14 Whitman students from another walk of life arrive from inside the penitentiary. The room is immediately charged with new energy. The “inside students” — a diverse group who range in age from early 20s to well over 50 — carry Whitman folders and enter the room with smiles and warm greetings. They eagerly join their groupmates, the “outside students,” at their respective tables.

Finally, Philosophy 219: Case Studies in Applied Ethics can begin. Today’s topic for small group discussions is a charged and heavy one: the use of drones to take out suspected terrorists.

It will be about two hours before the two groups say goodbye for another week — and there’s important work to be done in the meantime. 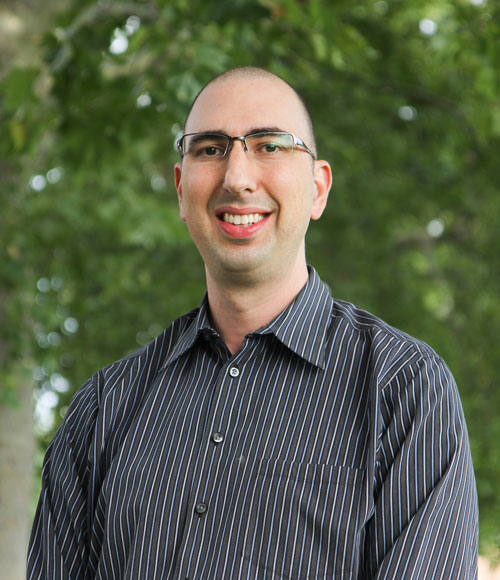 Senior Lecturer of Philosophy and General Studies Mitch Clearfield designed the Whitman course. He wishes that we, as a society, could have more settings like these eight tables — places where people from different backgrounds and views can come together to have meaningful and productive conversations about things that matter.

“Our society is increasingly polarized. As a result, we seldom discuss values with others who don’t already share our perspectives,” Clearfield said. “I think that’s a serious problem, for at least two reasons. First, that leads to bad decision-making processes, where people or groups do whatever they want without serious engagement with others. Second, it leads to bad decisions, because they’re made without considering all of the relevant information, ideas and perspectives.”

In his course, students work in groups of four, with two students from each institution, on ethical issues, such as the drone case. Clearfield adapted the cases from Intercollegiate Ethics Bowl competitions, put on by the Association for Practical and Professional Ethics. The end of the semester wraps up with a public forum where the groups present their work.

Before the fall semester students ever met, they had to apply for the class and be carefully vetted by Clearfield, WSP, and course assistants Becky HaneyNixon, a counselor at WSP, and Kathy Farrell ’95, who has experience working in corrections and helping released offenders re-enter society.

To be considered for the class, the inside students — some of whom are serving life sentences — had to demonstrate good behavior and meet other criteria. The outside students were interviewed and passed background checks. The teaching team wanted to be sure that all the students were committed and were there because of an interest in the content and in growing as thinkers — not because of the novelty of the class and setting itself, Clearfield said. 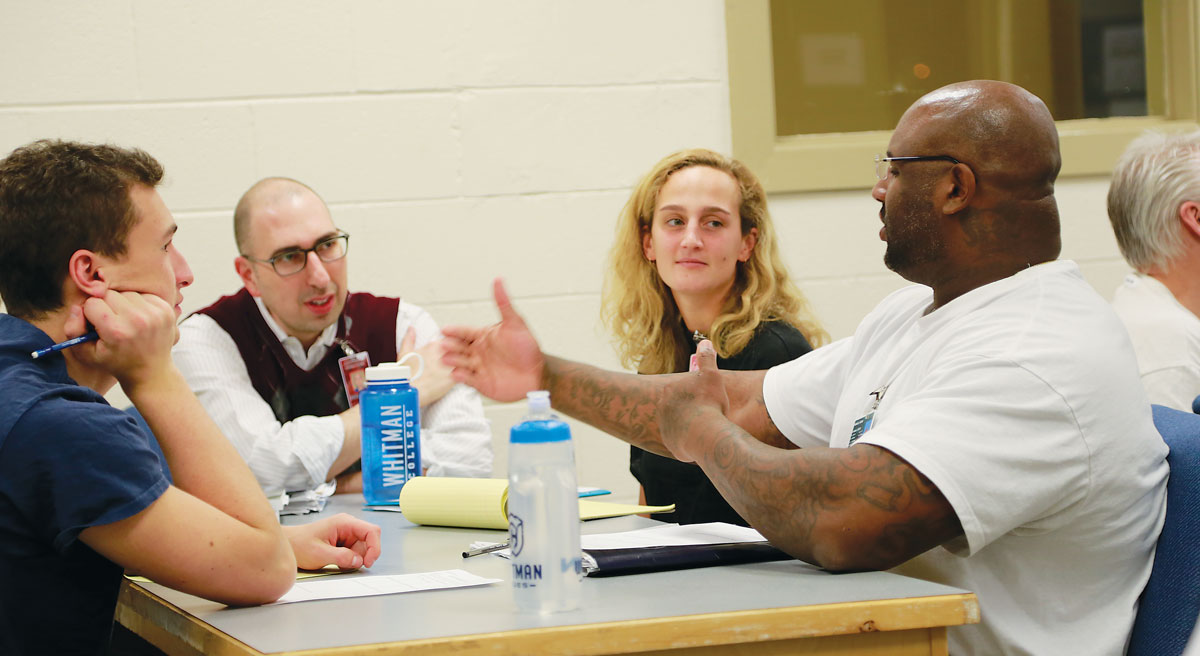 Exploring Issues from Every Angle

In PHIL 219, students learn to scrutinize controversial issues, and they develop thoughtful dialogue skills that lead to greater understanding and better conclusions. It’s a unique learning opportunity that Clearfield said he can’t replicate in a campus classroom.

“Bringing these groups and individuals together allows us to have types of conversations and form a type of community that simply wouldn’t exist otherwise,” he said.

It didn’t take long for the novelty of the setting to fade away and the content and conversations to become what mattered, said a number of the outside students when asked about their experience.

“It’s not just a cool class that happens at the prison. It’s my ethics class,” said Grace Dublin ’21, a sociology major from Boston, Massachusetts, who served as a course assistant for the fall class. Dublin took the course last spring.

“In my head, I had worked up all these ideas of how jarring it would be to be in the prison and it was far less jarring than I anticipated,” said Susanna Williams ’20, a sociology major from Burlington, Washington. “It surprised me how easy it was to just dive into the curriculum.”

Each team unpacks the ethical dilemmas from different perspectives, recognizing biases and uncertainties and exploring solutions based on research and ethical principles from philosophers. Those ideas and points of view often come as the students grapple with questions: What facts do we have? What’s unclear? What makes one action right and another wrong? What decisions or actions are the most moral? Which do the least harm? Which do the most good? What might help? What can we agree on?

During class, Clearfield and his teaching assistants observe and pull up chairs at various tables to help push the discussions forward. The students discover early on that there’s not an easy answer for these complex issues. “We really try to stress creative problem-solving,” Clearfield said.

“It’s about having a greater understanding of the whole issue,” Williams said. “We tend to get caught up in what others think. ‘Everyone in my family thinks this, so I’ll think it too.’ In a class like this, you get to go and interrogate that.”

Clearfield’s students — inside and outside — all seem to grasp the value and magnitude of the experience.

“I value the students for having the courage to come and challenge us in ways we don’t experience in here,” said Allen,* an inside student. “This class has helped me grow and challenge ideas in very many ways.”

*Class participants who are incarcerated at Washington State Penitentiary are being identified only by their first names.

Allen first learned about the class from his cellmate, who took it in the spring. This course has inspired many discussions back in their living units, the inside students said.

“We talk about the cases a lot in my unit,” said Kieth, an inside student. “At first, we discuss the actual cases, but then the conversation moves to how these frameworks are seen in how the prison and society has handled us. Then, most precious of all, we begin to take a tentative look at our own ethical framework and how we chose to do the things we have done in our lives.”

For Clearfield, having an ethical approach to the course was intentional and mattered deeply. He wanted all his students to be and feel like equal partners in the class, and they were all held to the same high Whitman College academic standards. Whitman has offered courses in the penitentiary for several years, and Clearfield took over as program organizer in 2019.

“One of the most important things about this class is that it, in and of itself, was ethical,” said Nick Rapp ’20, an environmental humanities major from Louisville, Colorado. “Mitch did everything he could to make the workload as even as it could possibly be. I think having the class be so equitable for both sides and providing access in that way is very humanizing.”

That equity is reflected in how the work is shared, the language used to refer to the participants, as well as access to Clearfield. Outside students are able to visit him for assistance on campus during his office hours. To give inside students the same opportunity to talk and get help, every Saturday afternoon during the semester, Clearfield and the course assistants held a study hall at the prison. As part of their grade, outside students kept digital journals that Clearfield replied to weekly. His inside students wrote their journal entries in notebooks that he collected and replied to with his own notes.

Students were also expected to gather and consider research on the topics. Outside students took the lead collecting the research online or from Penrose Library, often printing it out and providing it to Clearfield to take to study hall. From there, the study baton was passed to the inside students whose role it was to read the research and report back to their groupmates on what they learned. The shared workload was managed by the teams themselves, who held one another accountable.

“It means a lot to be viewed as another student, peer, and to help the group, not to be just another inmate,” said Marty, an inside student.

“Inevitably, a class like this makes anyone think back about their own decisions and life situation. In that sort of way, I think it equalizes the playing field,” she said. “This isn’t just a class with inmates who have faced ethical decisions, we’re implicated by that, too. I think that’s been the case for all of us.”

Near the end of each class session, Clearfield asks everyone to form a circle with their chairs. It’s a closing ritual that his students look forward to and appreciate. Together, the larger group is like a winning team in a locker room — bonded, exhilarated and feeling good about the difficult work they’ve done. Around the circle, they take a few minutes to share thoughts and laughs.

It’s usually a correctional officer who ends each session by reminding the group it’s time to go.

And those tables that the outside students originally set up? Again, there’s equity in the equation. When all is said and done, the inside students take the tables down and put the chapel back together while their classmates are escorted out of the facility.

“I do hope that the students have gained understanding of the ethical frameworks. I do hope that they have made progress in addressing these very pressing, practical issues. I sincerely do,” Clearfield said. “But I think even more important than that is the value of how we functioned together and the kind of community we were able to create. I really hope the class can serve as a model that we can all draw on when there’s a need to come to the table for deep and meaningful conversation.”

Philosophy 219: Case Studies in Applied Ethics was supported by a grant from the Andrew W. Mellon Foundation. The grant has helped Whitman College innovate the curriculum and promote community engagement.