It's a Thursday night in downtown Seattle. Reflected in the rain-slicked streets are the red and blue lights of a police cruiser. Inside, an officer is running a records check on an individual carrying a few grams of drugs. The records come back: no felony convictions for violent offenses, no suspicion of promoting prostitution or involving minors in drug crimes. The cop gets out of the car and offers the individual two options. One is King County jail. The other is referral to a case manager with the LEAD Program.

The program started with a simple question, according to National Support Director Kris Nyrop '79: "What if we could make arrest the strategy of absolute last resort for police officers when they're encountering individuals engaged in low-level drug activity?"

Nyrop, an anthropology-sociology major at Whitman, has a long history in public health and community outreach. From 1997 to 2007, he was executive director of Street Outreach Services. He has also worked in the Seattle-King County and Washington State public health departments; on HIV/AIDS prevention; and on harm reduction and drug policy reform. Currently, he works to implement LEAD in other jurisdictions for the Public Defender Association (PDA), a nonprofit that focuses on justice system reform. "In the city of Seattle, the African American population is about 8 percent, and about 60 percent of those who were being arrested for low-level drug crimes were African American," Nyrop said. "So we had enormous racial disparity and there was considerable debate over what the cause of that disparity was."

In 2005, there was contentious debate about racial bias in drug arrests, and the PDA was defending many of those who had been arrested for low-level offenses on the basis of selective law enforcement. Steve Brown, then captain of narcotics for the Seattle Police Department, asked the PDA, the American Civil Liberties Union and other civil rights organizations: If what you say is true, what should we do differently?

"The reality was that nobody had an answer," Nyrop said. "Jokingly or rhetorically, one answer was: end the war on drugs, which was slightly above the pay grade of a captain in the Seattle police department! The other answer was: start arresting four or five times as many white drug users as now."

That wasn't a viable option, either. However, Nyrop's background in public health and involvement with communities that were subject to higher levels of drug arrests put him in the middle of the conversation.

By 2009, stakeholders, including community groups and services providers, signed off on the plan for LEAD. Advocates within the criminal justice system included Capt. Brown—now in charge of downtown Seattle's West Precinct—and King County Prosecutor Dan Satterburg. In an interview with MyNorthwest.com, Satterburg called LEAD "the most successful program that we have to get people treatment they couldn't otherwise afford, and get people back into a situation where they have hope in their lives and turn them from offenders into taxpayers."

When it launched in 2011, LEAD was the nation's first pre-arrest initiative for low-level drug offenders. Now, nine other cities across the country, from New Mexico to Maine, have modeled programs after it. Three more will launch in the next couple of months and up to 15 others in the coming year.

"What we've seen in the jurisdictions that have come after Seattle is that they are telescoping [our] timeline dramatically," Nyrop said.

Santa Fe, New Mexico, took three years from start to implementation. Albany, New York, took 14 months. And Fayetteville, North Carolina, was up and running in less than a year.

Brendan Cox was chief of police in Albany when the city implemented LEAD in April 2016. He retired in January after 23 years on the job and is now director of policing strategies for LEAD's National Support Bureau.

After attending a LEAD presentation in New York City in 2013, "I was pretty much sold on it," Cox recalled. Previous attempts at diversion programs had had mixed results and "it was clear that LEAD was a route to get true stakeholder commitment."

Cox's department traveled to Seattle, where Nyrop walked them through the implementation process. Next, 342 Albany officers were trained in LEAD protocols.

Now, "LEAD is becoming part of the culture of the department. We have a solid group of officers that are truly engaged in the initiative and working to help people through keeping them out of jail. Kris is a true champion of LEAD and does an amazing job sharing his knowledge with other sites," Cox said. 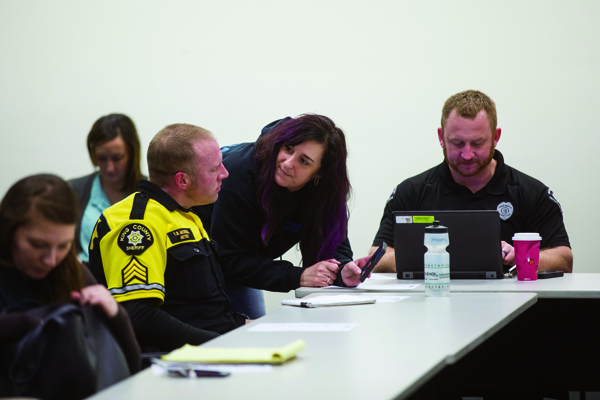 The Case for Option 2

When the choice is county jail or LEAD, almost everyone chooses the latter. What happens next?

"The officer calls the case manager and it is an actual direct handoff," Nyrop explained. "The person is given from police officer custody right into the warm enveloping embrace of a case manager."

Within the next 30 days, the individual must complete a full psychosocial intake. After that, the case manager works with him or her to determine the range of services needed.

Addiction treatment is top of the list, but "a surprisingly large percentage have mental health issues and regular health issues," Nyrop said. "Many of them have been homeless for 20 years, have not held a job in 20 years or more. No one entity is going to be able to do a tooth extraction and wound care and drug care and mental health treatment and, oh yeah, housing and employment, at the same time."

Evergreen Treatment Services, an addiction and social services provider with more than 40 years experience in Western Washington, is LEAD's broker in Seattle, connecting participants to services. So far, 412 individuals have entered the program in Nyrop's city alone.

LEAD is certified as an evidence-based intervention program by the federal government, has been highlighted in federal funding packages and has been featured in national media like PBS's Frontline and The Huffington Post. But for its first two years, it was a pilot program.

Quantitative evaluation was lacking, but "the qualitative and anecdotal level of support in the community" was notable, Nyrop said. "Some of the other neighborhoods could see what was happening in Belltown and they went to the city council and the mayor and [said]: How come [they] get LEAD and we don't?"

That community pressure ensured funding for LEAD, which expanded that year to the whole of downtown. (When it started, LEAD had $750,000 in annual funding thanks to multiple grants, though it used only $435,000 that year; now, the city and county fund the program at $2.1 million.) But the caveat was that the program had to provide evaluation data down the line.

Those data came from an independent team of evaluators from the University of Washington, led by Susan Collins, a clinical psychologist and associate professor; Seema Clifasefi, an assistant professor; and Heather Lonczak, a research scientist. All three worked with the university's Harm Reduction and Research Treatment Lab at Harborview Medical Center.

According to Nyrop, "The recidivism results were so surprising that [the team] actually held off on issuing that report for a couple of months and reran their data in multiple different ways."

LEAD participants two years out from their initial referral were 58 percent less likely to be rearrested than those who had chosen option one—the criminal justice system.

"This is so much better than other types of programs that are out there ... that everyone looked at that with a note of disbelief, like, how is this even possible? It dramatically exceeded even our best hopes."

Nyrop and his team are also eager to see if the program is even more cost-effective in other cities—when LEAD started, it paid out of pocket for services that are now covered by Medicaid and the Affordable Care Act. A short documentary by Brave New Films shows just how much cheaper it is already for Seattle to divert low-level offenders away from the criminal justice system: 30 days of LEAD cost the city $240 per participant. Thirty days of jail time cost $3,104.

Quantitative evaluation is only part of the picture. Nyrop is "a firm believer in qualitative, ethnographic-style information," which is no surprise given that he earned a master's degree in anthropology from the University of Washington.

But anthropology wasn't always in the cards.

"I came to Whitman convinced that I was going to be a political science major," he said. But he "got hooked on anthropology the first semester."

Professor of Anthropology Emeritus George Castile, the founding member of Whitman's anthropology department, was a source of inspiration.

"[He] was an enormous influence on me, and I respected him greatly. His teaching and the stamp of his intellect are definitely over a lot of the things I've done in the years since then."

Nyrop has maintained his connection to the college: As well as a stint as an O'Donnell Visiting Educator, he received the Alumni Association's Alumnus of Merit Award in 2012. And he continues to collaborate with Associate Professor of Anthropology Suzanne Morrissey on bringing Whitman interns into the LEAD offices.

"Not only does Kris receive widespread praise and the respect of professionals working in public health across this country and beyond, he is also accepted and loved by the people whom he and his programs serve," Morrissey said. "Over the years, I and the students who have worked by his side have learned empathy and patience, and the impacts of honest, hard work on people's lives."

Many of those students conduct semi-structured, open-ended interviews with LEAD participants, interviews which "have actually become one of the single greatest sources in terms of pitching LEAD to other jurisdictions," Nyrop said. 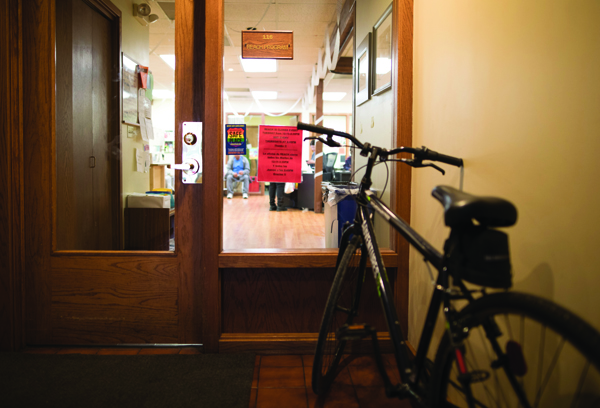 Lily Monsey '17, an anthropology major, interned at LEAD in 2015 thanks to a Whitman Internship Grant. Monsey conducted ethnographic interviews with participants to contribute to a qualitative study on the effectiveness of the program.

"I was excited to return to urban Seattle, where I grew up, and to engage with a program that is working hard and creating meaningful change at the community level," Monsey said.

Many of the interviewees' stories followed a narrative arc in which LEAD played a pivotal role. Much like the concept of "illness narratives"—wherein patients construct their experience with health issues through narrative—Monsey "sensed a similar thing happening when I listened to LEAD clients tell their stories. I wanted to explore the role that personal narrative plays in meaning-making and sense-making of one's life experience."

In her blog post about the internship for the Whitman Student Engagement Center, she wrote, "I have been truly amazed by these clients' forthcoming attitude during interviews," and how they "launch into detailed histories of their pasts, including both regrets and hopes."

Though the quantitative data are compelling, this kind of anthropological approach—learning about lived experience on the individual and community level—has uncovered one additional success.

"One of the things that is really incredible and not really foreseen about LEAD is how it utterly transforms the relationship between police officers and members of the community that they might otherwise be arresting," said Nyrop, who presented on law and order rhetoric and police-community relations at this year's Society for Applied Anthropology conference with Morrissey.

Before LEAD, that relationship was "not as bad as in some places, but I would hardly hold it up as a model." Now, "the spillover from the success of LEAD into other stuff has made what normally would be really hard, difficult conversations much, much easier."

According to the University of Washington study, almost all program participants report that they viewed law enforcement positively after their experiences. One put it this way: "For the first time in my life—as long as I've been involved in this dope game, which is a long time—I've seen local government reach out and offer a hand to us."

LEAD continues to serve as a model for diversion programs in cities across the country. Where Nyrop used to get inquiries once or twice a month, now it's at least one per week. And when he picks up the phone, he has a few suggestions as to what that city might do differently.