A unique collaboration brings ‘education without exploitation’ to campus.

The April snow was unexpected. To some, it was a seasonal novelty, to others an annoyance. For Roger Amerman ’80, it was a sign. The Native gods, and their hallowed sky and land, offered a blessing of sorts. It was a “purifying blanket” for the day when a Long Tent would begin to take shape on the campus of Whitman College—on land where for centuries, Indigenous peoples cherished their home among the woodlands and waters in the shadow of the Blue Mountains. 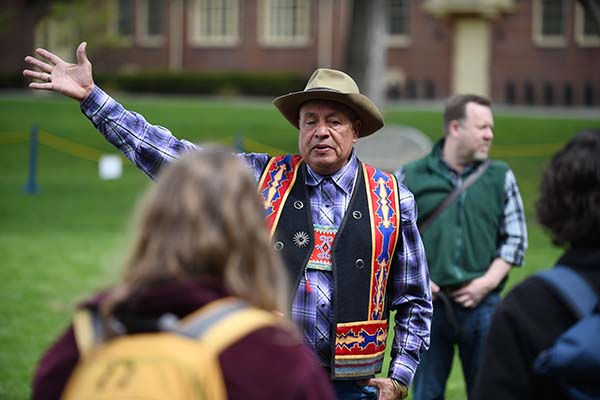 That day, April 16, 2022, Amerman was on Ankeny Field outside of Maxey Hall, in the freshly falling snow, with a small team that would help him bring to life and show respect for a deeply meaningful and iconic element of Southern Plateau Tribal heritage.

Spirits were high as the group relished the physical work—after months of planning—and the significance of what they were doing. In a matter of hours and days, an impressive structure—an authentic plateau Long Tent—rose up.

For a week of listening and learning, April 18–24, Native American dignitaries and hosts greeted visitors to the Long Tent just a few yards away from Treaty Rock. The location was meaningful and powerful—and with a story of its own, Amerman told those who attended the session “Long Tent 101.”

The granite landmark, near Whitman’s outdoor amphitheater, acknowledges the Treaty Council of 1855 held in Walla Walla. Amerman described how many upper Columbia and Snake River Indian tribes gathered just south of campus for the council, which resulted in the signing of three treaties establishing the Yakama, Nez Perce, and Umatilla Indian Reservations, and the ceding of all remaining tribal lands to the United States.

Miles before I even get to the Long Tent location, in my mind’s eye I can remember the beauty, majesty and uniqueness of this anciently designed structure silhouetted like a perfectly shaped linear plateau in the evening sky, with its extensive framework of numerous, very long tipi poles rhythmically pointing in several directions toward an infinite array of stars in the night sky.” –ROGER AMERMAN IN “RETURNING HOME”

The Stories We Tell

It was another visit to Whitman that sparked what became a multi-institution, multitribe effort to bring the Long Tent to Whitman—the first such structure to grace a modern college campus. 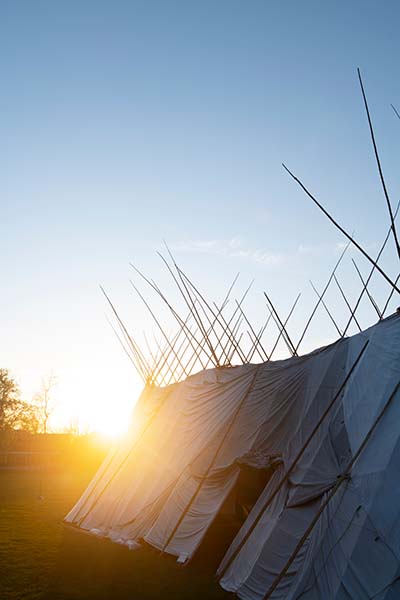 In the fall of 2021, Amerman, a renowned bead tapestry artist, was at the college for “You Are Here,” an exhibition of contemporary Indigenous artists at the Sheehan Gallery. During his visit, he encountered “The Whitman Legend,” a 1957 mural by Danish artist Kay Nielsen, which hangs in Maxey West. The highly contested piece illustrates a mythologized version of the story of the Whitman Mission—minimizing Indigenous presence, justifying settler claims to the land and celebrating Manifest Destiny.

Amerman, who is also a former park ranger at Whitman Mission, expressed a viscerally negative reaction to the painting, noting it was part of the larger problem of the historical erasure of Native presence on Whitman’s campus. His proposed an antidote: Build a Long Tent here and create programming to highlight the continued presence of Indigenous peoples, making that presence felt and heard at Whitman and in Walla Walla.

Lonnie Sammaripa  served with Amerman as a tribal leader and educator on “kwalk ineet: The Long Tent” working group. He says he was drawn to the project by the opportunity to “bring truths into light ... and educate tribal knowledge without exploiting their sensitive knowledge to the public, as some things are meant only for the tribe(s).”

For Whitman senior Jaden McGinty, an anthropology-environmental studies major from Boise, Idaho, the Long Tent “marked a distinct turning point for the way we as a community and institution interact with our Native neighbors,” he says. “It displayed a commitment to tribal sovereignty and learning from people who have often been pushed to the side by academics. It also makes clear how much more work Whitman has to do to right the wrongs of our past and build a deeper relationship with the Native communities—but the Long Tent shows we’re on the right path.”

I got to help build the Long Tent, which was a really special experience for me. Being a part of the construction meant I got to bond with the workers and Roger, in a special way. It was probably the greatest learning experience I had this year.” –JADEN MCGINTY ’23

Check out the time-lapse video and more photos. 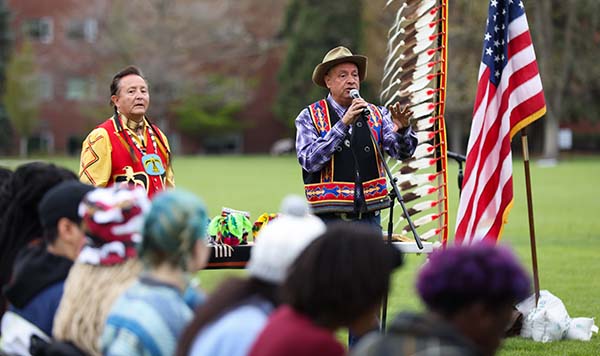 Welcomed guests. Roger Amerman speaks to the crowd at the Opening Ceremonies for the Long Tent on Ankeny Field with Don Sampson (at left), executive director of the CTUIR.

“No other college has ever been honored with the raising of a Long Tent,” said then Whitman President Kathy Murray at the ceremony. “As I stand before the Long Tent today, I am filled with a sense of wonder and thankfulness.” Incoming Whitman president Sarah Bolton was also a special guest that day, when she was able to witness the unique event and meet Native leaders from the area—and share her interest in continuing to strengthen ties between the communities.

“The Opening Ceremony was unlike anything I’ve experienced in my nearly 18 years as part of the college,” says Noah Leavitt, director of the Career and Community Engagement Center and one of the organizers. “It was energizing, instructive, dramatic, insightful and unforgettable.”

For one newly hired Whitman staff member, it was a “pleasant surprise” to learn the Long Tent would be on campus—like her worlds colliding. Jeanine Gordon is an enrolled Tribal member who grew up on the Umatilla Indian Reservation. Gordon joined Whitman as the printing and mailing manager in the Office of Communications at the end of March 2022. The campus was already abuzz with talk of the pending arrival of the tent, and Gordon was particularly pleased to see many familiar faces during one of her first weeks on campus. “It was like a family reunion for me, getting to see and visit with the featured speakers and Tribal government officials who participated that week in the different events,” she says. Not long after, Gordon accepted a spot on the Whitman College Advisory Council for CTUIR Collaboration. 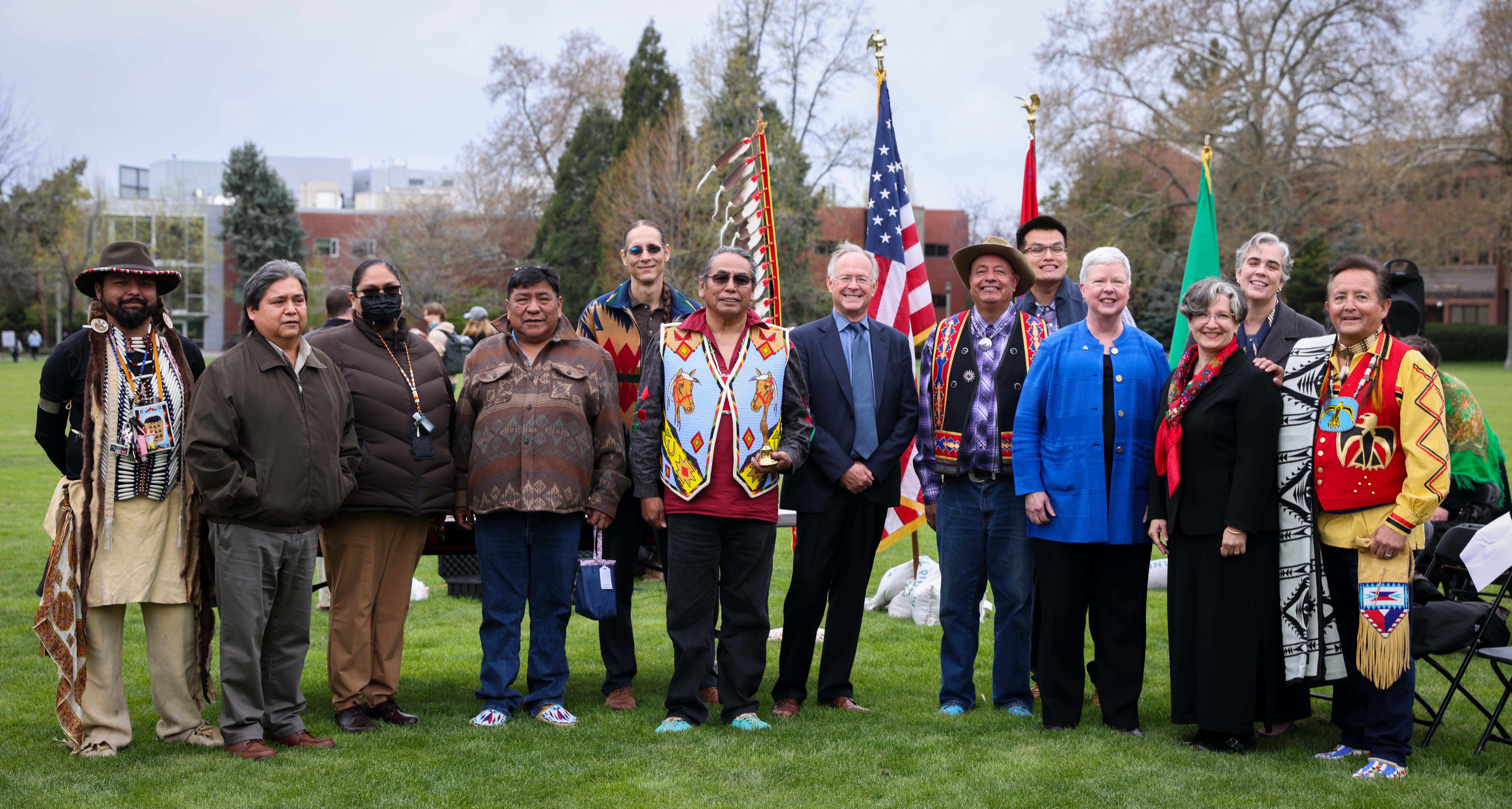 Learning in the Long Tent

Over the course of the week, nearly 200 students from more than a dozen classes had time—learning from Native elders and experts—in the Long Tent. “It became a memorable, stripped-down classroom, that thoroughly brought out the best of the bright minds at Whitman,”

Sammaripa says. “It demonstrated not all that can be taught is found in text or online, but can be brought to the attention in an intimate space. It’s how our elders taught us, and it’s something I wanted to provide for students and their higher education teachers.”

Here are a few of the courses that had class time under the poles and canvas tarps:

First Year Seminar with Jack Iverson, professor of French and francophone studies. Guest speakers Roger Amerman and E. Thomas Morning Owl provided a brief overview of the Long Tent's role in Sahaptin and Salish/Shuswap life, and discussed the impact of the removal and relocation of Native peoples.

Climate Change with Kirsten Nicolaysen, professor of geology. Guest speaker Lonnie Sammaripa discussed the ways that the Native community relies on music, poetry and the written word to build faith, share their beliefs and peacefully fight against environmental injustices.

“It was an exceptionally powerful week of conversation, learning, respect building and relationship-strengthening,” Amerman says. Sammaripa believes those special days in April were also the start of something that will continue to grow. 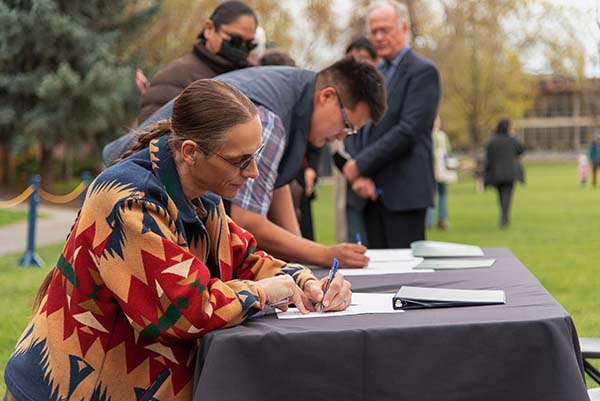 “We as teachers plant a seed by sharing our wisdom, to see that the students will grow with humility, humanity and compassion, and apply those to their work to make a positive and influential change.

The more seeds you plant to make that vibrant change, the more likeminded that positive fruition will have toward our society, Sammaripa says. “That was something that my elders taught to secure a hope for a better future.”

2017 Whitman College and the Confederated Tribes of the Umatilla Indian Reservation (CTUIR) signed a Memorandum of Understanding on May 19.

2022 Whitman College and CTUIR sign a new Memorandum of Agreement (MOA) which renews and builds on the previous document.

The agreement was signed moments before the April 18, 2022, Long Tent Opening Ceremonies. From the 2022 MOA: “This Agreement is intended to facilitate collaboration on the development of curriculum with a focus on Native American Studies, and Native American education, recruitment, and retention efforts at Whitman which will mutually benefit the signing parties.”