Meet industrious Whitties who are pairing their liberal arts education with fine wine.

Autumn transforms Walla Walla with golden yellow and blazing red leaves, a new class of students arriving on campus and an influx of visitors, who come to drink in the views and the vino during crush and fall release events.

The Fergusons’ daughter, Megan Ferguson Clubb ’79, and her husband, Marty Clubb, assisted with fall harvest activities through the early years of the winery. In 1989, the couple took over as L’Ecole’s manager and winemaker.

Today, Walla Walla’s wine scene is booming with more than 200 wineries, and L’Ecole is a third-generation family enterprise co-owned by Megan, Marty and their children, Riley ’09 and Rebecca, who have both been involved in the winery’s operations.

As the local industry has grown, so too has the number of Whitties who go on to careers in wine—and their roles are as diverse as the varieties of grapes that thrive here. 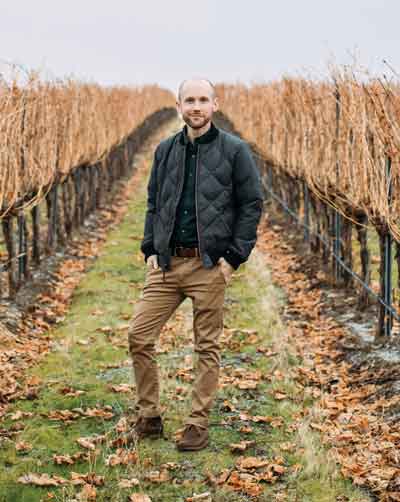 Late spring, after the threat of frost has passed, is Todd Harrington’s favorite time to walk through the vines.

“It’s just starting to warm up then, and the vines are actively growing,” he says. “You start to see the lush green glow of the vine, and you still have the green ground cover soaking up the last of the winter moisture. That’s a really beautiful time to be in the vineyards.”

Harrington often slips into such evocative language when he talks about his work as a vineyard manager, painting vivid pictures with his words, as though he’s setting the scene for a sweeping cinematic saga.

His love of storytelling is what led Harrington to major in rhetoric and film studies at Whitman. In his junior year, he studied French cinema in France. That’s when he discovered that winemaking can be a form of storytelling too.

“There are stories about the vineyards, these sites with several millennia of grape-growing, and the histories of the families who have farmed those areas for many, many generations and then even down to the details of that year, and that vintage, all kind of wrapped into one bottle that I could enjoy years or decades after those winemakers have gone and passed it on to the next generation,” he says. “That was the bridge between film and wine for me. It spoke to me on those same levels.”

A Path Through The Vines

After graduating from Whitman, Harrington started working as a tasting room assistant at Seven Hills Winery. Although he’d originally planned to go to film school, he’d fallen in love with the community of Walla Walla and was excited by the opportunities its burgeoning wine scene presented. In 2012, he enrolled in the enology and viticulture program at Walla Walla Community College (WWCC) and, after completing it, took an internship with Tranche Cellars. He eventually transitioned into the vineyard side of Tranche’s parent company, Washington Vintners, which owns three other estate brands (Corliss, Secret Squirrel and San Juan Vineyards) and sells fruit to around 40 other wineries.

Harrington initially thought he’d follow a path to become a winemaker, but says growing up in agriculture-focused Montana played a role in determining a different direction: “The pastoral way of life and business really resonated with me. There are some beautiful wineries and it’s very tranquil in the cellar, but it’s hard to beat a sunrise in the vineyard and being drenched in sunshine during the long summers that we have here.”

Today, he is vineyard operations manager for Washington Vintners, helping manage the company’s logistics, client relations, fruit sales to third-party wineries, and strategic planning and development as it replants existing vineyards and acquires new ones. “My position is somewhat of a bridge between our field managers, who are out there every day, boots on the ground, touching the vines.” His role also requires communicating with winemakers who are highly educated in chemistry and enology. “I’ve got to use both the lexicon of winemaking and wine tasting, but also of vine physiology, the biology of those vines, the terroir, the geology, the hydrology and climate of those areas. It’s really a large collection of disciplines that I have to have a grasp on, and an understanding of how those factor into the final product and the bottom line. I think Whitman did a great job preparing me for that.”

Next: In The Cellar 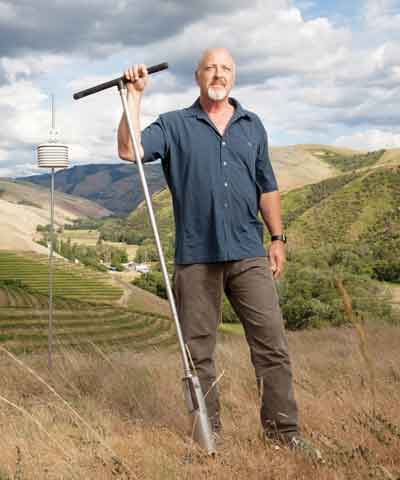 Whitman geology professor Kevin Pogue’s work in the wine industry started casually in the late ’90s, with friends in the business asking him to evaluate potential vineyard sites. After the events of 9/11 made it impossible to continue his research on Himalayan geology in northwestern Pakistan, Pogue needed a new focus. “I realized that the growth of viticulture in the Pacific Northwest in general, and the Walla Walla Valley in particular, could benefit greatly from a better, more detailed understanding of our landscape, geology, soils and climate,” he says. In the years since, he’s presented papers at national and international terroir conferences, introduced a course in terroir to Whitman’s curriculum, contributed lectures on terroir to the enology and viticulture programs at Washington State University and Walla Walla Community College, and been awarded the Washington Wine Commission’s Walter Clore Honorarium for his service as an ambassador, mentor and champion of Washington wines. Pogue has also quite literally put Pacific Northwest wines on the map: He wrote the petitions that earned the Rocks District of Milton-Freewater its American Viticulture Area (AVA) status in 2020, and made Candy Mountain and White Bluffs two of Washington state’s newest AVAs in the past year.