Rebecca Johnston ’22 was a defensive specialist on the volleyball court, until a cancer diagnosis sidelined her playing career in 2017.

“Receiving serve, digging, just tons of defense, running down balls and flying everywhere — that was my favorite part,” Johnston said.

Over the past two years, she’s put that mental and physical toughness into play against a new opponent: Osteosarcoma, a rare and aggressive form of bone cancer that occurs mostly in young children and teens. 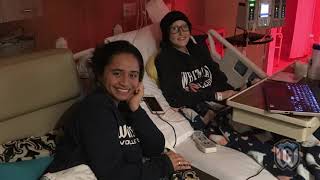 Watch a video about Johnston's journey from cancer diagnosis to her return to the volleyball court sidelines.

“It’s not genetic, just bad luck,” she said. “Cancer-wise, I’m NED — no evidence of disease. But with my type of cancer, you’re not really cancer free until five to 10 years after treatment because of its aggressive nature. Even though I’m young, it could come back again. I try not to think about it, but whenever the time for scans comes back around, it’s real.”

Johnston first discovered a lump near her left knee in July 2017, shortly after graduating from high school in Hood River, Oregon. A physical therapist thought it might just be scar tissue from overworking the quad muscles in her leg. She had been playing volleyball intensively since the seventh grade, as well as surfing and attending a volleyball camp that summer.

But during her first year at Whitman the lump turned into a painful swollen knot. The volleyball team trainers referred her to an orthopedic specialist, who discovered a malignant tumor in her leg.

“I’m not supposed to get cancer when I’m 18!” Johnston said. “My brain felt fuzzy when I got the diagnosis, but I’m definitely the type of person who doesn’t dwell on emotions too much. I cried and I was upset, but I was also like, ‘Well, let’s get this done! Let’s get through treatment and get this finished so I can get back to school.’”

The day she received her diagnosis, Johnston met with head volleyball coach Matt Helm to deliver the bad news. At the end of practice that day, her teammates huddled around her in a show of support. Johnston remembers their message: “We’re here for you.”

The strength of the team atmosphere is what attracted Johnston to play for Whitman in the first place.

“Of course, the campus is beautiful and the academics, the classes and professors are all great, too. But the family that the volleyball team creates is what really solidified it for me,” she said.

Initially, Johnston wanted to continue attending classes during her cancer treatment, but the impact of chemotherapy treatments forced her to take a medical leave for the remainder of the year. Surgery removed the tumor and implanted an artificial knee in Johnston’s left leg. 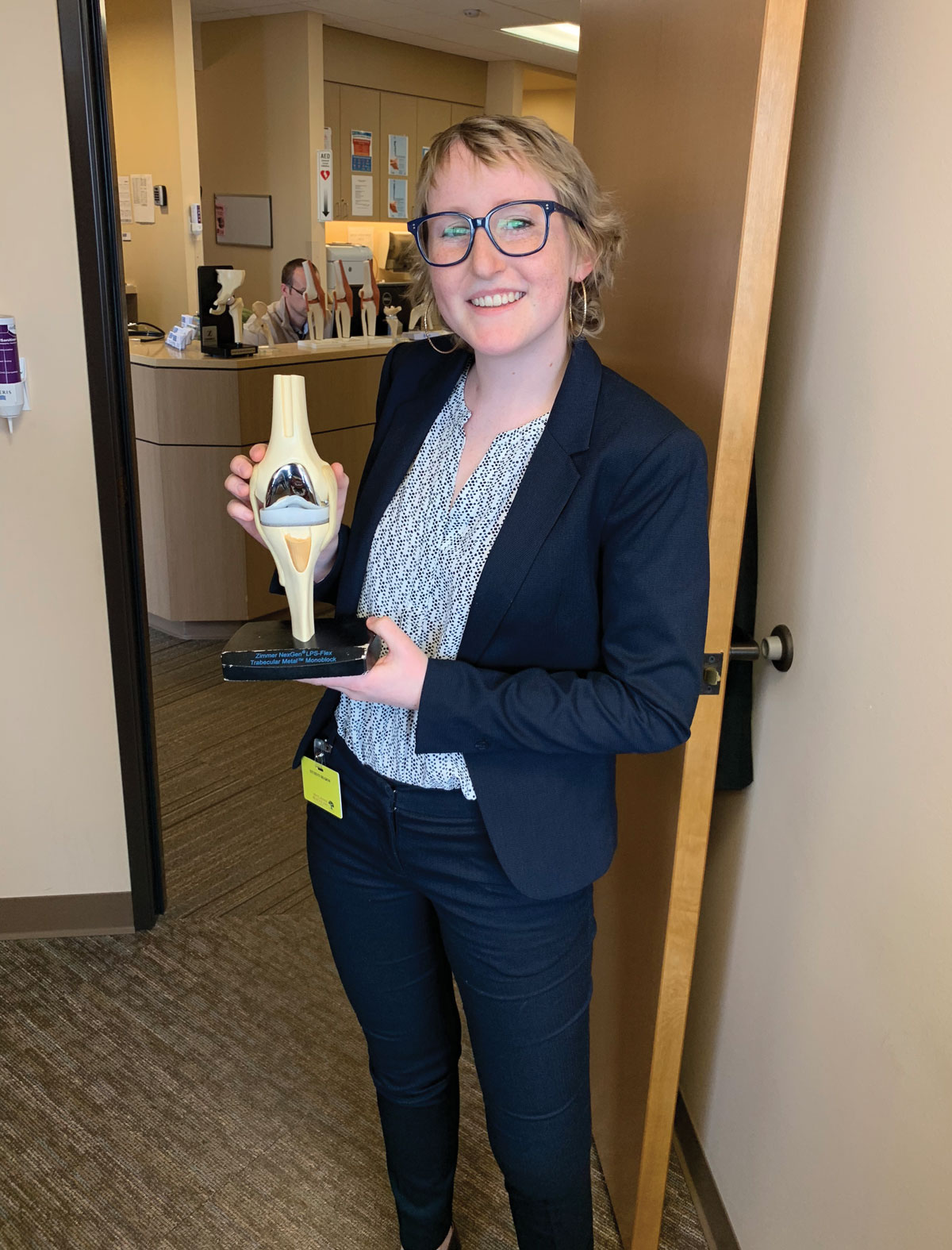 Johnston holds a model of a standard knee replacement while participating in a job shadow at an orthopedics office in Hood River, Oregon. Photo courtesy of Rebecca Johnston ’22

“During my whole treatment, I ignored the realness of it and that my life is in jeopardy. I thought, ‘Let’s just take each day at a time, each chemo treatment at a time, and just do it,’” she said.

Her defensive strategy proved successful. She returned to Whitman in the fall of 2018. She rejoined her volleyball teammates in a new capacity: helping out on the court during practices, keeping stats and giving encouragement during games.

“She shows a type of competitiveness that is not necessarily evident in play on court, but she’s competing with real-life situations,” Helm said.

“As a result of my surgery, I’ll probably never run again — the muscles and joints are much different now,” Johnston said. “I can’t bend my knee, which puts limitations on things. I have to remind my friends to walk slower when I’m in groups with them.”

Working within her new physical limitations, Johnston has channeled her passion for competition by joining the U.S. Paralympic Sitting Volleyball team.

“When you’re in an environment with other people who have gone through challenges, whether they’re amputees or gone through things like I have, it’s helped me find an avenue where I can still be an athlete, even though I can’t do the things I used to be able to do,” she said.

The experience also solidified her passion for studying medicine.

“Even before the cancer I wanted to go to medical school and be a doctor. I enjoy science. Being able to use my knowledge to help people out is the coolest thing to me,” she said.

Johnston is leaning toward declaring biology as her major with a chemistry minor. Orthopedics and anesthesiology are the two fields she is most interested in.

“All the anesthesiologists I’ve met are super smart and comforting, and they just really know how to make you feel comfortable and safe,” she said. “I’ve been in a hospital and it sucks, so hopefully I can make that better for my patients someday.”

Until then, Johnston is just happy to be back at Whitman.

“My mom always said you have to love school first above volleyball, in case you get hurt,” she said. “Whitman as a school has been so supportive. There are so many connections and resources here. It’s setting me up for my career.”