As a teenager in Coronado, California, McGuire ’77 adored her years at Convent of the Sacred Heart El Cajon. But when the national Sacred Heart order decided to close some schools, El Cajon was the smallest, newest and most in debt.

For McGuire, this loss sparked a lifelong dedication to support the schools she cares about.

Her story with Whitman College began when a family friend told McGuire’s mother how much he enjoyed his experience and studies at Whitman. “My mom came home and said, ‘When you meet somebody who loves their school, you should pay attention,’” McGuire says.

After one visit to Walla Walla, McGuire knew Whitman was the only place she’d apply.

At 16 years old, McGuire became a Whittie. Her parents told her that college was her opportunity to learn as much as she could about a range of ideas. She expected to study pre-med, since both her parents were physicians, but discovered she was graceless in the chemistry lab. 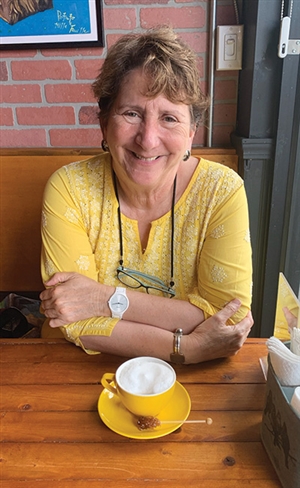 “I melted a thermometer, my solutions looked like witch’s brew and I spilled the unknown in the Mettler balance, ruining a $5,000 piece of equipment,” she says, laughing at the memory. “The lab assistant just said, ‘Well, nobody’s ever done that before.’”

McGuire decided majoring in a language was the most practical approach to her liberal arts education. She loved her German professors and knew she could take every German class and still have time for a broad-spectrum of other classes.

Her professor in Modern German History, Fredric Breit, encouraged her to read “All Quiet on the Western Front” in German. She was struck by the book’s descriptions of trench warfare and Breit’s explanations of everyday people’s struggles during World War I.

“It was personal—my grandparents were from Germany; my father was born in Berlin, but never talked about that period of their lives,” she says. “It was the first time anyone had so vividly described things like the inflation that preceded the war.”

In Religions of the World with George Ball, she wanted to convert to each faith they studied. Anthropology classes with George Castile kindled her interest in Indigenous people of the Americas.

“By my senior year, I would be running from class to class saying, ‘You will never believe what I just learned,’” McGuire says.

Leading with Her Heart and Smarts

McGuire’s Whitman education and endless curiosity led to multiple paths. Since graduation, she has been a retail manager, a financial planner and registered investment advisor, a trust officer, a planned giving officer, a development officer, and an entrepreneur with a gourmet meal delivery service.

“My hope for Whitman is that it continues to shine as an example of what is possible with a liberal arts education,”—Wendy McGuire ’77

She is currently the co-president of an outsourced accounting business based in Mumbai, India.

But in 1978, shortly after graduating, McGuire made a dramatic career decision that underscored the importance of her education and influenced her future endeavors.

Like many young people during the Vietnam War, McGuire had protested the war—and she recalls her father actually encouraging her to consider joining the military.

“He said, ‘I understand your feelings about this current conflict, but I also know you are not a pacifist. If something you love was threatened, you’d fight for it, right? Sometimes people who are educated, understand history and literature, have common sense and are passionate about change can be more effective inside the system,’” McGuire recalls.

She took his advice to heart. Knowing that at that time women were not allowed to fly in the Air Force and not allowed on ships in the Navy, she decided to look at the Army.

She was accepted into Officer Candidate School and became its first female honor graduate. The Army had opened artillery combat positions to women in 1978, and McGuire was among the first four women commissioned in air defense artillery. She completed the basic officer’s course and was assigned to a missile site overseas.

After active duty, McGuire joined the Army Reserve. During her 31-year career, she was deployed several times, commanded units up to the brigade level and retired as a colonel in 2009. “I ended up achieving what I wanted to achieve, which was bringing some common sense to the system,” she says. “My father was very proud.”

While serving as the planned giving officer for a private school in California, she met one of the nuns who had been on the committee that closed El Cajon.

“I said, ‘Well, I have to tell you, you make my job so easy,’” McGuire says. “People tend to say, ‘I hate asking for money,’ but all I need to say is, ‘You know … nobody ever asks me for money from my old school, because it closed due to a budget shortfall.’ When people hear that, they realize that if they don’t donate to their school, it can close forever.”

During her military years and time as a single mom, McGuire always gave what she could to Whitman. As her situation improved, she was able to give a bit more.

In 2022, as she began slowing down in her professional life, her thoughts returned to Whitman. She wanted to build a financial base for her retirement while supporting the institution that had challenged and educated her.

She chose a gift of Apple stock through a charitable remainder unitrust—which reduces capital gains and provides regular income, tax benefits and allows her to support Whitman at the same time.

“My hope for Whitman is that it continues to shine as an example of what is possible with a liberal arts education,” she says. “It’s a jewel of that type of institution and I’m interested in supporting the kind of education that helped me accomplish the things I’ve done in life, as well as gave me the many lifelong friendships I enjoy to this day.”

More than 680 alumni, parents and friends of the college are currently members of our Dorsey Baker Legacy Society, supporting Whitman’s long tradition of legacy giving.

Have questions about planned giving? Whitman’s Office of Gift Planning is here to help. You can start the conversation by contacting Jamie Kennedy ’96 at 509-527-5989 and kennedjj@whitman.