Two Whitman College students have been awarded $10,000 each in grants through Projects for Peace, a competitive program encouraging undergraduate students studying at partner colleges to design projects revolving around peace, reconciliation, and/or conflict resolution on a global scale.

Joy Nina Nampaso, a junior, and Stacy Mwangi, a sophomore, will spend their summer implementing their separate initiatives on issues prevalent in their home country of Kenya.

Nampaso’s project will be centered around developing an awareness campaign to educate the local community about the harmful effects of female genital mutilation (FGM) and to work toward eliminating its practice within the Maasai tribe.

Mwangi’s project focuses on providing reading resources to students in underfunded schools, setting up mobile libraries and offering literacy support. It is something she became passionate about during one of her fellowships.

Whitman is especially proud to have both projects selected this year. Especially since it is only the second time in the past 15 years that the college’s first and second nominees were chosen to receive the grant.

“Whitman's success rate, especially when two applicants are selected, is truly a testament to the caliber of Whitman students and the civic-minded leadership qualities they possess,” says Jess Hernandez, director of fellowships and grants at Whitman College. 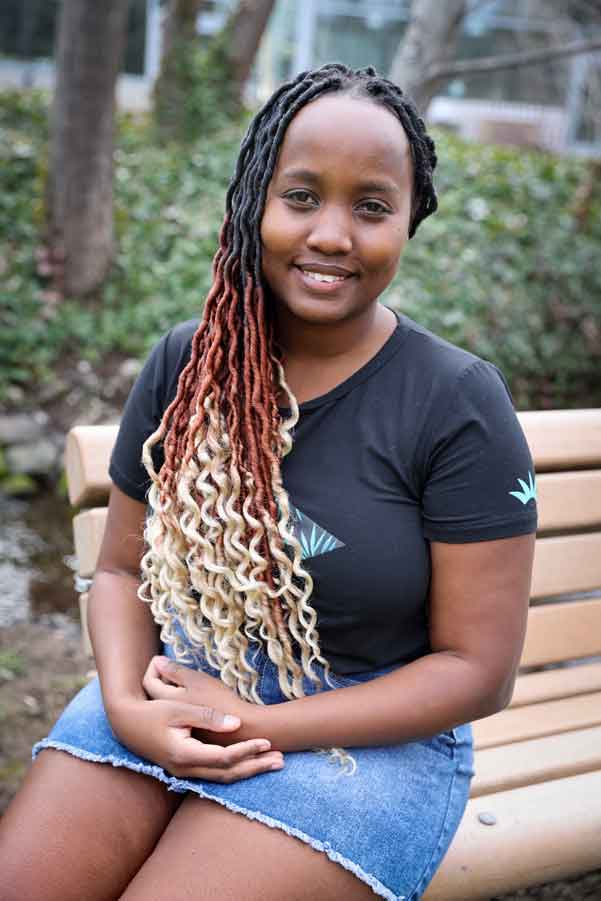 Nampaso’s project, Linda Dada–meaning “Protect the Girl” in Swahili–is about raising awareness of the harmful effects of the cultural practice of female genital mutilation in the Masaai tribe. Although Kenya criminalized the ritual intended to mark a girl’s transition to womanhood—and reduce libido—in 2011, the cultural tradition is still practiced.

The biochemistry, biophysics, and molecular biology major aims to educate the Masaai community on the physical and emotional effects of FGM through awareness workshops, village visits and a soccer tournament where community members can enjoy the game while being educated on the cause. Nampaso will be working with a tribe elder, a local maternity doctor and the non-profit organization: Maa Association for Ignorance and Poverty Alleviation.

For Nampaso, Linda Dada isn’t just a summer project–it’s a childhood dream. Nampaso thought she would be well into her thirties before she put her dreams into reality but the Project for Peace grant has given her the opportunity to make a difference in the world before she even graduates college.

“The Project for Peace grant is such a great resource for me to finally actualize it. It’s a chance for me to do something I’ve always wanted to do for the girls in my community,” Nampaso says through tears. “A lot of women feel very forgotten in their pain and in their struggles like no one is listening or understands. So it is really really important.”

Nampaso also plans on continuing to address the needs of women long after the summer project is over. She aims to expand the program in many ways from providing hair care support and teaching workshops to educational scholarship opportunities for young women in her community in hopes that women will recognize their voice and self-worth.

“This will allow them to finally focus on their goals and dreams without worrying about all these extra things that they are worrying about because they are women,” says Nampaso. “It will humanize them and make them feel heard, appreciated, and feel their self-worth. It will make it easier for them to self-actualize and not have their life be predetermined for them.” Mwangi’s project is titled Twaleta Mwasoma–meaning “We bring a book, you read” in Kiswahili. She plans to help alternative primary school students by providing a stepping stone for students to build a brighter future.

Literacy is an issue Mwangi first became passionate about during a fellowship in her gap year before attending Whitman College. As a fellow at PACEMaker International, a non-governmental organization working to improve education in Kenya, she learned the major difference between private, public and alternative schools: funding. She created makeshift reading materials for public school students using things such as newspaper clippings.

The experience stuck with Mwangi, inspiring her to create the Twaleta Mwasoma Literacy Project. However, she chose to focus on students with a greater need–students attending alternative schools because they don’t receive any funding from the government. She says these students are a few reading levels behind and the gap only widens as they get older.

Through the Project for Peace award, Mwangi intends to utilize the allocated funds to provide real reading resources including journals and published books with colored pictures and graphics. These books would be used to teach students in Kenya how to read books in both languages. Mwangi in collaboration with PACEMaker International will build mobile libraries and offer reading support with trained staff giving proper Kiswahili and English reading lessons.

“What I am trying to do with literacy is give people a level ground for them to succeed,” says Mwangi.