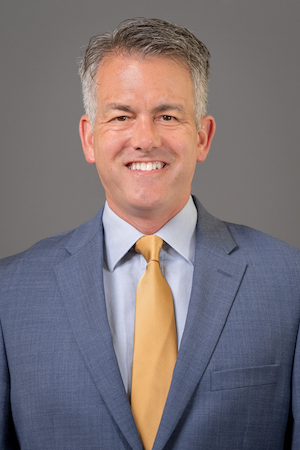 On Oct. 7, Whitman College President Kathleen Murray announced the appointment of Steve Setchell as the college's new vice president for Development and Alumni Relations. Setchell succeeds John Bogley '85 who served the college for more than 25 years.

Currently the vice president for development and alumni engagement at DePauw University in Indiana, Setchell will begin at Whitman College on Nov. 1. He will serve on the President's Cabinet and will be responsible for oversight of all fundraising and alumni engagement efforts to strengthen and expand the college's support base. He will manage a team of 33 employees who support the strategic advancement efforts of the college.

"Steve impressed me with his history of success as a fundraiser and his nuanced understanding of the fundraising process," said President Kathleen Murray. "But more than that, his ability to build relationships and his genuine interest in Whitman and the broader Walla Walla community set him apart from other candidates. I look forward to the innovative strategies he will bring to Whitman in the coming years and to our work together."

Setchell has held various positions at DePauw University over the past 23 years, serving as the vice president for the past two years. During that time he led the university through the final 19 months of a development campaign that totaled $383 million in gifts and new commitments. Prior to 2017, Setchell's roles included positions in annual giving, major gifts, corporate and foundation relations, campaign management, and alumni engagement. Prior to 2002 he worked in admissions at DePauw and Ohio Wesleyan University.

"During my visit to Whitman, I was impressed by an exceptional academic tradition of talented faculty and students, the thoughtful and visionary leadership of President Murray and the Board of Trustees, strong cabinet and development and alumni relations teams, loyal alumni and friends, a vital commitment to student access and equity, decades of prudent financial management, and a beautiful campus and vibrant downtown at the doorstep to the Blue Mountains," said Setchell.

Setchell joins Whitman as the college continues to build on its national reputation for academic excellence with an endowment that exceeds $500 million, fiercely loyal alumni, exceptional students and accomplished faculty and staff. The college is in the implementation phase of a strategic plan that has been refined over the past three years and is well-positioned for its next large fundraising effort.

Setchell's hire comes on the heels of a months-long, nationwide search. The search committee vetted and interviewed a diverse group of highly-qualified candidates. Overall, they were looking for a candidate who was collaborative, forward-thinking and goal-oriented, with exceptionally strong communication and relationship-building skills, a demonstrated commitment to diversity, equity and inclusion, and creativity.

Setchell is known for his commitment not only to higher education, but the community in which he lives. He has served on the board of directors of an Indiana shelter for women and families, the Putnam County Community Foundation and the Greencastle Chamber of Commerce and served on the City of Greencastle's Commission on Sustainability.

Setchell received his master of public affairs from Indiana University and his undergraduate degree from DePauw University.

Setchell will move to Walla Walla with his wife Cara who also spent more than 20 years at DePauw in multiple roles including director of residence life, dean of students, first-year class dean, and, most recently, dean of experiential learning and executive director of the Hubbard Center for Student Engagement.