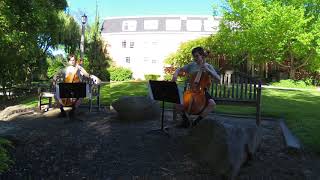 He learned to play the five-string Baroque cello, an instrument which Whitman College purchased last year. He also figured out how to splice together video so he could create a unique self-duet performance for his final project of the semester.

Dubay is a music (performance) and physics-astronomy double major. Originally from Portland, Oregon, the rising senior is studying cello under studio music instructor Sally Singer Tuttle. Tuttle assigned Dubay a sonata by Italian composer Antonio Vivaldi, and the accompanying harmony part. When classes moved online in March due to the COVID-19 pandemic, Dubay was undaunted by the absence of a second performer, and worked on both the solo and accompaniment parts of the sonata.

“Since I couldn't make music with anyone else at the time, I decided to accompany myself,” Dubay said.

For his final submission, Dubay recorded separate tracks of the melody and harmony parts and put them together, stitching the video together to give the appearance of two identical people playing as a duet near the creek outside the Hall of Music. He even managed a few sideways communicating glances at his chamber music “partner” during the video.

“Getting the parts synchronized was tricky — I ended up wearing an earbud so I could listen to one part while I recorded the other,” Dubay said. “I have a lot of experience with audio mixing, but almost none with video, so it was a new experience for me. Fortunately, it turns out that split-screen is easy enough to do with free software.”