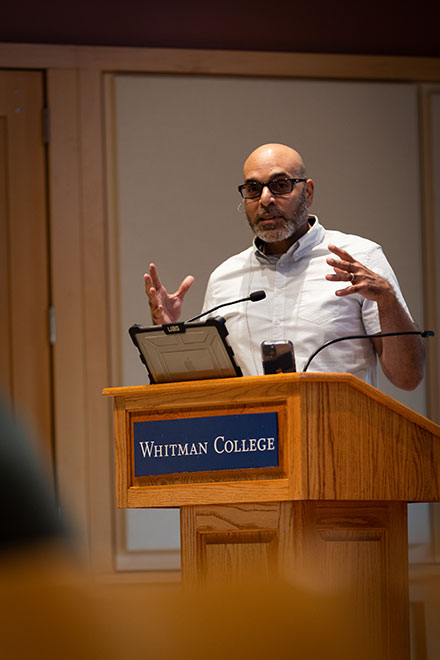 Scholars Dr. Jared Ball and Dr. A.D. Carson visited Whitman College on Sept. 22 to share their work and expertise in The Scholarship of Hip Hop.

The event was the first of the Fall Semester’s Third Space Speaker Series, originally launched in the 2021-2022 academic year. The series centers around the concept of a third space emerging from the work of scholars who saw a need to create new spaces centering on those often marginalized.

Thanks to support from the Johnston-Fix Foundation, Whitman will continue to bring in scholars, artists, writers and thought leaders whose work helps advance inclusive excellence and where values of cultural humility, cultural wealth and cultural pluralism are embraced. Learn more about what this means.

Ball is a professor of communication studies in the multiplatform production department at Morgan State University. Ball also authored “I Mix What I Like: A Mixtape Manifesto” (2011) as well as “The Myth and Propaganda of Black Buying Power” (2020).

Carson is an assistant professor of hip hop and the global south at the University of Virginia. His Ph.D. dissertation at Clemson University, “Owning My Masters: The Rhetorics of Rhymes and Revolutions,” was a 34-track rap album that challenged and expanded traditional notions of scholarship.

Read more about the speakers.

Each scholar presented their experiences and expertise in hip hop scholarship and an audience Q&A followed. Ball and Carson discussed themes of colonization, capitalism, social justice and how society uses hip hop to depict a violent narrative against the Black community. 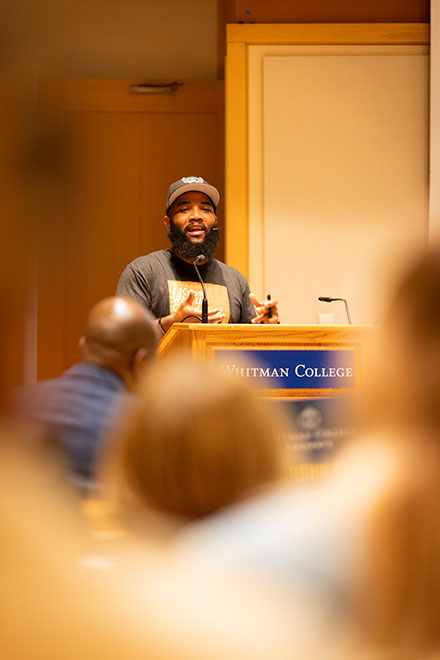 Students in the audience were encouraged to critique and ask questions. Some asked what could be done to reclaim and decolonize hip hop. Others wondered how they could use their scholarly achievements to advance such efforts, rather than capitalizing on them.

Ball urged them to look to history and note how Black communities have historically been colonized, including in their self-expression. He pointed to people in power who have filtered lyrics and messaging to secure record deals, sponsorships and fame.

“You cannot be rich, radical and famous simultaneously. There is zero exception to that rule. If someone is popular, look more carefully at the message,” said Ball. “Mainstream hip hop is diluted by the machinery of society. When you practice capitalism, you’re practicing domestic colonialism.”

Carson says as a rapper, he can take the meaning of a word and change the way people perceive it, giving it power. His experience showed him that he wasn’t taken seriously until he earned the academic credentials that made him an expert in society’s eyes.

“I got some pretty good advice from a mentor who said, ‘well, you know if you are in that position—referring to being an expert—then you can talk about how it’s absurd’.”

The next event in the Third Space Speaker Series will be on Oct. 13. Dr. Lissa Ramirez-Stapleton,  Dr. Subini Ancy Annamma, and Alex Locust will share their expertise on Critical Disability Studies and disability justice with the Whitman community. Learn more.