Sociologist Caity Collins ’08 Has a Message for Moms: It’s Not Your Fault

Caitlyn Collins ’08 has spent her career studying families, starting during her time at Whitman College. The sociology major began with a research project with Professor Michelle Janning, looking at the way that divorce was represented in children’s rooms. 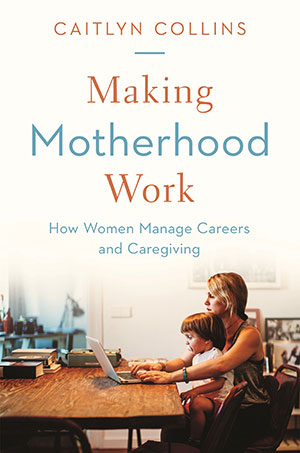 And in this particular moment, Collins is worried about mothers in the United States as the COVID-19 pandemic increases the inequities faced by moms — especially working moms.

“One of the main findings in my book is that American mothers tend to blame themselves for the work-family conflict in their lives, in a way that European mothers don’t,” Collins said. Where other countries have strong social welfare systems and an “all-in” approach to caring for children, the U.S. views childcare as a private, personal responsibility — and in particular, a mother’s responsibility.

“It continues to be women who bear the brunt of the responsibility for the domestic sphere. They remain responsible for the health care and childcare,” she said. And during the pandemic, many women found themselves at home doing double-duty as school, workplace and daycare.

“I am afraid that moms will blame themselves for the stress, the struggles, rather than understanding that this is a massive, governmental, structural failing,” she said.

For her book, Collins studied families in Sweden, German, Italy and the U.S. over five years. She interviewed 135 middle-class, primarily white, heterosexual, working mothers. Each country represents a different welfare structure, and provides varying amounts of support for families, from extended paid parental leave to daycare support to a legally protected right to work a reduced schedule when you have children younger than 8.

“Moms in the U.S. are pretty stressed out. It feels like a universal problem,” Collins said. “In European countries, there is an expectation to a greater degree that men and employers and the government should play a role in supporting women’s work and family lives,” she said.

During the pandemic, she said mothers are reducing their work hours four to five times as much as fathers.

“That adds up to pretty serious consequences in women’s labor force participation,” she said. “These pandemic times are placing a spotlight on the difficulties of American families in a new way. We’re asking parents to do the impossible right now.”

The worst-case scenario for Collins is the pandemic forces more women to drop out of the workforce to care for their children.

Hope for the Future

Collins hopes that the pandemic can be a launching pad to increased political participation by people who want to see U.S. family policies catch up to the rest of the industrialized world. Some workplaces are already enacting more family-friendly policies as recruitment and retention techniques. That’s a start, she said.

“Everybody has stuff outside of paid work that we all need to attend to. We’ve been carrying on as if work is the only thing going on in our lives because that’s what expected on the job,” she said.

America’s history of individualism and independence makes an uphill battle for families pushing for gender-equality at home and work.

“Going from the idea that families are a private, personal responsibility to the idea that it’s a public interest to support families requires a massive shift in how we understand our obligations to one another. It gets to the core of what it means to be American,” Collins said. “Liberty and individual freedom are tied very deeply to the lack of a robust, public social safety net. We think it’s our job to care for our families all by ourselves.”

Collins’ next research efforts complement the work of her book: She plans to study the U.S. market for childcare, as well as households and families who identify themselves as “feminist.”

“We know that marriage as an institution is deeply patriarchal,” Collins said. “What does it mean to have a feminist wedding, a feminist marriage, a feminist household with children in it?”

The question is inspired by research she did in Sweden, where she saw dads everywhere with their children.

“I would say to dads, ‘I think it’s really cool that men feel this duty to take care of their kids,’ and men would look at me funny and say, ‘This is not my duty. It’s my right to spend time with my child,’” she said. “That is such a transformative, revolutionary way to shift our mindset about caregiving.”

While the U.S. is seeing an increase of fathers staying home with their children, the majority of primary caregivers are still women.

For now, Collins wants to see working moms in America begin to release their guilt, and realize the issue isn’t personal, it’s structural.

“I want moms to stop blaming themselves for the daily struggles they face in navigating work and family life,” she said. “I talked to so many moms in the U.S. who broke down sobbing in our interviews because they felt so crushingly guilty. I think recognizing that it is not women’s fault helps women recognize that it’s not their job to fix. That’s very hard for mothers to hear.

“When I looked them in their eyes and said, ‘This is not your fault,’ they would cry. Women really do feel that they are all on their own.”