Cambridge University cognitive neuroscientist Edwin Dalmaijer gets plenty of inquiries about PyGaze, the open-source eye-tracking software he developed, but admits the email he got from Whitman’s Thomas Armstrong, associate professor of psychology, immediately piqued his interest.

“Tom [Armstrong] first contacted me some years ago, to ask for help with eye-tracking,” Dalmaijer said. “While this is not unusual, his email subject line ‘Paying participants to look at poop’ was uniquely intriguing.”

Armstrong has been researching the connection between anxiety disorders and disgust responses for many years, and as part of that work he’s studied people’s tendency to look away from things that disgust them. Like poop.

“Inspired by Tom’s contagious enthusiasm, I quickly learned that disgust is a fascinating topic, and a productive collaboration was born,” Dalmaijer says.

The goal of Armstrong’s research is to better understand how disgust resists exposure therapy, a treatment designed to help people with anxiety disorders confront their fears by repeated exposure to the perceived threat. There are many theories as to why exposure therapy works, but many psychologists believe it’s the result of habituation—the idea that people can become accustomed to stimuli so it won’t bother them as much or even at all.

It’s a method that’s proven effective with anxiety disorders that are rooted in fear, such as acrophobia (the fear of heights), but exposure therapy doesn’t work as quickly with disgust-based anxieties like blood-injection-injury phobia.

Armstrong wants to know why.

In the “Forever Yuck” study, participants were exposed to disgust-provoking stimuli—more specifically, they were shown pictures of poop—and the team used Dalmaijer’s PyGaze technology to track their eye movements. Lee, Leiter and Brown, who assisted in creating the study design, also worked with Armstrong to conduct the testing and collect the data in the PEEP (Palouse Emotion and Experimental Psychopathology) Laboratory in Whitman’s Maxey Hall. 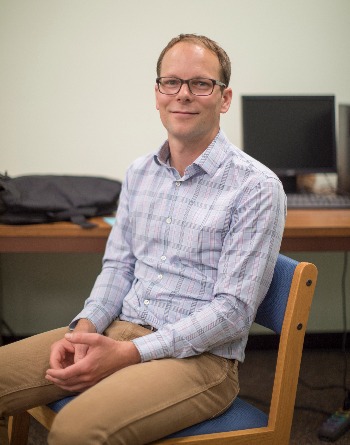 Participants were shown disgusting images 48 times for 12 seconds at a time and instructed to look at the images as long as they pleased. Guiding psychological theory posits that people will habituate to unpleasant stimuli, enabling them to become more tolerant of it with sustained exposure—but the results of this experiment contradicted the team’s expectations. They found that the more they showed the participants disgusting images, the more they looked away from them.

To encourage habituation to the disgusting images, Lee and Armstrong decided to offer participants a small financial incentive for looking at them. With Dalmaijer’s help, they reprogrammed the experiment to play a jingle alerting participants they had earned 50 cents for looking at the poop for a certain amount of time. The incentive changed participants’ responses: Almost 100 percent of the time, they looked at the poop for longer when the computer was notifying them that they were earning money. When the incentive was taken away, people went back to averting their eyes.

The continued avoidance of the stimuli prevents habituation, Armstrong explains. “If you become habituated to a loud sound and I keep playing the loud sound, it’s going to stop bothering you. You’ll stop tensing up,” he says. “But, say you put your fingers in your ears every time the sound comes on, then you’re not showing habituation because you’re guarding yourself from the sensory input.”

Could this be the reason exposure therapy isn’t as effective with disgust-based anxieties?

Addressing Disgust in the Real World

Disgust is often overlooked in psychological research. Although it’s a basic emotion, there is considerably less examination into its mechanisms than there is in happiness, fear, anger and other emotions.

In this case, Armstrong understands why: “It’s gross. It’s taboo.”

“It wasn’t until the ’80s that anyone did anything in the lab with disgust. Look at my study, for example: I’m showing people images of disgusting poop, and the attitude was ‘What are you doing?’ It’s a forgotten emotion because it’s taboo and icky.”

He believes that disgust is an emotion deserving of much more study—and he’s convinced a fellow researcher, at one of the most prestigious academic institutions in the world, of that.

Since collaborating with Armstrong on “Forever Yuck,” Cambridge’s Dalmaijer has crossed over to disgust research. The pair aims to take on even more ambitious projects. They're currently working with Whitman’s Computer Science (CS) seniors to build open-source software for psychologists, including the toolbox that makes inexpensive eye-tracking for disgust research possible.

“Forever Yuck” also caught the eye of one of Dalmaijer’s Cambridge peers, neuroscientist Camilla Nord, who was studying the connection between disgust and stomach rhythms—how seeing something disgusting can make people sick to their stomachs. Nord used the same research paradigm developed at Whitman—tracking study participants’ eye movements when shown disgusting images—to conduct an experiment to see if taking a common anti-nausea medication, domperidone, would make them more able to tolerate the unpleasant stimuli.

If you’re wondering, increased tolerance to pictures of poop isn’t the end goal of disgust research.

Armstrong hopes garnering a more thorough understanding of disgust could help improve treatments of psychological disorders and even alleviate societal issues such as racism, homophobia, anti-Semitism, xenophobia and other intolerances that stem from feelings of disgust.

Exploring ‘Race, Violence, and Health’ With the Artwork of Favianna Rodriguez