Hooping it up: Men’s basketball ranked No. 1, women No. 6 in preseason poll 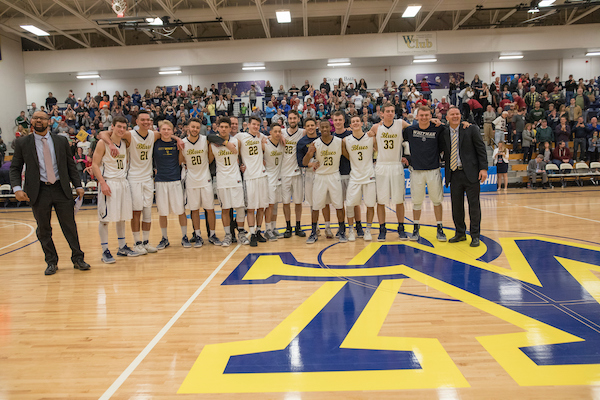 "Our program's successes have always been, and will continue to be, directly related to the relationships we have with each other," said Head Men's Basketball Coach Eric Bridgeland, upon learning that both the men's and women's basketball teams earned top 10 spots in D3hoops.com's NCAA Division III preseason rankings.

After last season's successful performances, the Blues men ranked No. 1 this preseason—the first time that a Whitman varsity team has kicked off the season at the top of the polls—while the women's team came in sixth.

Last season, the men bowed out in the Final Four as the first men's Northwest Conference team ever to advance that far. Prior to that game, they won 31 consecutive games—a streak unmatched across all three divisions. Last year, the experts ranked the team No. 9 in the preseason poll.

Sociology major and wing Cedric Jacobs-Jones '19, who returns from last season's lineup, said: "Within the team, I have seen a committed effort to prepare and practice like we are the best team and have the mindset that no one can beat us," adding that Bridgeland "brings that confidence and belief that allows us to play to our full potential."

This year, the focus is on challenging the team while following an "RP3" approach: "We run, get to the paint, pressure and are about possessions," Bridgeland explained. 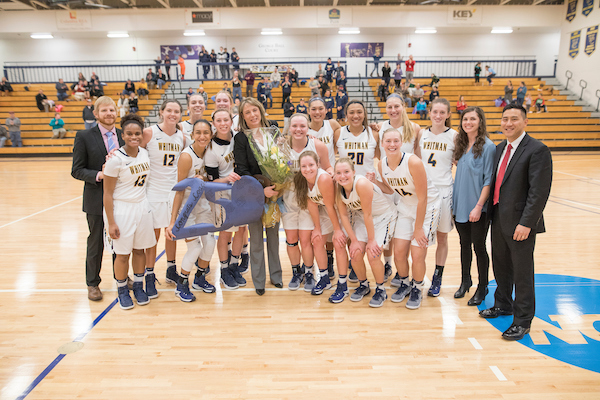 Despite not being seeded last preseason, the women's team advanced to the Elite 8 and compiled a 26–5 record. They posted a winning record for each of the last seven seasons and made it to the NCAA championship game in 2013-14.

"Every season is different, because the make-up of players, coaches, opponents is different," said Michelle Ferenz, head women's basketball coach. This year, the team will adjust to its new challenges, but, she said, the things that made the team successful last year—such as the strong bonds between players—may help them succeed again.

"Coach brings knowledge to the court during practices and games," Poe said. "We've been practicing really hard preparing for the season."

The Blues women take on Eastern Oregon University in their season opener in La Grande, Oregon, on Wednesday at 5 p.m. The men's team opens the 2017 Best Western Tip-Off Challenge against Waynesburg University (Pennsylvania) at 7 p.m. this Friday in the Sherwood Athletics Center.