Riley Clubb '09 worked on a scuba diving boat in Australia, sold ski boots in Aspen and tried his hand at winemaking before enrolling in the prestigious Sloan School of Management at MIT. This summer, the Walla Walla native returned home to undertake another ambitious venture: the first-ever virtual reality theatre, which drew hundreds of people to his 12-seat pop-up theatre on Main Street over the course of its two-month run.

"I've pretty much always been attracted to business and entrepreneurship, having grown up in a family of entrepreneurs and business managers," he said.

Clubb's mother, trustee Megan Ferguson Clubb '79, is the president and CEO of Baker Boyer Bank, which was established in 1869 by her great-great-grandfather. The Clubb family also owns and operates L'Ecole Winery in nearby Lowden, Washington. Riley Clubb is a sixth generation Whitman graduate.

"I realized during all of this that the thing I'm most proud of is the fact that this theatre launched in Walla Walla," he said. "The response has been great. I went into this summer with a complete 'experiment' mindset, and the business model changed significantly thanks to feedback from customers."

So what exactly is virtual reality, and what made Clubb's project so unique? For one thing, Maskerade Walla Walla remains the only theatre of its kind to offer a shared viewing environment—usually, VR technology is experienced solo. Visitors to the upstairs gallery space were seated in swivel chairs and equipped with headsets and headphones, which allowed them to enter a computer-generated 3D simulation while still interacting verbally with one another in "real reality."

"The headsets had a space in the back that made it easier to hear fellow audience members," said Assistant Professor of Anthropology Rachel George, who went to a showing. "It made a room full of people having synchronized but essentially individual immersive experiences into a social space, because I was able to hear people laugh, gasp or scream." According to Clubb, that's exactly what sets his interpretation of virtual reality apart.

"Maskerade is the first VR theatre in the world by virtue of the fact that we actually have an audience greater than one," he explained.

Without that crucial group component, "you spend all this money and time trying to experience something in virtual reality, but then you're all alone on your couch and there's no one else around to talk to about it."

Clubb, who majored in rhetoric and film studies at Whitman, first learned about VR from a business school friend who runs a virtual reality content studio in Los Angeles. His idea for Maskerade came about during a class at MIT in which he and a few fellow MBA students developed the business plan for a virtual reality theatre company.

"Two-dimensional screens simply do not do justice to the actual experience of being in front of a stage," he said. "Virtual reality, however, does. I think Broadway has at least as much if not more to gain from VR than Hollywood, but only time will tell."

Another reason why virtual reality might play a role in the future of live theatre? Supply and demand.

"The performing arts is one of the only genres of entertainment that has yet to figure out how to distribute its experience beyond local markets," Clubb said. "Unfortunately, this has made it extremely difficult for theatres to survive. At the same time, we have shows like Hamilton that totally dominant the pop zeitgeist and tickets sell for thousands of dollars. So theatre is not underappreciated, it's under-distributed. And, unsurprisingly, solving the distribution puzzle is a technology problem more than anything else."

When Maskerade's doors opened in early July, Clubb modeled its operations after a movie theatre, with a schedule of show times that any customer could attend at random. Soon, however, he changed his approach.

"People really seem to appreciate the presence and interaction with other audience members more when they know those people," he said. "So I moved my business model to something more like one of those karaoke bars where you reserve a room."

"My favorite moments probably all came from that one," Clubb said. "Lots of people would move their chairs to be closer to their friends and family. They would often reach out and hold hands. Sometimes they would even say things like, 'you watch the stairs, I'll watch the hall!' It's actually very entertaining to watch people experience a haunted house in VR." 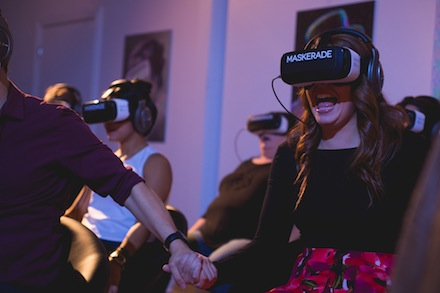 Maskerade's main attraction was Black Rock, a virtual reality film produced on location at last year's Burning Man Festival that seeks to transport viewers to the Nevada desert where it takes place.

"That was a strange little documentary," said Peter Shultz, another attendee. "Almost none of the subjects interacted with the camera, so it was a bit like being a ghost."

As a prelude, audiences also watched the first movie ever made, a single shot of a moving train that terrified viewers in 1896, who, mistaking the grainy footage for reality, famously fled the theatre. Yet just as those crowds soon caught on to silent films, Clubb doesn't foresee the allure of virtual reality slowing down any time soon.

"I think Pokémon on Broadway is not very far off, and could easily be distributed across the world to fans everywhere."

With one more year at MIT left to go, Clubb is keeping an open mind about what his own future may hold. But regardless of his next step, he feels prepared. Clubb credits both Whitman and MIT with providing him with the skills to succeed in such a wide array of professional pursuits.

"The 'case' method you find at business school is extremely similar to how classes work at Whitman," he said. "Lots of open discussion, student engagement, small teams. It's extremely useful to be able to approach problems from as many different angles as possible, and liberal arts are a terrific way to sharpen that skill."