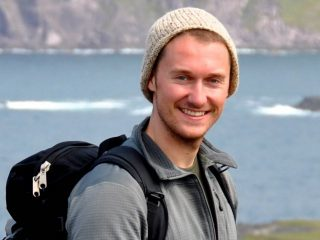 Matt Schissler '07, a native of Bellingham, Washington, who majored in politics and rhetoric and film studies at Whitman and now studies cultural anthropology at the University of Michigan, has received the coveted National Science Foundation (NSF) Graduate Research Fellowship.

"When I heard that I'd received the NSF fellowship I was honored and excited," Schissler said. "This will enable me to really focus on my disciplinary training."

Schissler is one of 2,000 recipients from around 17,000 applicants. Of those selected, only 16 are cultural anthropologists. The award comes with three years of support from the foundation, a $34,000 annual stipend, $12,000 for educational costs and an array of international research and professional development opportunities.

According to NSF, the fellowship's purpose is "to help ensure the vitality and diversity of the scientific and engineering workforce in the United States." The program recognizes outstanding graduate students who are pursuing research-based masters and doctoral degrees in areas within the scope of NSF's mission, including the STEM fields, social sciences and psychology.

Schissler, who also has a degree in international human rights law from Oxford University, is a doctoral student in the University of Michigan's anthropology department. He specializes in the mobilization of religious conflict and telecommunications infrastructure, and has published book chapters, a journal article (forthcoming 2017), and an essay series for an academic blog on subjects such as the strife between majority Buddhists and minority Muslims in Myanmar (also called Burma).

For eight years after graduating from Whitman, Schissler lived and worked in Myanmar and Thailand, supporting local efforts to document human rights violations and prevent religious violence. Last year, he co-founded the Myanmar Media and Society Research Project, a partnership between Oxford University and the Myanmar Information and Communications Technology for Development Organization, based in the country's old capital, Yangon.

"At first I was asking questions and trying to learn as much as possible because I wanted to be better able to work," Schissler said. "But it seemed impossible to do that without also asking about the nature of the work itself. When my Ph.D. is done, I'll still have a lot of questions about Burma, but also about violence, the law, media infrastructures. I'll probably never answer these in any sort of complete sense, but it seems worthwhile to spend a life trying."

In Yangon, Schissler also served as an adviser to a local NGO working to promote peace and support communities impacted by the country's large-scale development projects and natural resource extraction. Earlier, he spent about five years with a news agency and two groups focused on human rights in southeastern Myanmar.

"I ended up working in Myanmar through a kind of confluence of circumstance and conscience," he said. "Eight years passed quickly. So much was happening and it felt so urgent."

When Schissler first set off for Southeast Asia as a young college graduate, he had planned to travel around the region and then spend a few months teaching English in Myanmar. However, peaceful demonstrations inside the country soon gave way to a violent government crackdown, and foreigners were kept out.

"At that point I was in Thailand—so close!—and I thought I'd try and get closer," he said. "I went to Thailand's western border with Burma. At first, I was just teaching English in a primary school. But I was in a small rural town, which turned out to be the epicenter for underground political activities of an indigenous group call the Mon, who live all across southern and eastern Myanmar."

He added, "Suddenly I was meeting these amazing journalists and human rights activists, who were working secretly inside Burma and then getting that information to Thailand from where it could be published."

Schissler credits Whitman politics professors Timothy Kaufman-Osborn, Jeanne Morefield and Aaron Bobrow-Strain with helping him refine his writing skills, as well as his experience on the debate team, led by Jim Hanson, for teaching him how to manage research, think on his feet and speak publicly under pressure.

"There are still moments even now when I'm writing something or preparing for a talk and in the back of my head I can hear their feedback," he said.

"I intend to keep researching, writing and teaching. I owe a massive debt to people who have been patient mentors—I hope I can repay this in university classrooms some day, in Burma and in the U.S."