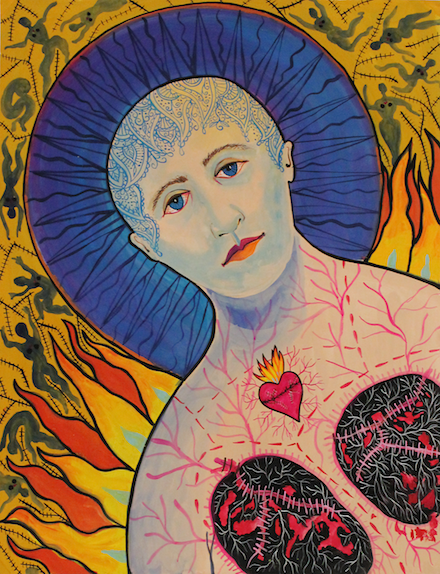 Incoming first years who read Leslie Jamison's The Empathy Exams as their summer read assignment will have more than one opportunity to engage with the book's theme during orientation week.

Local artist Margaret Jamison '74 (no relation) is staging an exhibition through Sept. 16 in Whitman's Stevens Gallery, located in Reid Campus Center. Titled Body of Work: The Process Paintings of Margaret Jamison, the show consists of 17 pieces that trace the timeline of the artist's battle with breast cancer.

The idea for the installation came from Associate Dean of Students Barbara Maxwell, who thought new students would benefit from a visual experience with a strong thematic link to their summer reading assignment. Last year, the Sheehan Gallery brought in Haitian folk art to accompany the novel Brother I'm Dying by Haitian-American author Edwidge Danticat.

In her artist's statement, Jamison describes how her diagnosis and later recovery from cancer informed both the creation of Body of Work and her decision to share it with a wider audience.

"By exposing this small portion of the work I did then, I am exposing myself, not only to the eyes of viewers but also to my own memories, both horrific and redemptive."

Much like the essays that make up The Empathy Exams, Jamison's paintings explore essential questions about how people relate to one another's pain, especially in times of crisis.

"I hope all viewers, whether students or otherwise, will take away from this exhibit a sense of the uniqueness of each person's struggle through life and the necessity of allowing each other to suffer," she said. "We need not suffer in isolation, however, and it is the compassion of others that can provide some relief."

"If this show can touch a chord or two in someone else, either to help articulate visually something felt but not verbally available or to spark a sense of compassion—for oneself or for others—then I am happy to expose this much of my story."

Sheehan Gallery Director Daniel Forbes, who has worked with Jamison on a number of other regional exhibits, echoed her sentiments.

"Margaret's work is a testament to the value of creative process or practice as a means of navigating trauma or other severe circumstances," he said. "The fact that her work is so visually rich and filled with such vivid color offers a profound perspective on the brilliance that can accompany particularly bleak or dark times."

A few pieces in Jamison's collection reference the Mesopotamian goddess Inanna and her descent into the underworld, where she is gradually stripped of everything, turned into a corpse and later revived after confronting demons and her own dark side. Jamison underwent a bi-lateral mastectomy as part of her cancer treatment, in addition to a year of chemotherapy. 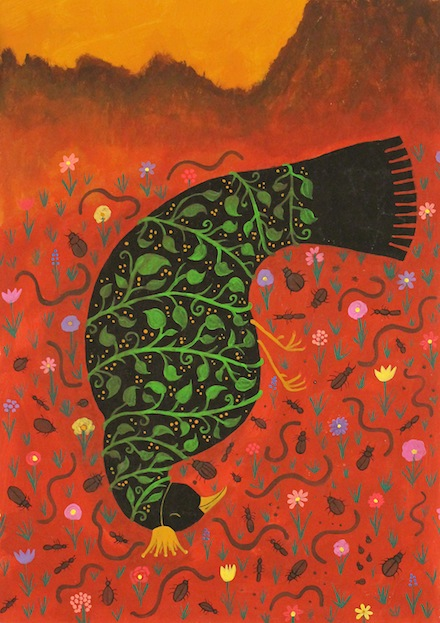 "It was a terrifying and excruciatingly sad experience to have part of my body removed, especially because cancer is essentially the body turning against itself in an invisible and uncontrollable way," she wrote in her artist's statement.

"Some of these paintings followed surgery directly; most of them were created in Berlin as I recovered, and they had nothing to do with making 'art.' They were my direct, visual and visceral response to this increasingly common experience among women, and the making of them allowed me to express my feelings of grief and rage and, finally, come to terms with a new reality."

Jamison utilized a technique known as process painting, which follows a stream-of-consciousness style of production.

Forbes said: "I've long been interested in the psychology related to creative generation, and the idea that writing, music and the visual arts often function both as a means for processing life experiences and as containers for things their authors are unable to hold in other ways."

Prior to her illness, Jamison had already amassed an impressive portfolio spanning more than 30 years, with media including drawing, photography, collage, assemblage and sculpture. She graduated from Whitman with an art degree and earned her master's in art education at Seattle University. In addition to her own art practice, she is an instructor at Walla Walla Community College, where she teaches studio art and art history. Her work has been showcased in galleries across the Pacific Northwest and was featured in the 2010 Eli Lily "Oncology on Canvas" traveling exhibition and accompanying catalogue.

"At a time when students feel very young and vital and impervious, the notion of the frailty of the human body and the willingness to be kind to others in that state is something that's really important to transmit," Forbes said. "I am very grateful, given her original diagnosis, that Margaret is here to share these pieces with us, and that she's had enough distance now from their creation to feel comfortable doing so."