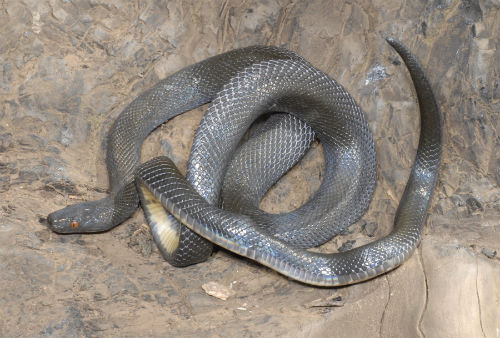 Associate Professor of Biology Kate Jackson has identified a new species of snake from the Democratic Republic of Congo. Jackson's research was recently published in African Journal of Zoology.

The new species, Radford's House Snake (Boaedon radfordi), was discovered in the mountains along the Albertine Rift in central Africa. A 750 mile-long rift valley created by the movement of tectonic plates, the Albertine Rift is flanked by some of the highest peaks on the continent, and also includes a series of notable lakes. It is an area known for its high biodiversity.

To the human eye, the new snake may look like its counterparts in the lowlands of Central Africa, but there are significant differences on a molecular level. These differences are obvious to the snakes themselves and have prevented interbreeding for millions of years.

Jackson and her colleagues Eli Greenbaum, Frank Portillo and Chifundera Kusamba used gene sequencing to detect the different attributes between the Congo Basin snakes and Albertine Rift snakes. They also noted differences in the number of scales under the body and around the eye of the snake. These findings led the team to describe the Albertine Rift lineage as a new species.

Radford's House Snake is an endemic species, meaning that it is only found in this mountainous region of Africa and nowhere else in the world. This makes the new species a conservation concern, because it is not widespread and may be confined to only one or two protected areas.

The recognition of this new species highlights the importance of the Albertine Rift as a region for conservation in continental Africa.

The new species is only the second described in the genus since the 19th century, but Jackson and her colleagues believe many additional species are likely to be recognized in the future.

New discoveries regarding African house snakes are also noteworthy because, in recent years, the snakes have been used as a model organism for studies of development, behavior, hormones and reproductive biology.

Funding for this research was provided by a grant from the National Science Foundation. The project was a collaboration between Whitman and the University of Texas at El Paso and the Centre de Recherche en Sciences Naturelles and Groupe d'Etude et de Recherche en Diversité Biologique.