The Tekisuijuku (滴水塾) is a residential interest house that serves as a home for students interested in speaking Japanese and learning more about Japanese culture. 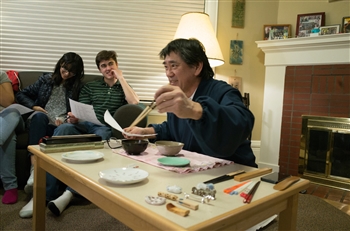 Visit the Interest House section of the site for more information about the Tek and Whitman's other interest house living options.

Tekisuijuku: History of the name

In the spring of 1984, a group of Japanese language students worked with Professor Takemoto to petition the administration to establish a house devoted to Japanese studies. The petition was approved and the new house was established in the fall semester of 1985. Initially, everyone referred to the new residence hall as the "Japanese House." However, the name sounded a bit strange. So, just before the opening of classes in the 1988-1989 academic year, Professor Takemoto placed a small wooden sign next to the door of the Otis Street House that identified it as Shōfūan (松風庵 or "The Wind in the Pines Hut"). In the world of the Japanese tea ceremony, the term "wind in the pines" remembers the sound of the water boiling in the kettle; it also serves as a reminder that beauty in life often appears in places normally shunned or in things that people consider as slight and insignificant. The name, suggests, too, the life of a scholarly, poet and hermit in a modest hut, renouncing secular pursuits and awakening a profound compassion for other people and beings who share a similarly austere existence.

This sign, however, disappeared during the winter of 1988, before this name became officially recognized. In May of 1989, Professor Takemoto's father-in-law, Gadjin Nagao (Professor Emeritus of Kyoto University) visited Walla Walla on his way back to Kyoto after spending a semester as a Visiting Professor of Buddhism at the University of Calgary. When he heard that the original sign had disappeared from the "Japanese House," he suggested that the house be renamed "Tekisuijuku."

Learning that the name Walla Walla could be understood as "many small rivers," Professor Nagao suggested the use of the word "Tekisui" (滴水 or "drops of water falling into pools and small streams"). Tekisui echoes the name of a garden located in front of a famous tea room on the grounds of Nishi Honganji, the headquarters of Shinshū Buddhism in Japan. This tea room and pavilion has close connections with the Yabunouchi School of Tea which represents the style of tea that Professor Takemoto practices and teaches; and the Nishi Honganji is the temple where Professor Takemoto was ordained as a Buddhist priest. The word "Juku" (塾) refers to a residence or place devoted to "studying." Professor Nagao named the house and wrote the characters on a wooden sign now preserved inside the Tekisuijuku.

In the fall semester of 2005, a house on the corner of Stanton and University was established as the new location for the Tekisuijuku. A sign written by the calligrapher Fujii Yoshiyasu now identifies the house from the outside.