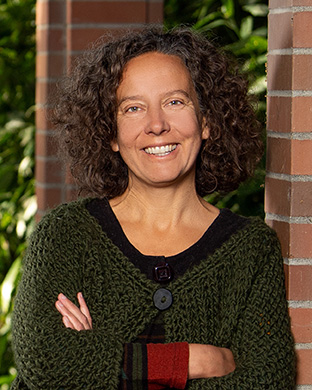 Eunice is an Associate Professor of Anthropology and Environmental Studies at Whitman College in Walla Walla, Washington. She completed her Ph.D. in cultural anthropology at the University of California Santa Cruz and has taught at the University of Washington's Program on the Environment, and held a Fulbright fellowship in addition to fellowships at the Rachel Carson Center for Environment and Society in Munich, and at the Leibniz Institut GWZO in Leipzig. For more than 20 years she has been researching and writing about conservation politics in nature preserves in Eastern Europe, particularly Poland's Białowieża Forest. Her book, "Foresters, Borders and Bark Beetles: The Future of Europe's Last Primeval Forest" is now published with Indiana University Press (2020). With filmmaker Jodie Baltazar she produced and directed a documentary film, 'Black Stork White Stork' (2014), found on the Rachel Carson Center's portal. Black Stork White Stork traces the fate of an innovative aging bachelor and with declining stork populations in the Białowieża Forest. She is currently researching the rewilding Europe phenomenon, looking at the hyperbolic way that the idea of Europe relates to the idea of rewilding. Other research experiences include studying private and public land distinctions in the State of Maine, how the commons are constructed along Warsaw's Vistula river banks, and how historical pogroms interact discursively with nature conservation in Poland. Her experiences working for US-based land management agencies, including the National Park Service, the U.S. Forest Service Pacific Northwest Research Station, and the Washington State Department of Natural Resources have helped her develop interdisciplinary approaches to environmental problem solving. Her goal is to help people embroiled in nature conservation conflicts better understand themselves, those they are in conflict with and the globally interconnected world that frames their conflict.