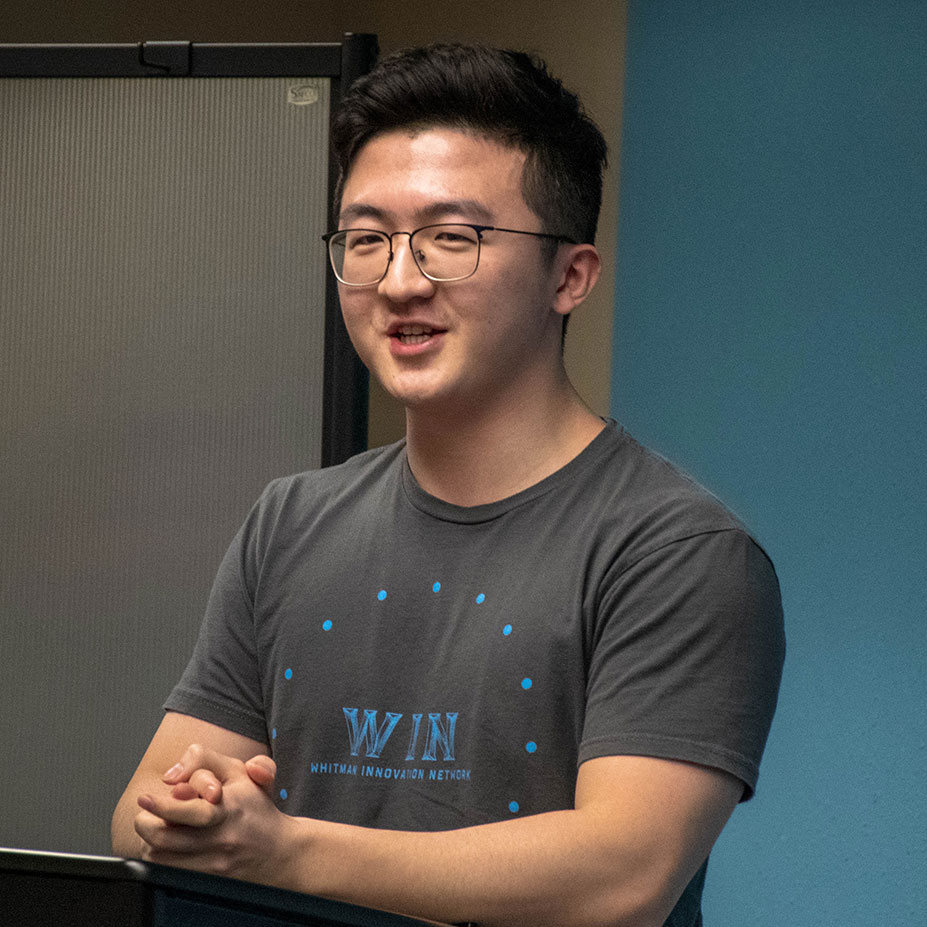 As a first-year student, Roderick Wang ’20 had some cool ideas for new apps. But he didn’t know where to go, or how to get started developing his idea into a viable product.

That’s when Wang and some other students got together and formed the Whitman Innovation Network, or WIN, a student club focused on innovation and entrepreneurship. They wanted to create a way for students like them to develop their skills and learn from experts, and each other.

This spring, Wang and the WIN members celebrated the physical manifestation of that goal: Whitman College opened the WINcubator — a space dedicated to entrepreneurial students and business incubation.

“The goal is to serve the community and help student entrepreneurs turn ideas into action,” said Wang, an international student and economics major at Whitman.

A Project Three Years in the Making

On Feb. 21, 2020, WIN hosted an open house to introduce the WINcubator to the college and Walla Walla community. Located in the basement of the Whitman College Technology Services building on Main and Touchet streets, the project was funded by a $25,000 grant from the Port of Walla Walla, a nonprofit dedicated to tourism and business development in the valley.

The vision for the space has evolved since the college initially brought the proposal to the Port of Walla Walla, when it was billed as a space for students to do “creative coding,” said Computer Science Associate Professor Janet Davis.

Then, the project was in collaboration with the Computer Science at Whitman (CS@W) club, which eventually became part of WIN, Davis said.

But one part of the vision that never changed was that the center would be a nonacademic space to serve not just Whitman College students, but also those from Walla Walla Community College and Walla Walla University.

“It was just amazing to walk in the room and see that huge crowd — not only the students but also people from all three colleges,” Davis said of the open house. “And so much community support. It was really exciting.”

Davis said it works well for the WINcubator to be part of a group that isn’t based in a department or major.

“I actually really like that the space has passed into the hands of the Whitman innovation Network, because we always envisioned it as a co-curricular, nonacademic space,” she said. “You don’t need to be a computer science major to get involved in entrepreneurship in the tech world. I’m really excited to see that space associated with a student group that doesn’t belong to any one department.”

The cross-disciplinary nature of the space is just what the Port of Walla Walla hoped for, too.

“This is exactly what we hoped would occur with our investment — a place for the entrepreneurial spirit and collaboration,” said Pat Reay, executive director of the Port of Walla Walla. “What I hope is that entrepreneurs can come together here to create ‘things’ — I don’t know what those ‘things’ will be! But this gives a home for that to happen.”

The Port of Walla Walla is committed to bringing tech-based business to the valley. One of its tenants is Ingeniux, a digital content management platform based in Seattle. Founder Jim Edmunds ’78 moved part of the business to Walla Walla three years ago, and is hoping to expand his Walla Walla workforce this year.

“There’s a lot of great things in Walla Walla that recommend itself to innovation,” said Edmunds, who studied history at Whitman. “You don’t have to go to Seattle, Boston or New York to be an entrepreneur.”

In a short speech during the open house, Edmunds shared part of his journey after Whitman and the effort to start Ingeniux in the early days of the internet — and then survive the burst of dot-coms.

“I discovered what my real passion was — it was about building something that would make a difference in people’s lives, in the lives of my clients,” he said. “It’s a long road. It requires passion.”

The WINcubator is a direct result of the passion the Whitman students bring to digital innovation. But they also aren’t alone.

In addition to the Port of Walla Walla, their vision is supported by the Walla Walla Community Council, which brings together people from across the region to tackle significant topics. The council’s 2019 report “Education as a Path to Economic Growth," calls for the creation of spaces just like the WINcubator.

“We want to see how we can support this,” said Mary Campbell, executive director of the Community Council, who noted other spaces like the wine incubator at Walla Walla Regional Airport. “We talk about spaces — some literal, some metaphorical. We see this as this constellation of entrepreneurship.”

Part of the Community Council’s work is to connect these other spaces together and see how the work can cross-pollinate and support each other, Campbell said.

Patience Taruwinga, dean and professor of business at Walla Walla University, said he’s excited for the opportunity the space provides for his students with an entrepreneurial mindset.

“It provides a place for students to come and network and be able to do something great,” Taruwinga said. “I believe seeds are planted in spaces like this.”

WIN is already working on planting those seeds. It will be hosting an Hour of Code event this spring to teach anyone who is interested the basics of coding. And members are already talking with members of the Whitman Consulting Group about how the two clubs can collaborate.