R. Cargill Hall '59 received the Major General I.B. Holley Award from the Air Force Historical Foundation for his sustained, significant contribution to the documentation of Air Force history. Hall is a historian and author who served as chief of the research division and deputy director of the Air Force Historical Research Agency, and as a historian at Headquarters Military Airlift Command and Headquarters Strategic Air Command. He lives in Arlington, Texas. 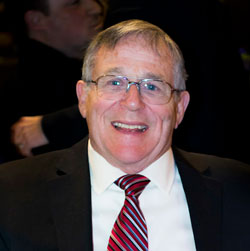 Jim Knowles '64 was elected treasurer of the Garfield Golden Grads, his high school alumni association, which raises funds for scholarships. In the past year, they sent 35 scholars to schools with $110,000 plus earnings from their $1.1 million endowment.

James Driscoll '65 had his book, "Shakespeare and Jung - The God in Time," published by Academica Press. Driscoll, who earned his doctorate in English literature from the University of Wisconsin-Madison, lives in Las Vegas, Nevada.

John Rector '65 has published and updated a revised edition of "The History of Chile," originally published in 2003 by Griffin. Rector is a professor of Latin American history at Western Oregon University in Monmouth, Oregon.

Roy Carlisle '69 is the publishing director of a new Silicon Valley-based publishing house, Transpersonal Publications, part of the Institute of Transpersonal Psychology Foundation. He will develop and implement the foundation's publications strategy for new books and a scholarly journal. Carlisle brings more than 40 years of experience as an executive in the trade and scholarly book industry to this position. 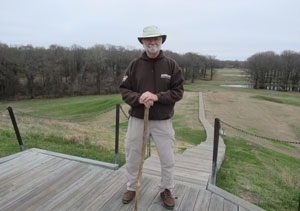 Jack Greene '71 is in the process of developing and distributing Chinese and Japanese versions of "War Drum Games" and "Bonsai Games," two titles from his import and export wargame company, Quarterdeck International. Greene has established his company in his new home in Vicksburg, Mississippi, with his wife, Kathleen.

Mary Anne Maul '71 has a new job as an attorney with the U.S. Army Corps of Engineers in Galveston, Texas.

Alex McGregor '71 has been recognized as a distinguished resident of Pullman, Washington. He was honored with a permanent engraved tile placed in the Walk of Fame sidewalk in downtown Pullman. McGregor is president and chair of a farm services business, the McGregor Company, serving growers in Washington, Idaho and Oregon.

Rick Stevenson '77 published a new book, "21 Things You Forgot About Being a Kid: a partial guide to better understanding our children and ourselves," from 5000 Days Publishers. The book is based on The 5000 Days Project - a longitudinal study consisting of over 5,500 in-depth, personal interviews with kids from six continents over the past two decades, positing that remembering what it's like to be a kid can help us be better parents and better people. Stevenson lives in the Seattle area. 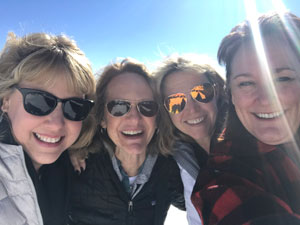 Kirby Gould Mason '86 has been included in "The Best Lawyers in America" for 2020, recognizing her outstanding achievement in her area of practice. Mason practices medical malpractice law at HunterMaclean in Savannah, Georgia. 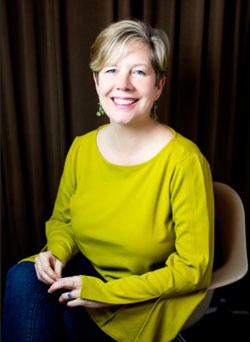 Heather Pilder Olson '89 is editing her latest project, a documentary on homelessness in Aberdeen, Washington. Other work in progress includes a TV pilot script, "Crack the Whip." Olson is part of the inaugural class of Green Room Fellows, a yearlong writing program designed to increase access and support for Northwest screenwriters through the Bigfoot Script Challenge. 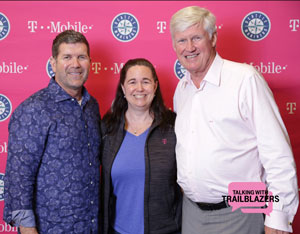 Rosemary Nolan Shaw '90 had a celebrity visit at her T-Mobile office in Seattle: T-Mobile founder and Seattle Mariners chair John Stanton '77 and Hall of Famer and Seattle Mariners legend Edgar Martinez. They offered their views on the importance of improving diversity in sports, and Stanton spoke about his pioneer days in the wireless industry and his role with the Mariners. 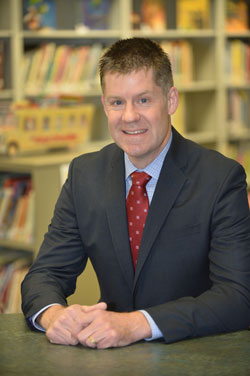 Tom Hagley '90 published "Cultivating Community Schools" in the August 2019 issue of School Administrator magazine. He works as chief of staff and chief communications officer for Vancouver Public Schools in Washington. He also was spotlighted in a new book, "Broader, Bolder, Better: How Schools and Communities Help Students Overcome the Disadvantages of Poverty," published in 2019 by Harvard Education Press. 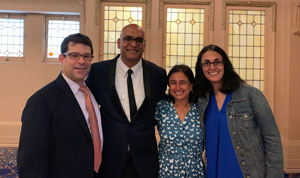 Shilpa Goradia Bratt '91 gathered with friends to celebrate the appointment of Ketu Shah '90 as judge on the King County Superior Court.

Jennifer Walsh Bowman '92 composed, recorded and produced her first solo piano album, "Piano Palettes," which received silver medals in the composition and instrumentalist categories of the Global Music Awards. Bowman lives in Olympia, Washington, and is an accompanist in the music department at Pacific Lutheran University.

Christopher Perdue '93 received a promotion to the rank of captain in U.S. Public Health Service. He serves as a senior health security analyst in the Department of Health and Human Services, recently becoming director for the National Biodefense Science Board in Washington, D.C.

Heather Wright '99 was recently awarded a 2019 Presidential Early Career Award for Scientists and Engineers, the U.S. government's highest award for scientists and engineers in the early stages of their independent research careers. Wright is a research geologist for the Volcano Disaster Assistance Program, a cooperative partnership between the U.S. Geological Survey and U.S. Agency for International Development's Office for Foreign Disaster Assistance. She lives in Portland, Oregon, with her husband and two daughters.

William Conley '01 was appointed senior vice president and chief technology officer at Mercury Systems. He will direct and accelerate Mercury's vision and leadership in technology that provides solutions to the aerospace and defense industry. Previously, Conley was program manager for the strategic technology office at the Defense Advanced Research Projects Agency.

Audrey Coulthurst '04 has published two young adult books this year: "Starworld," from Candlewick Press; and "Of Ice and Shadows," from Balzer + Bray, a sequel to her 2016 novel, "Of Fire and Stars." Coulthurst earned a master's in writing from Portland State University and lives in Santa Monica, California.

Samantha Howell Barnhart '04 received the Outstanding Young Alumni Award from Albany Law School, given to alumni who have graduated within the past 10 years and have demonstrated extraordinary commitment to Albany Law School through consistent volunteerism and engagement. Barnhart is the pro bono director at Southern Legal Counsel in Gainesville, Florida. 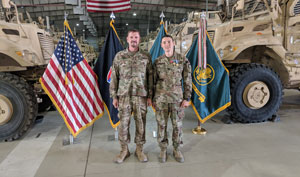 Michael Hankel '04, received the Bronze Star Medal, the Army Achievement Medal and a NATO medal for his service in Afghanistan. His next post is Kuwait. 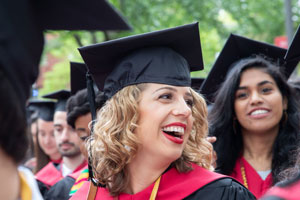 Allison Gill Sanford '10 graduated from Harvard Law School in May, and will clerk for Judge William Dato on the California Court of Appeal. After clerking, she plans to work in civil liberties and criminal justice reform.

Dylan Plung '11 earned his Master of Arts in interdisciplinary studies from the University of Washington in Seattle. He has one academic article published, another under review, and has spoken at Harvard and the Association for Asian Studies. He received major national fellowships, including Foreign Language and Area Studies and Blakemore Freeman, to study at the Inter-University Center for Japanese Language Studies in Yokohama, Japan.

Ryan Campeau '13 was selected as a National Endowment for the Humanities Landmarks Scholar for a summer program on Asian Pacific American experiences in the Pacific Northwest. The weeklong program was held at the Wing Luke Museum of the Asian Pacific American Experience in Seattle. Campeau teaches fourth grade in College Place, Washington.

Eric Schmidt '13 received his architectural license from the Montana Board of Architects and practices with High Plains Architects, P.C., of Billings, Montana. His work centers around high-performance, environmentally resilient design, historic rehabilitation, adaptive reuse and community development. Schmidt earned his Master of Architecture with Certificate in Technical Teaching in Architecture at the University of Oregon in 2016.

Tory Davidson '15 works as community engagement manager for Storycatchers Theater, a nonprofit musical theater group that works with justice-involved youth in Chicago. Through programming inside and outside of justice centers, children and young adults turn their life stories into musicals.

Hannah Novak '17 has illustrated a children's book, "The ABCs According to Charlie," written by Lindsey Parkinson and published by Blysster Press. A fine arts major, this is her first published work. Novak's mother is Traci DeMarco '87.