Computer science major Isaiah Banta ’20 has come a long way from no intention of attending college to total immersion in campus life at Whitman.

Banta is a black belt in Taekwondo, a dynamic form of martial arts that features high jumping and rapid-fire kicking. A student of the discipline since the age of 10, Banta graduated high school planning to skip college altogether and teach Taekwondo instead.

After a few gap years and dashed dreams of starting his own martial arts studio, Banta began the college application process. Banta’s aunt, Whitman alumna Leticia Lopez ’94, was the one who put Whitman on his radar.

“She’s a big reason why I came to Whitman,” Banta said. “She always talked about how great the community is here.”

Today, Banta has taken to college life at Whitman. He serves as a resident advisor at Lyman House, student leader in the Summer Fly-In Program, co-founder (with Zach Clark ’19) of the Martial Arts Club, senator for Associated Students of Whitman College and tour guide admission team manager.

“Giving tours is so much fun,” Banta said. “It’s a chance to interact with people who aren’t familiar with Whitman.”

He’s especially found fulfillment in his role as an RA.

“Basically, I’m a community builder and emotional resource, and general resource to campus. I host section dinners and meetings each week — everything from tea breaks to playing games or just hanging out. One night I took my section to the wheat fields outside Walla Walla for stargazing. We ate burritos and sang ‘Twinkle Twinkle Little Star.’” 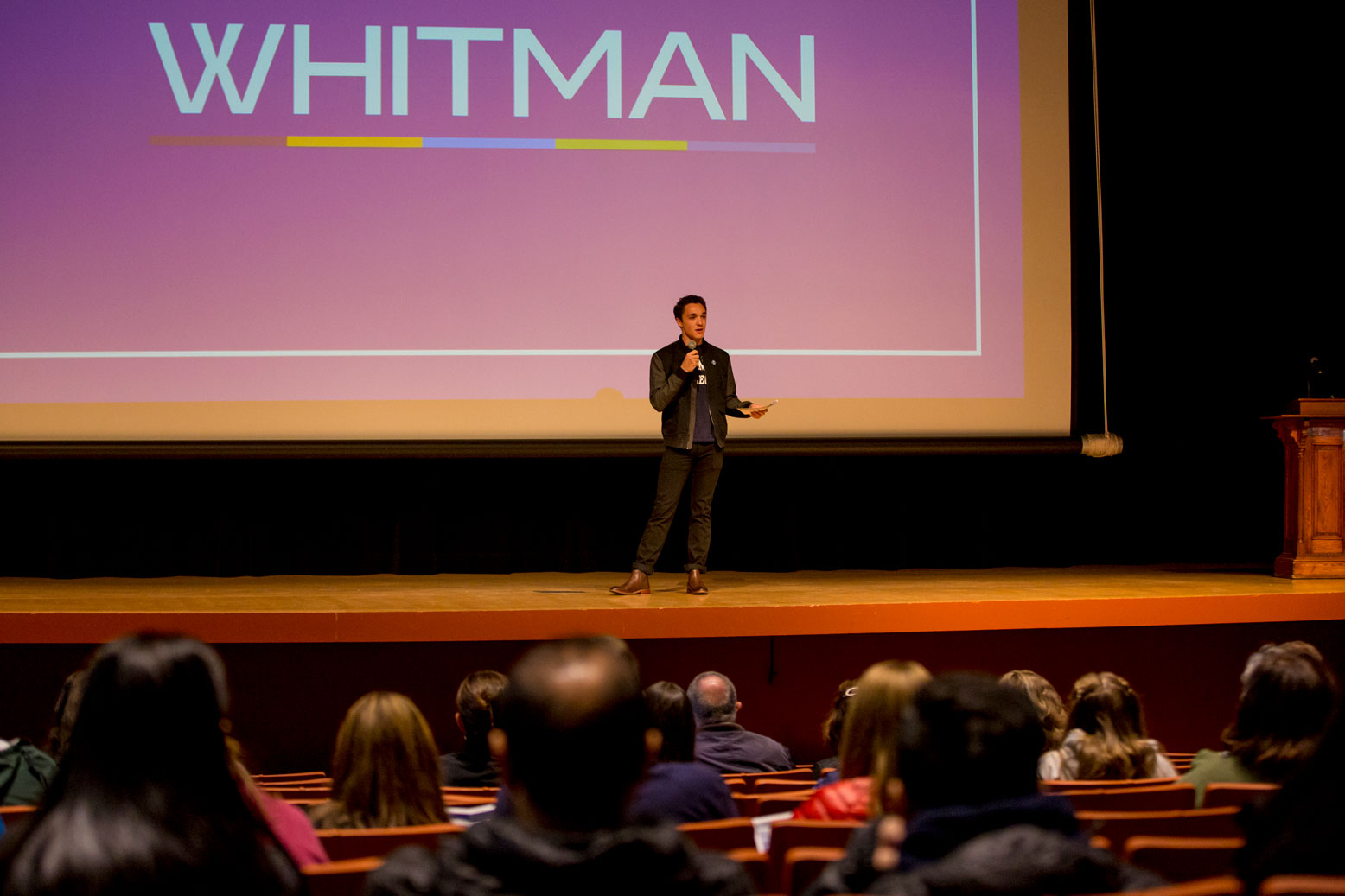 Isaiah Banta ’20 speaks to prospective students and their families about life at Whitman during a Fall Visitors Day presentation at Cordiner Hall.

A working-class student who grew up in Anza, California, Banta took part in Whitman’s second Summer Fly-In Program in 2016 thanks to encouragement from his mother. Banta credits his mother, Anita Lopez-Salazar, with giving him the resources and confidence to pursue his dreams. On the Fly-In he was able to meet many students that had a similar story to his own.

“It was amazing. I can still name everyone that was part of my Fly-In,” he said.

The Summer Fly-In program helps first-generation and working-class students feel comfortable, capable and prepared for their first time on campus. Over several days during the summer, they meet key staff and faculty, learn about resources and make connections with other new students. Banta now participates as a student leader.

“Talking about these things helps people get closer together,” Banta said. “Before the Fly-In I wouldn’t have had the confidence. It humanized the institution.”

Maggi Banderas ’05, associate director of the Intercultural Center and faculty adviser to the Martial Arts Club, has watched Banta soar.

“Isaiah is a compassionate, kind, enthusiastic and intentional individual. This comes across in the dedication he invests in his academic work, the different ways that he develops relationships and builds community, and his thoughtfulness in creating spaces where others feel comfortable and included,” she said. “His involvement in different areas on campus is preparing him for success in future leadership opportunities and endeavors.”

In the classroom, Banta enjoys studying algorithms for game theory and the ethics of artificial intelligence. He hopes to work for a high-tech company someday and is seeking an internship with a software firm.

By studying computer science and learning to write code, Banta has gained insight into how humans solve problems.

“Humans are amazingly smart at abstracting things. We’re really good at putting a seed in the ground and knowing that it will grow, but not necessarily how it happens,” he said.