Written by Afrika Brown
Photography and videography by Rebecca Devereaux

Brenna Two Bears ’17 was awakened to her life plan around age 10.

“The women in my family worked toward their higher education while raising children, and prioritized cultural revitalization along the way in order to help our communities,” said Two Bears, who is a member of the Ho-Chunk Nation, with affiliations with the Navajo Nation and Standing Rock Sioux Nation. “I grew up with these role models and their influence led me to seek a career in museums, be it art or historical.”

Two Bears’ path has enabled her to travel from the West Coast to the East Coast and back again, all in pursuit of her goal. 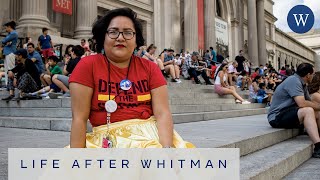 Guideposts Along the Path

Two Bears grew up in Black River Falls, Wisconsin, and Flagstaff, Arizona. She graduated from Whitman with a bachelor’s degree in art history and visual culture studies (AHVCS) in 2017. Two Bears credits her time at Whitman for giving her a greater sense of empathy, while also stimulating her consciousness.

“Though it was never easy going to college at Whitman, I know it wouldn’t have been different anywhere else. At least there I was able to come to my own conclusions about the world and its injustices in an environment going through its own process to be more inclusive,” Two Bears said.

Two Bears also praised professors within the AHVCS department for assisting her to develop her viewpoint as she prepared to enter the world.

“Without Dennis Crockett’s Intro to Art History course, I would never have dreamed that my perspective could matter in the world of art history,” Two Bears said. “Krista Gulbransen taught her course on museums and the politics of display, and focused heavily on the history of colonization in museums.”

With Gulbransen’s assistance, Two Bears created her independent study, which focused on the way indigenous people, culture and art are represented in museums.

“In her independent study, Brenna examined the history of indigenous representation — and misrepresentation — in the museum. The ways in which display philosophy intersects with politics was central to her research. Brenna also explored potential curatorial techniques to decolonize museum spaces,” Gulbransen said. “As a culmination of this independent study, Brenna enacted these new curatorial strategies by designing and installing a display case in Maxey Hall using indigenous objects from the Maxey Museum collection. In a paper at the undergraduate conference, Brenna discussed the ways in which her installation was designed as a critique of traditional museum display and opened up new spaces for discussion of indigenous cultures.”

After graduation, Two Bears received an internship at the School for Advanced Research (SAR) in Santa Fe, New Mexico. Founded in 1907, SAR promotes indigenous creativity through artist residencies and stewards one of the world’s finest research collections of Southwest Native American art.

Because of SAR’s small staff size, Two Bears was able to work in various departments. The experience provided her the opportunity to work with their collection of Navajo rugs, teach children at the Santa Fe Youth Detention Center and serve as a representative for SAR at Native art conferences. It also inspired her to apply for other internships, one of which was the Lifchez/Stronach Curatorial Internship at the Metropolitan Museum of Art in New York City, which she received in 2018.

“When I realized I got the position, I ran outside to feel the earth beneath my feet and to see the sky. I took a moment to acknowledge the people who this land belonged to before colonization, to thank them for taking care of the land for as long as they did, so that I could be there centuries later,” Two Bears said. “I made sure to explicitly thank my ancestors as well, as I have been doing since I could understand gratitude. They, all of them, went through what they did so that I could be here and do what I can.”

Two Bears is passionate about Native collections. Part of her internship was to support the Native American Graves Protection and Repatriation Act, which returns culturally sensitive and funerary objects back to their tribes. The first day of her internship included the opportunity to sit in on meetings that would shape the history of how the museum told the story of her people, which for Two Bears was an eye-opening experience. 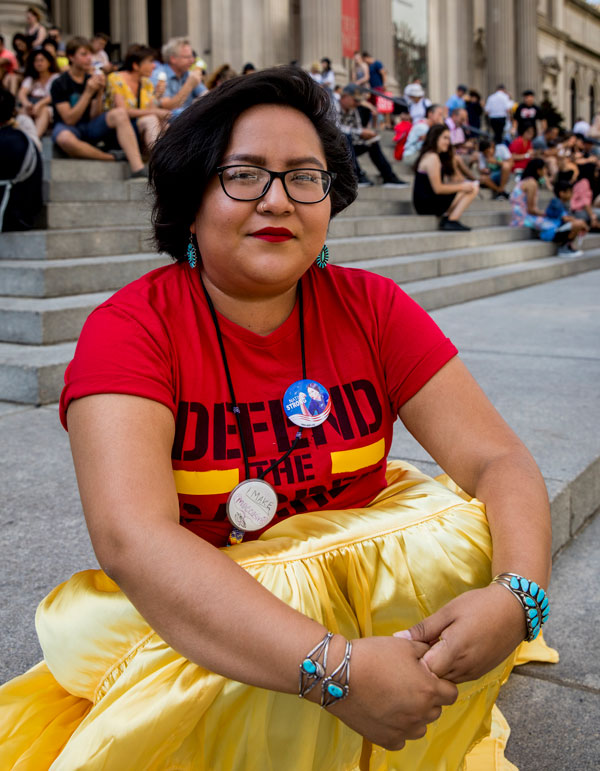 Brenna Two Bears ’17 spent the summer as an intern at The Metropolitan Museum of Art in New York City.

“Places that originally exotified and othered my people and our art were now welcoming our input seriously, for the first time,” Two Bears said.

Two Bears also conducted specialized tours for the museum. As part of the tour, Two Bears was allotted four objects that best represented her chosen theme of environment.

“I chose pieces that would reflect the experience of a contemporary indigenous art historian and queer brown woman,” Two Bears said. “I wanted to emphasize the different ways I connect to the environment and get the visitors to consider how that is represented in the art.”

Two Bears’ internship with the Met was scheduled to run through 2019, but she decided to end her internship early to pursue opportunities that aligned with her ultimate goals.

“I am currently in the process of working with Deana Dartt, who was the Anne Ray Scholar when I was the Anne Ray intern at SAR, and her business, Live Oak Museum Consulting,” Two Bears said, “I know that she is hoping to get consultants based in their hometown where the tribes are and help out museums in that region. So, since I’m in the Southwest, I would be here working and consulting with museums in the Southwest.”

In order to become a certified consultant, Two Bears will need to train with Dartt for one year. While she waits for her training to begin, she has returned to Arizona and is becoming certified as a substitute teacher.

“I’m actually very happy that this happened because when I thought about working in museums, I thought that I would have to kind of suffer through working a full-time job with a museum for a long time to build up my name so I could become a consultant, so I can help out different museums,” Two Bears said. “You know the younger, angrier part of me is really excited at the opportunity to go to a museum and say, ‘You’re doing this wrong,’ and have them actually listen. Instead of having to work in a place like that, I can be hired to help them change it.”