Commissioner Deborah Kafoury fights for affordable housing for all

A third-generation Whittie, Deborah Kafoury ’89, has dedicated her career to ensuring that everyone in her community has a place to call home.

Kafoury’s career in activism began at Whitman, where she served as president of her sorority, Delta Gamma, and also helped launched a women’s resource center on campus. But she never imagined herself as a career politician.

“I majored in English, and I thought that I would become a journalist,” Kafoury said. “But the first job I got out of college was working for Congressman Les AuCoin, and I think after that I just didn’t really look back.”

She served in the Oregon Legislature from 1999–2005 and was the youngest woman to be elected as House minority leader. In 2008, she was elected to the Multnomah County Commission, and then elected as Chair in 2014.

“I felt like the issues the county focused on were issues that were my passion,” Kafoury said. “Multnomah County serves as the community safety net, so when people have nowhere else to turn – they’re elderly and disabled, they have health issues, they need assistance with job training – those are the folks that Multnomah County serves.”

How did you first become interested in community issues?

In the family I grew up in, being involved in the community and giving back to the community wasn’t a question of if but when and what. Both my parents — father Stephen Kafoury '64 and Gretchen — were extremely involved in the greater Portland community. They both held elective office. They were active in politics and in social change at a time when, in the early ’70s, people felt really energized by fighting against the Vietnam War and fighting for women’s rights and immigrant rights.

When did affordable housing become an important issue for you?

I always was interested in homelessness and affordable housing. As a child, I saw how my mother’s small acts of kindness changed people’s lives. It wasn’t unusual for me to wake up in the morning and see someone at the breakfast table I hadn’t seen before, someone who was escaping domestic violence, a woman and her child who had nowhere else to stay. Sometimes they’d stay with us for a night or two, sometimes they’d stay for a year or longer. Our house was a safety net for a lot of people.

By the time I was in the Oregon Legislature, Portland had started really changing and becoming a cooler, hipper place to live. Rents had started rising. I was hearing from my constituents about how they couldn’t find a place to live. I started looking at legislation to get more money into construction of affordable housing.

It was really difficult at the state level. At that point in time it was really considered more of a big city issue. Some of the folks in rural Oregon weren’t as concerned about it. I have to say, boy, that has really come 180 degrees. Today there’s not a county in Oregon where someone who’s working full-time at minimum wage can afford to rent an apartment. It’s really about poverty. If you look at single moms with kids, the percentage of them living in poverty, it’s overwhelming. It’s shocking.

Is affordable housing an issue specific to Oregon?

It’s a national issue. I think if you look at headlines from any newspaper around the country, communities are feeling the same pinch. One of the problems is the federal government over the past 30 years has really disinvested in affordable housing and Section 8 vouchers. The budget for the Department of Housing and Urban Development has decreased dramatically. And so local communities are left to try to fill the void. In Portland the number of units of housing being built has not kept up. So when you have a lack of housing it drives the cost up and the competition for those available units. You see this all up and down the West coast.

What steps have you taken to address homelessness?

When I started in 2009, I was focused on family homelessness, because that was our area of responsibility. We really hadn’t seen a lot of visible family homelessness in the early 2000s. Then we started seeing moms and dads and kids out in front of grocery stores, sleeping in their cars. We were hearing stories from teachers and school administrators that kids were coming to school and they hadn’t had a good night’s sleep because they were sleeping in the car.

A few years ago, we combined all of the county and city dollars and staff and plans under one roof, and now we have a Joint Office of Homeless Services. We jointly created a plan called a “Home for Everyone.” Now we have hundreds of community members, business partners, the faith community, philanthropists, local government officials and people who have “lived experience,” all coming together to figure out what needs to happen, to really give us that direction forward.

Because of those efforts, we’ve put an unprecedented amount of funding into our three strategic areas. One is to keep people from becoming homeless in the first place. We can help with rent assistance to help keep people in their homes, which obviously is the cheapest and the most humane way to deal with housing security. Second, we doubled the number of publicly funded shelter beds in our community. The third thing is helping people get back into housing as quickly as possible after they’ve become homeless.

Even as we’re doing all this and serving more people than we’ve ever served before – last year we served over 30,000 people in Multnomah County – we’re still just barely keeping our head above water. We have more and more people who are falling into homelessness every day. 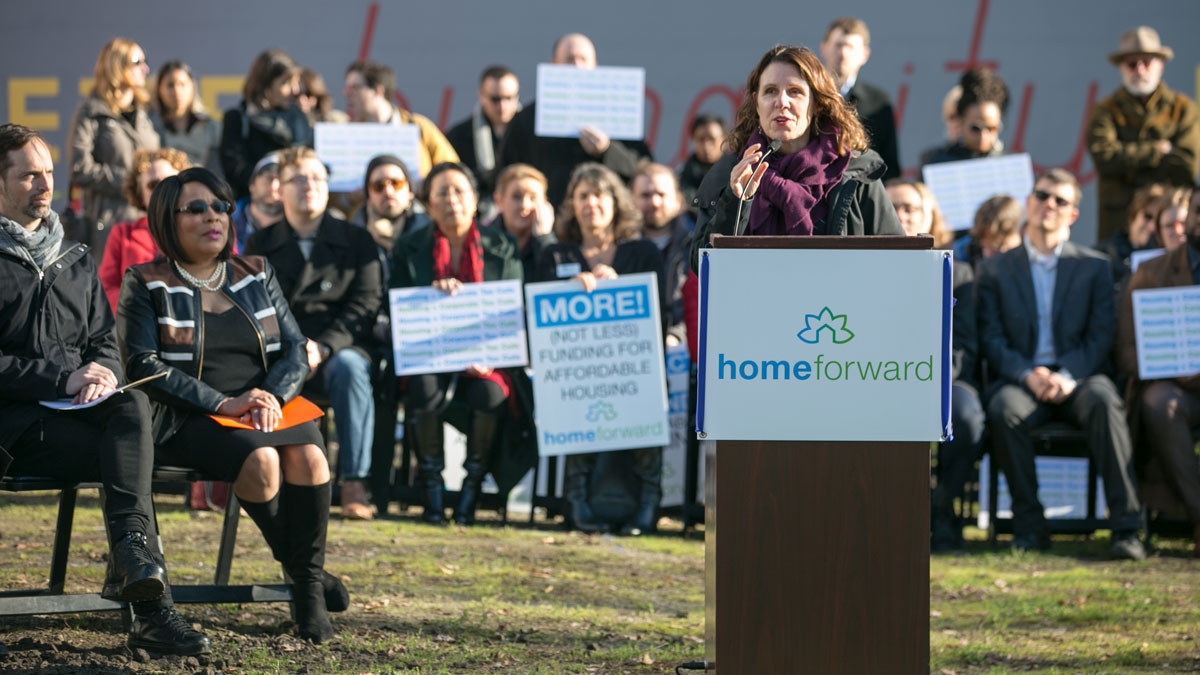 Are the demographics of homelessness changing?

I think there’s a growing realization that, with as many people who are experiencing homelessness, there’s many different stories as to why people become homeless. We’ve really worked to put a face to stories to show the public that it’s not the “other” or “them” — it’s our friends, our family, our neighbors who could become homeless.

The number of homeless people who are elderly or disabled has been growing really rapidly. That shows there is a correlation between the price of people’s housing and the number of people who are sleeping on the streets. It used to be — even five years ago — that you could afford a studio apartment in the Portland metropolitan area with the dollars you were receiving from social support programs, about $730 a month. Now there’s not an apartment in town you can rent for that.

What can we do, either on the individual or government level, to address homelessness?

The really important first thing to do is to show compassion. I think what’s lost in our country today is realizing that we’re all neighbors. We’re all in this together. Too often we point fingers at people and blame people for what’s going on, instead of figuring out how we can work together to solve a problem. That could mean that you embrace a homeless shelter coming into your neighborhood, even volunteer at the shelter, serve meals, organize a food drive or a coat drive. … Similarly with affordable housing complexes that are being built -- be supportive of that. If I had a dime for every time I heard, “I’m supportive of affordable housing, but I just don’t think it’s a good fit in my neighborhood.”

Where does that negative sentiment come from?

Fear. There’s a lot of fear right now. Even though the economy is booming and there are some people who are financially better off than they have ever been, there’s still a lot of people who are struggling, feeling like they’re strapped. We’re in a really uncertain time. I don’t know that people have felt this untethered. … Instead of reaching out to give somebody a hand, sometimes people just want to retreat.

What’s next in your fight for affordable housing in Multnomah County?

Our next initiative is around permanent support of housing. It really is more complicated than just giving somebody keys to an apartment or a couple months of rent assistance. It’s for those folks who have a severe disability, drug addiction, or severe or persistent mental health issues. They need more than just an apartment; they need an apartment with social services attached. We need to bridge that gap for them so that they can be successful. Communities are stepping up, and we want to do the same here.