What We Do for Others

In sharing stories of people facing humanitarian crises in Bangladesh, Maherin Ahmed '11 bridges the worlds of the privileged and the poor.

Across the street from the high-rise apartment building in Dhaka, Bangladesh, where Maherin Ahmed '11 grew up with her parents was a slum, filled with men, women and children sleeping in the scorching sun. Next to the slum was a UNICEF office. Even as a young girl, Ahmed wondered about these stark divides.

"The struggle between the worlds of plenty and the worlds of need-that is something that I really wanted to explore," said the economics major and religion minor.

Ahmed has tried to bridge these two worlds in a career "where I can see people being helped and where I could play a part," initially at humanitarian aid organizations such as UNICEF, Red Cross, Plan International, Save the Children and Oxfam and, as of last August, at the United Nations World Food Programme (WFP).

Her work as a WFP communications officer-a role she also held in 2015 and 2016-is "a very different kind of a job. It's challenging, but it's also very rewarding."

She recently spent three weeks in a remote part of the country at Rohingya refugee camps. According to a recent U.N. report, more than 600,000 Rohingya people-a Muslim ethnic minority fleeing Myanmar-have arrived in Bangladesh since August.

"That was a very intense experience. The crisis is still very much fresh," Ahmed said. Many of the refugees she spoke to had walked for 12 or 13 days without food or water, hidden in jungles to escape life-threatening situations or had family members die during their flight.

Ahmed also has to respond at short notice to emergency situations. On one such trip last fall, she traveled to the site of a flood in Northern Bangladesh. She talked with beneficiaries of WFP's disaster response teams, which provided money or food-primarily high energy but easy-to-prepare staples like rice and lentils-to people recovering from the flood.

"It is a very difficult thing and it is mentally exhausting," Ahmed added, so aid workers, too, must take care of their physical and mental wellbeing.

"When I'm in a disaster response area or in the camps, I cannot tune out and come back to my hotel and forget about it, because it's just not human to function in that way," she said. "We forget how fortunate we are until we see these kinds of dire situations, and then we realize that we have food to eat or a country to call our own. These really are privileges and blessings of life that we forget."

When conducting her research, "The first step is finding someone who is ready and willing to talk to us and is in a mental state to communicatewith us happily, because what we do not want is to add to the trauma," explained Ahmed, who also worked as a newscaster for Bangladeshi television station ATN Bangla before she came to Whitman.

Most beneficiaries are not used to video equipment and are daunted when Ahmed goes over the filming process.

"It's also not only [vital] that they understand, but also that their family understands," she said. "Because of the patriarchal and conservative structure of Bangladesh, when a wife is being filmed, the husband has to be okay with it."

After they gain consent for filming, WFP staff sometimes turns the camera on without letting interviewees know because "when someone's aware that this is the final take, they get nervous. But when it's still a dry run, then they're more comfortable. We tend to get good shots during a dry run," Ahmed explained.
Quayyum Abdul, a communications officer for the United Nations Development Programme in Bangladesh, described Ahmed as "a great team player." They also collaborated when Abdul was at Oxfam and Save the Children.

"We worked together on many projects-one of them in a humanitarian sector in a flood-prone area-where her support was tantamount in terms of getting the stories out timely and efficiently," Abdul said. "She has proven herself a very hard worker who is ready to go anywhere when there is a need and get the deliverables ready on tight deadlines."

The Influence of Friends

The other humanitarian organizations for which Ahmed has worked take slightly different approaches to their work. Red Cross, for example, provides food aid like WFP but also has longer-term programs like blood banks.

Ahmed traced many of her career choices back to Humayun Kabir, a retired director in the U.N.'s Office of the Under-Secretary-General for Management. Kabir became friends with Ahmed's father through a mutual connection-Kabir's university roommate was Ahmed's uncle. 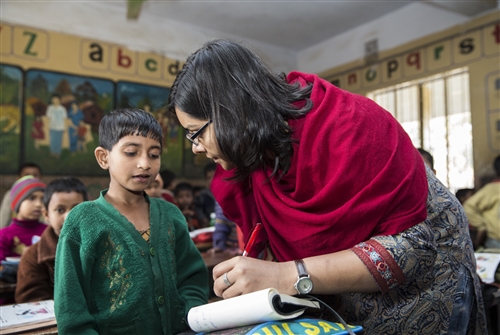 "I was really fascinated that he worked in this organization where you can work in different countries," Ahmed recalled. "I am still in touch with him and he knows how fond I am of him, but I don't think he knows that I actively pursued a career in the U.N. because I was so influenced by him."

"From the time she was a junior school student, Maherin showed early signs of promise as an exceptional girl: focused, talented, culturally inclined and aware of pressing social issues," Kabir wrote in an email. "She is committed to improving the lives of the less privileged and makes it her mission to achieve results to that end."

Kabir also inspired Ahmed to major in economics-a field he studied at the University of Dhaka.

When she met Kabir, she thought: "You only have to study economics to have that kind of career!" But soon after she started economics classes at school, Ahmed began to see how the field helped her understand issues such as: "Why is there a slum? Why do they live the way they live and why do we live in an apartment building? These things intrigued me, and this is why I really wanted to explore my questions by studying economics."

Her mentor was also instrumental in Ahmed's college trajectory. Kabir wrote: "I tried to inspire her to focus on world issues that require a global response and encouraged her to secure higher education abroad to get exposure."

From Dhaka to Walla Walla

"I always wanted to get a U.S. education," Ahmed recalled. "It was kind of a dream-something as a child that I really wanted."

But she and her parents-a housewife and a corporate affairs manager at Nestlé-faced a hurdle: the significant financial aid they would need. After high school, Ahmed took a year off to research and apply to colleges in the United States.

When she opened Whitman's letter, "it was really like a dream come true," said Ahmed, who learned that she had received a full scholarship.
Coming to Walla Walla from Dhaka-a metropolitan area with a population of more than 18 million-involved a fair share of culture shock for Ahmed-"you could actually walk through the streets and not see a lot of people"-but she soon settled in.

"With academics, you really forget," she said. "You have your friends and you have the library to work in; you are really challenged; and you have all these activities. You see it from a very different perspective than how you see it in the first few months."

Whitman's Friendship Family program, which pairs international students with local families to support students during their time in Walla Walla, also eased the transition. Former Walla Walla City Manager Duane Cole and his wife, Maryann, a retired higher education administrator, invited Ahmed into their household during semester breaks, hosted her parents for Commencement and spent time with her throughout all four years.

"It was our great pleasure to have Maherin in our home and with us on adventures numerous times during her tenure at Whitman," said Maryann.

The couple appreciated Ahmed's intellect and talent, and her enthusiasm for new experiences-including snow.

"Cold weather was completely new for her," said Maryann. "The first snow in Walla Walla after her arrival came about 7 a.m. one morning. We called and woke her up to tell her to look out the window of her residence hall. She was amazed. It was not long after that we took her to the mountains to wander through lots of snow."

The Coles stay in contact with Ahmed and hope to meet up to discuss "what she and others her age plan to do with the world," added Maryann. "They are the light on the horizon of leadership-just waiting to shine."

Ahmed went on to work in the Office of Admission, take part in the International Students and Friends student club and serve as a resident assistant for the Global Awareness House and the Asian Studies House, which "really taught me to be in a leadership role," she noted.

Appreciative of such positive memories, Ahmed recently started giving back to Whitman, hoping to help future students in need of financial support.

"I am so thankful and grateful for the experience I got, and I realize if I didn't have that opportunity, I probably would have missed out on a lot of experiences that I'm having now," she said. "It is definitely a college that has changed my life in a lot of ways."