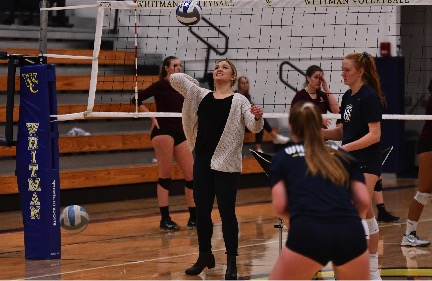 "One of the benefits of having an assistant coach is receiving more one-on-one coaching," said Jenna Gilbert '18, a member of the women's tennis team at Whitman College, praising the new Assistant Coaches Initiative. "By making notes of important statistics while our head coach runs certain drills," continued the biology major, "we can see areas we need to improve on."

Noah Cavanaugh '18, a defensive player and co-captain on the men's soccer team, appreciates having an intermediary. "It's much more comfortable for me to share certain things with an assistant coach than to go up to the head coach," said the psychology major. Assistant coaches "add dimension, add character and add multiple ways of communicating."

Whitman Athletics recently received gifts to significantly enhance paid part-time assistant coach positions in eight varsity sports through 2021, thanks to a partnership with the W Club, which supports Blues sports. Before this undertaking, limited budget dollars resulted in minimal part-time hires and hours for these positions. The Assistant Coaches Initiative fills in most of these gaps without burdening the college's bottom line. "Our goal is that every student athlete in our program has an equitably outstanding experience," said Athletics Director Dean Snider. "This initiative builds equity by ensuring that all of our student athletes have access to assistant coaches." 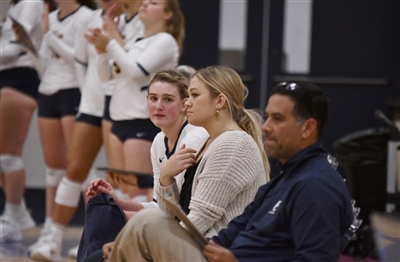 Whitman seeks permanent funding for these positions, said John Bogley '85, vice president for development and alumni relations. "The W Club has made this a priority," he said, "and will be reaching out to friends of Whitman varsity athletics interested in making gifts to an endowment fund that will allow these positions to be supporting student athletes in perpetuity."

Because volleyball is a position sport, Helm breaks players into groups during practices. Stewart oversees defense and Helm setters and hitters, he explained. "We're getting multiple reps with our players," he said, "and they're getting specific feedback for their position, which is really helpful in building our players' volleyball IQ and skill set."

New Assistant Women's Tennis Coach Brian Elliott agreed. "It's important to have other coaches on court for players because there are more eyes analyzing things and finding ways to improve the team," he said.