Astronomy Professor, plus other Whitties, Take Measure of Eclipse

When a total solar eclipse cast shadows across the contiguous United States last summer, Associate Professor of Astronomy Nathaniel Paust '98 took advantage of the rare cosmic event to conduct research. He and his Louis B. Perry Summer Research student, astronomy and physics major Lucas Napolitano '18, studied the appearance of the sun's outer layers and collected data from their vantage point in John Day, Oregon. "The moment when totality hit was a surreal experience," Paust said.

Napolitano added, "Having the opportunity not only to see a total eclipse but also to prepare a full observation plan, including how to monitor temperature and pressure data, as well as camera exposure specifics, was truly a once in a lifetime experience." 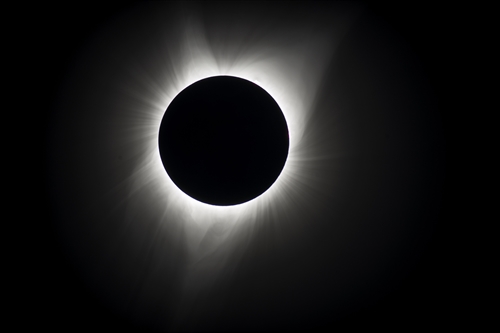 Accompanying them on their scientific expedition were Paust's wife Kirsten Johnson Paust '98 and their two daughters, along with former NASA astronaut Dottie Metcalf-Lindenburger '97, her husband Jason '99 and their daughter, among others.

Back at Whitman, a large group assembled on Ankeny Field to view the 96 percent eclipse through solar-safe telescopes; theatre major Lud Brito '18 also led a group of international students on an outing to Sacajawea State Park in Pasco, Washington.