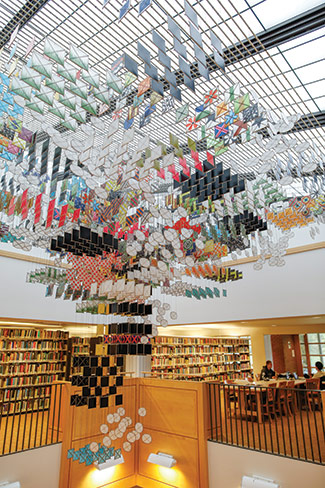 A new permanent installation by artist Jacob Hashimoto has found a home in the atrium of Penrose Library. When Nothing Ends, Nothing Remains was acquired with the Gaiser Art Endowment, after a unanimous vote by Whitman’s Art Advisory Committee, and installed last semester.

Hashimoto’s work has been shown in galleries throughout the United States and around the world and draws on the Japanese art of kite making.

“The combination of Hashimoto’s ‘kites’ as sculptural elements, along with their vibrant colors and graphics, results in the transformation of space into something that is simultaneously atmospheric and architectural,” said Sheehan Gallery Director Daniel Forbes.

Hashimoto’s work replaced Travel On, a canoe sculpture by Robby Thompson ’02, which was reinstalled in the Sherwood Athletic Center.

Although he now lives and maintains a studio in New York, Hashimoto also has a local connection: He moved to Walla Walla after third grade, and his father, Irvin Hashimoto, was associate professor of English at the college. The town has “always been home to me. I’m really flattered and excited to bring my work back to Walla Walla,” he said.

“It has been a great experience working with the college that looked after my family for so many years. My great hope is that the artwork that I leave behind at Penrose will be well-received by the whole community.”

Chloe Casey ’18—a race and ethnic studies major from Los Angeles—was one of six students who helped install Hashimoto’s work.

“It was great to be able to work alongside Jacob and his team,” Casey said. “I think the use of art on campus is important and inspiring. The piece in the library has changed the way I view the space completely—I am much more aware of the scale of the building and the wonderful amount of natural light that it has.”

Art major Mercer Hanau ’18, who also assisted with the installation, said: “Being part of such a large-scale project gave me a sense of community and hope that, as an art major, I can take on more ambitious projects in my future, since I know that through teamwork, breathtaking artistic visions can be fulfilled.”