At Lincoln High School, many teens have experienced times without clean clothes, with no food or in the shadow of substance abuse. For Whitman alumni and students working with them, those odds are personal.

Lincoln High School's mascot is the phoenix. It's a fitting emblem for Walla Walla's only alternative school, often considered the last resort for students on the brink of dropping out or being expelled. Most have a history of behavioral issues, truancy and substance abuse; almost all come from disadvantaged backgrounds.

"Walla Walla is sort of like a desert when it comes to the abundance of healthcare available for low-income kids and teens," said Arika Wieneke '15, who served as a Whitman Community Fellow at Lincoln during her senior year.

This became especially evident in 2008, when Dr. Alison Kirby offered free physicals to Lincoln basketball players and found that none of them had seen a doctor since kindergarten. So she teamed up with local nonprofit expert Holly Howard and, the following year, they launched The Health Center at Lincoln, a facility providing primary care and counseling to students a stone's throw from campus. Since then, more than a dozen Whitman students and alumni like Wieneke have partnered with the now nationally recognized clinic, as volunteers, interns, community fellows and AmeriCorps members.

"One of the reasons why we continue to have Whitties volunteer is because they can see the impact they make in the lives of our students," said Katherine Boehm, director of clinic operations at The Health Center. "Their experience here is raw and real—our kids don't sugarcoat what their lives are like, and we don't sugarcoat our volunteers' experience either."

Sara Wade '10 joined AmeriCorps after graduating from Whitman, and spent a year working with students at the clinic and in the classroom. Her job was to connect them with much-needed medical and mental healthcare, and to help doctors and nurses with intake and referrals.

"Working with teenagers can be one of the most challenging and frustrating things in itself… they are learning to be adults and making lots of mistakes along the way," she said. "It was frustrating to watch these mistakes when they would happen. You end up caring a lot about each of the students when you see them every day, and it was always hard when you had to watch them going through tough times."

One such student, a boy named Brendon who was taken from his abusive, drug-addicted mom and put into a series of foster homes, summed it up in a video for The Health Center's website, produced by local filmmaker Sarah Koenigsberg '02: "I really didn't care about the future. I was just mad about the present.”

Brendon's comments are consistent with a mentality that trauma-informed teaching urges educators and healthcare professionals to be mindful of when intervening with troubled teens.

"A lot of the students I met went through things that I couldn't imagine," said Wade, who is now a physician assistant at the Swedish Neuroscience Institute in Seattle. "I was very inspired by their strength and resilience. It surprised me to hear about the tragic events in their past, or learn about what they were currently dealing with— and then see them still show up at school and engage in their work and laugh and hang out with their friends."

Former principal Jim Sporleder introduced the first of several key changes at Lincoln after learning the science behind how a rough childhood affects the developing mind. Now, rather than rushing to suspend students who are acting out in class—the de facto punishment for decades—the school takes pains to recognize that, as Sporleder points out, stressed brains can't learn. 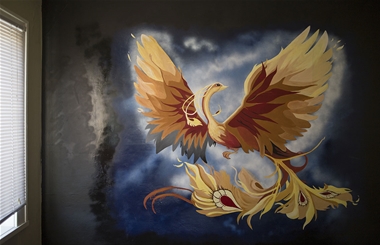 It was that same thinking that led Lincoln to massively overhaul its disciplinary system in 2010, reducing its suspension rate by 85 percent. The results are encouraging. Within the first three years, the number of fights breaking out on campus dropped by 75 percent, and the graduation rate shot to 69.7 percent, up from a dismal 13.4 percent in 2008. Lincoln has since become a model for treating at-risk students who might otherwise fall through the cracks.

"I was amazed at how open and engaged the students were," said Sammi Clute '17, who sat in on a week of sessions with them as part of her summer internship. "That setting seemed to really provide the structure for students to do some self-reflecting and figure out what the sources of some of their issues were, which definitely had an effect on their academic success. Walking around Lincoln, there was an overwhelmingly positive response that I got from those students about just having access to [services] like that."

Much of Lincoln's success with trauma-informed teaching can be attributed to its embrace of research conducted in the mid-1990s by the Centers for Disease Control and Kaiser Permanente. The Adverse Childhood Experiences (ACEs) Study, one of the largest-ever epidemiological assessments of toxic stress, links 10 types of childhood traumas with negative health outcomes later in life, such as mental illness or chronic disease. An ACE score of six or higher correlates to a life expectancy about 20 years lower than that of a control group with scores of zero or one. The average ACE score among Lincoln students is between 4.5 and 5.

"Having a definitive score evaluating how disadvantaged these kids were allowed providers to have more insight into their lives, to get on their level and really communicate bluntly about some of these issues in ways I think they wouldn't otherwise be able to," Clute said. "I saw a lot of really direct communication, making sure the kids knew that it was okay that they were struggling and that they had a safe place to talk… I think that awareness really helped providers connect on an individual level with the students."

Lincoln still faces some startling statistics: 60 percent of its student body reports feeling abandoned by a parent. Sixty-five percent of them have an immediate family member in jail. A majority have lived with substance abuse, and almost one in three have witnessed their mother being physically assaulted at home. Upwards of 80 percent have lost a loved one; more than half have contemplated suicide.

If the numbers seem overwhelming, just imagine being one of those students or an adult authority figure trying to reach them.

"I learned a lot about myself," said Tessa Matson '12, who spent two years with AmeriCorps and helped open a second clinic location at Blue Ridge Elementary, the primary school with the highest rate of absences in the district. "I learned my breaking point, but I've also learned how to keep cool in moments of crisis."

She is currently pursuing a master's in public health at the University of Washington, with a focus on how trauma and stress impact chronic health conditions.

They had fallen into coping mechanisms like drinking and smoking because, the film contends, "exposure to chronic and adverse stress leaves a child in a fruitless search for comfort and escape from a brain and body that is permanently stuck in flight or fight—in other words, being unable to tell the difference between a real tiger and a paper tiger."

Redford's documentary screened at the Seattle International Film Festival and other venues across the country, garnering critical acclaim and a touch of fame for Walla Walla. In December, Cordiner Hall was packed to capacity for the hometown screening.

"It was a fun opportunity for those kids to tell their story, and for the staff at Lincoln to get such well-deserved recognition for everything they do," said Wade.

Clute, who is working at The Health Center again this semester, echoed her praise.

"Every staff member at The Health Center knows every student at Lincoln. Sometimes they see these kids two or three times a month, and then they also make efforts to go to their basketball games and share the support that they're not getting from their home environments. They really are these kids' cheerleaders."

For Wade, it's the memory of Lincoln’s unique graduation ceremony, which fell toward the end of her AmeriCorps service, that sticks with her.

"The staff plans such a fun and moving ceremony for the kids. When each student comes up to accept their diploma, a staff member speaks about them to the crowd—telling a funny story, talking about what makes them great, and wishing them luck in their future endeavors. It's a time to reflect on how far each of them has come to stand on the stage."

Maybe the defining metaphor for Lincoln students isn't a fear of paper tigers after all, but rather their ability, with the support of the community behind them, to rise phoenix-like from the ashes.