Living on the Green Side: Part I 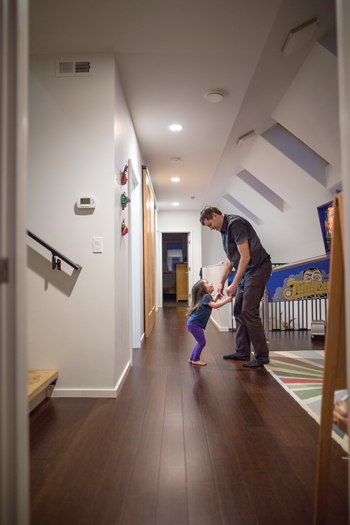 The family that calls this house a home includes Sloan Ritchie ’93, who is also the founder of Cascade Built, the company responsible for its construction.

“I had become interested in sustainable design and construction before I was aware at all of passive houses,” Ritchie said. But within his first couple of years in real estate development, he had stumbled across the idea of creating passive homes.

The formula for energy-saving passive houses was created in 1988 by Wolfgang Feist of the Institut für Wohnen und Umwelt (Institute for Housing and the Environment in Darmstadt, Germany) and Bo Adamson of Lund University in Sweden. The first passive homes—a series of four townhouses—were built in Darmstadt in 1990.

In the mid-2000s, Ritchie was considering how the passive model could apply to Seattle.

“A lot of the green building strategies that people were doing seemed like tiny incremental things that didn’t have very much of an impact,” he said.

Instead, he wanted to explore the idea of passive houses as part of the “long-term impact of construction on the environment—be that resource consumption, energy, global warming.”

When building a passive house, he added, “it’s almost ridiculous to talk about the embodied energy of the tile that you shipped from wherever” in comparison to creating a code-standard home that has a “big old furnace” likely to run for another 50 years or more.

The concept seemed like “a huge opportunity and something that everybody else was missing.” 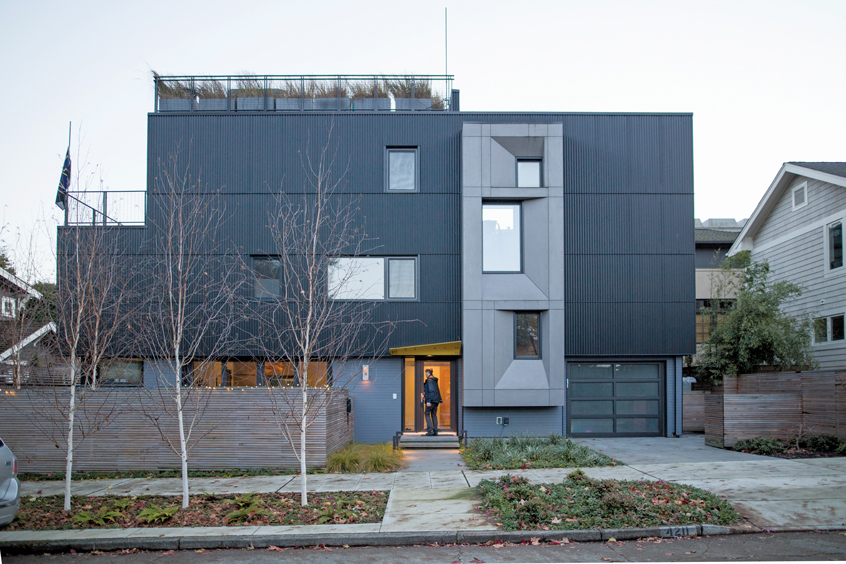 Park Passive, the Ritchies’ Seattle home, is airy and light. Reclaimed ash wood that stood on the property now clads the staircases and windowsills. A bioethanol fireplace, a roof deck and a yoga room were all part of the construction from the start. Designed in collaboration with NK Architects, the 2,700-square-foot home has been certified by the American Passive House Academy and the Passivhaus Institut—the international body founded in 1996 by Wolfgang Feist.

While its clean, modern look gives a sense of its high-end construction, it is the invisible, the barely visible and the unassuming that truly make it a passive house.

A major one is airtightness—the envelope of a passive building is around 10 times more airtight than one built to typical city codes, and its walls can be up to two feet thick—“so you’re not losing heat just through having drafty, leaky walls.”

A second vital element for passive construction is the quality of windows and wall insulation: “Better walls and windows—and by better, I mean way, way, way better,” Ritchie said.

(Park Passive’s walls are insulated with 16 inches of fiberglass, and the windows and skylights—the latter transported from Poland—are triple-glazed monsters so heavy that they needed to be craned into place.)

The third is that passive houses do not have standard heating, ventilation or air conditioning systems. Instead, they use heat recovery ventilators, which send stale indoor air outside and use the energy of that process to heat outdoor air that is coming into the house. Other factors contribute to efficient energy flow: south-facing windows trap solar energy; the heat from appliances like clothes dryers is held inside the buildings; and summer temperatures are regulated by opening and closing windows, doors and blinds.

“Your systems—your lighting, your appliances, any of the HVAC mechanical systems—have to all be pretty efficient. Best of breed,” Ritchie said. His home is a comfortable 72 Fahrenheit or so, year round, and for the most part, the only signs of the heat recovery system are small, round ceiling vents that resemble recessed lights or unusually chic fire alarms.

While Ritchie estimates that building a passive house costs around five to 10 percent more than building a standard home, “in the medium term, you can recoup those costs.” But he is quick to point out that “it would be difficult to rely only on the energy and utility savings to justify the expense,” and that there are more compelling reasons to reduce your residential energy footprint than simply saving dollars on your gas bill.

It can be expensive to go through the official passive house certification process.

Park Passive, the Ritchies' Seattle home, is airy and light. While its clean, modern look gives a sense of its high-end construction, it is the invisible, the barely visible and the unassuming that truly make it a passive house.

While there are around 30,000 of these homes in Europe—primarily in Germany and Scandinavia—Ritchie said that there are only two certified ones in Seattle. The second? Also a Cascade Built project.

View Haus 5, designed by b9 Architects, is a three-story row of five townhouses, each with views of the Cascade Mountains, each with a unique design (layout matters when you’re collecting the sun’s energy). Just a five-minute drive from Park Passive, the building’s modular design and reclaimed barn wood fascia would sit comfortably next to Ritchie’s home, but again, the inner workings of the construction are what make it truly unconventional.

The majority of the certification cost is in getting the build right, according to Ritchie, but you also have to do energy modeling and pay for the relevant third parties to inspect the work.

“If you’re being held to that standard, you’re unlikely, during construction, to say: well, let’s dial this back a bit or change something. You’re pretty much sticking to [your plan.]”

The value, he said, is not just in the certificate on the wall, but in the processes and inspections that keep the contractor and the future homeowners on an eco-friendly track.

Whether certified or not, Ritchie nonetheless sees green building as part of a long-term plan.

“We’re all part of the environment. If we don’t take care of it, we’re in deep trouble,” he said. And since most people don’t think about housing and construction in those environmental terms, he wants to be sure that there is someone out there who does.

“I can live my own life in certain ways and have a very small impact on the environment generally, or I can do something—build things, and create homes for other people that maybe they wouldn’t otherwise have the opportunity to have—and have a bigger impact.”

About 10 years ago, Ritchie made a career switch from wireless engineer to real estate developer—two fields that don’t, at first glance, seem closely connected.

But then again, in 1993, he was a Whitman graduate with a sociology degree under his belt and “no business being in engineering. But I was able to ask the right questions and pick it up and manage projects, and I think that same thing applies to construction.”

Sociology became Ritchie’s major simply because, to him, it was “fascinating.” His father, a physician, asked him what he planned to do with his degree, and Ritchie—who didn’t really know—brought his dad a document from the sociology department listing “careers that sociology majors have, and it was A to Z. It was everything.

“If I’d gone to construction school, then I’d have a much different perspective,” he added. But questions that might normally be found in classroom discussions, like “why are we doing it this way instead of a different way? Is there some way we can do this any better?” have, since then, become the questions that Ritchie has applied to his work.

He still likes “that analytical way of looking at the world... Ferreting out what’s real and what’s not.”

This analytical approach is important if you call Cascade Built and talk to Ritchie about building your own passive home.

His firm takes on a lot of the “preconstruction services:” getting permits, working with architects at the design stage, ensuring you’re on budget and helping determine the strategies to meet your passive living goals.

Durability is also important, and the projects that his team works on are intended to last for a long time, from the non-toxic finishes to the sustainable energy mechanics.

Some building suppliers are getting used to the idea of passive houses, and Ritchie has noticed “some specialty suppliers that have cropped up to meet the need—people who focus on those kinds of products, materials and so forth.”

In part, this is because the notion of passive living has been slowly gaining traction in the U.S.

While Washington and Oregon are prime locations because of their relatively mild climates, passive house standards are feasible almost anywhere—provided you adapt them for your climate.

In New York City, for example, a green building initiative by Mayor Bill de Blasio aims to reduce greenhouse gas emissions by 80 percent before 2050. Since buildings account for more than 70 percent of energy emissions in the city, passive homes are becoming part of the larger solution that Ritchie mentioned. 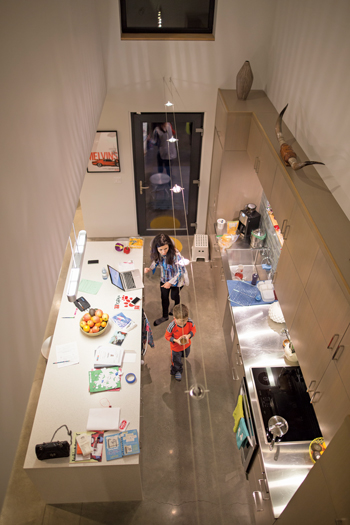 Which means that, although Cascade Built works primarily on new construction, refitting older Seattle homes is also not out of the question in the future.

On the second floor of Park Passive, one side of the ceiling slants downward and light—such that there is on a typically cloudy Seattle day—falls through Ritchie’s imported skylights. Next to an incongruous pinball machine, an opening looks down on the kitchen on the first floor below.

Will these newly green living spaces encourage more sustainable living if they come back to the market in 10, 15, 20 years?

“I hope that people recognize the value of it, and they say: Wow, your utility bills are extremely low, and it’s very comfortable to be in this house. So it’s a better product and we’re going to pay more money for that.”

But one thing is sure: the American market is still relatively new to this kind of alternative living, and homeowners looking to deal with the problem of residential energy use will need help from trailblazers like Ritchie.

“If a really good designer or constructor can solve a problem for people, then that’s really their place,” he said.

When asked whether he considers himself successful, he pauses for a moment.

Well, a business has to be “financially viable, because if it isn’t then it’s not repeatable and it has a lot less meaning to the greater community.”

But he sees success as something a little more.

“Doing something that has a very significant impact on the environment, something that really is way beyond what anybody else is doing, but can be done within the typical economic constraints of any other project that’s out there—that to me would be success. I think that we can do more. We can do better.”