When working with lasers, movement on a tiny scale is a big deal, according to Assistant Professor of Physics Greg Ogin.

Whitman Magazine: I think of your work as "playing with lasers." How would you describe it to someone who hasn't taken a physics class in about 15 years?

Greg Ogin: The focus of my research is lasers and optics. I really think of it as precision measurement—this question of how can I see if the mirror moved 10-12 meters and can I better understand why? The thing that gets me interested in it is: you're talking about something absurdly small—10-12 meters is absurdly small, a fraction the size of an atom! Atoms are 10-10 meters across, so in my lab we’re looking for motion of a mirror surface by one hundredth of an atom. It's absurd. And amazing. It still gives me goose bumps to think that we can actually measure something that small.

WM: And you're working on how best to measure those movements?

GO: Right. In the course of studying the materials involved, I'm going to claim that my mirror surface moved by 10-12 meters due to some minute heating effect. How am I so sure of that? There's no physical way for your eyeballs to do this. The only way you can do this is with really fancy electronics that detect light, and then you have to know stuff about how that works and how the electrons get generated, sent down wires, and all of your computers that measure the electrons and process the data. The thing that interests me is: how do you convince yourself that you're right, although all you're really seeing are some numbers on a computer screen bouncing up and down that came from some electronics that came from a photo diode that came from a gigantic laser beam?

WM: "How do you know that you know?" seems like a very liberal arts and sciences question.

GO: It ties into something that people at liberal arts colleges should be asking. The sun is 93 million miles away. How do we know this? Nobody's walked there. How confident should we be that we know this? The answer is: very, very confident. The techniques for doing it are fascinating and often non-intuitive. Understanding the processes and trying to figure out: how can I do this and what does it take to measure this, what does it take to know these values?

WM: You also teach Quantum Mechanics with Professor Mark Beck. What does that teach Whitman students?

GO: Quantum mechanics is the science of the very small, the very fast, the very isolated. If you want quantum effects, you have to be really, really clever about isolating stuff. Mark Beck is that clever, and quantum optics is his field. It teaches students the rules of quantum mechanics, which is a model of how the universe works that is one of the most successful models ever. Once you get down to teeny tiny little transistors and microprocessors and semi-conductors in general, you can't understand how they work unless you do quantum mechanics. Newtonian stuff just gets you absurdly wrong answers. It turns out quantum mechanics is very fundamental to just about anything. 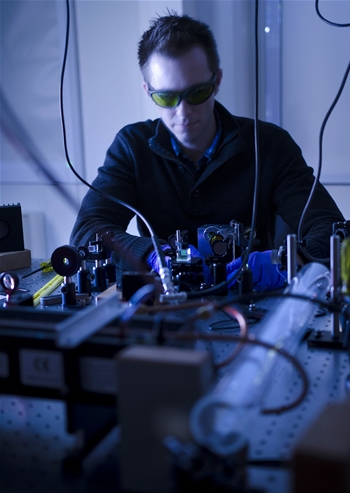 WM: Why should an English or sociology major take one of your classes?

GO: I would say what you get out of it is a big logical and quantitative thinking component. If I throw the ball across the room and I want to know how far it’s going to go, how long it’s going to take to hit the ground, you can be wishy-washy, or you can get serious. Its position is a function of time. I've got good theoretical reasons to motivate specific functions, and I expect gravity to behave in exactly this way mathematically. Modeling is a big part of it. The ability to look at the world and say: I know some math, I think that this particular math will be able to predict that phenomenon, or predict what will happen in this situation, and then check and refine your predictions. Making that connection is sort of what physics is all about.

WM: In your Energy and the Environment class, you get a lot of non-science majors. What's an example of how you approach that differently?

GO: If you take my Energy and the Environment class, estimation skills are something I aim for. They're really valuable and much easier than people think, and yet people tend to be scared of it because there's lots of ambiguity. In one of my past exams, I had students estimate the amount of carbon dioxide that was being put in the atmosphere by all of the cars in Los Angeles. So that sounds like a daunting task: how many cars are in Los Angeles? I don't know that number, so how can I get a right answer? But that's not what estimating is about. Estimating is about getting it right to within a factor of 10.

WM: And that teaches them a new way of evaluating a problem.

GO: You can get a feel for how big the numbers actually are, and how they relate to each other. There's a lot of information there, you just have to not be scared to take reasonable guesses at numbers. For the English majors who want to take a class like Energy and the Environment, I would say come over… You'll get a better feel for how big are numbers, what's important, how do I make estimations. As well as a physicist’s look at some of the most important problems we'll be facing as a society.

WM: How does your work with the LIGO Project at Hanford, which aims to detect gravitational waves, relate to your research?

GO: The [LIGO] project has been going on for something like 20 years, and it's the biggest project the NSF has ever been the sole funder of. LIGO has two mirrors that are two and a half miles apart and they're watching for those mirrors to move by 10-19 meters… If and when LIGO detects gravitational waves, it'll be because we saw a couple of 40-kilogram mirrors move 10-19 meters. And despite its size, it has all sorts of interesting projects and areas of research. I can do work processing data from the big interferometers, chasing down insanely small bugs, or I can do work that will be me and a handful of students at a small lab at a small school, while still being part of this huge exciting project which turned on after a major upgrade just this past September.

WM: A lot of Whitman undergrads go to grad school. Do you think physics majors should?

GO: I think my answer to that question would be: if you want to do physics, yes. That said, one of the pitches that we make to physics majors is that these skills that we were talking about earlier—the estimation skills, the ability to handle sophisticated math and the ability to apply that math to real situations—those are skills that are in demand for all sorts of jobs. These are a little non-traditional for a physicist, but if you can say: I've worked with lasers and I've worked with spectrum analyzers, then, okay, you can probably handle this job, you're probably technically savvy enough to handle learning the technology you need to learn. If you want to do physics, the Ph.D. is almost required. But there's a huge set of physics students who don't need grad school, and that's the set who took physics because it's fun, and now they want to go out and do something else fun and exciting.

WM: My sources tell me you play Magic: The Gathering. Does it help to be a physics professor?

GO: I feel like it helps a little bit, but not as much as I would like it to! [But] it does feel like I’m analyzing a situation and I need to analyze the consequences of what all the dominoes falling might be. There is definitely an element of that!

Assistant Professor of Physics Greg Ogin, who has worked with LIGO project since 2006, explains the discovery.

Read about the discovery