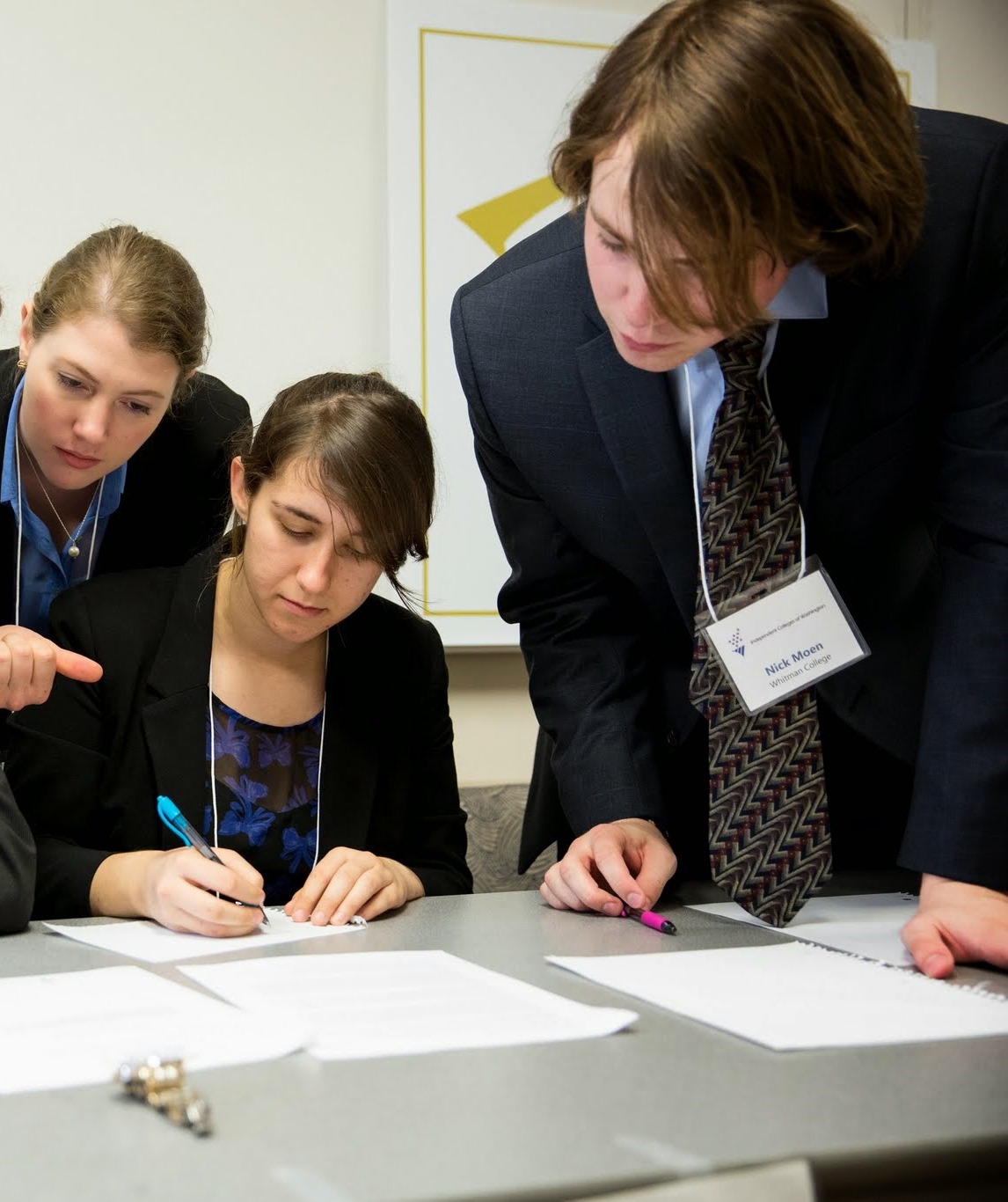 Six Whitman students have won top honors after competing for the first time in the Northwest Regional Ethics Bowl at Seattle Pacific University in November.

"We had no idea we would do so well, but our preparation time, enthusiasm and strong teamwork paid off," said Sheppard (pictured, left), who is majoring in philosophy and psychology. "I became involved in Ethics Bowl as I was discovering my excitement about philosophy and exploring its applications, and it continues to be a great way for me to sharpen my speaking skills and ability to think on my toes."

The Intercollegiate Ethics Bowl is an annual competition organized by the Association for Practical and Professional Ethics and is intended to give students the opportunity to defend pressing moral arguments on some of the most complex ethical issues of the day. Hundreds of students from across the U.S. and Canada tackled topics ranging from the purchasing of pre-Islamic artifacts from ISIS-controlled areas to whether parents should be taxed for not vaccinating their children. The Whitman team faced off against delegations from universities such as Whitworth, Gonzaga and St. Martin's.

"Our team worked very hard all semester long analyzing cases and developing the knowledge, skill and team spirit that brought them to victory," said Patrick Frierson, associate professor of philosophy and Garrett Fellow in the Humanities. "I honestly cannot express how proud I am of the work that this group of students did this semester, and how delighted I am at the way this work bore fruit."

Frierson first assembled a group of Whitman students last year to participate in a smaller ethics bowl hosted by the Independent Colleges of Washington. The team decided to compete in this year's northwest regionals as a warm-up for that event, not knowing they would wind up winning first place.

"We did everything we set out to do," said Gray (pictured, center), a philosophy major. "We gave careful consideration to many important and relevant ethical issues, we had engaging and respectful conversations with some amazing teams and we all had so much fun. I didn't realize how emotionally invested I was in the competition until it became clear that we had a serious chance of winning."

She said the team started out meeting one hour per week to prepare, but by the final weeks leading up to the competition were devoting upwards of six. Her inspiration to join the team stemmed in part from reading Peter Singer's Practical Ethics in a class with Senior Lecturer of Philosophy and General Studies Mitch Clearfield.

"I believe it's crucial to consider the ethical implications of one's actions. I try to practice this as much as possible in my own life, and have even been considering attending graduate school to study ethics more in depth," Gray said. "When Professor Frierson asked me last year if I wanted to join the team, it seemed like a perfect experience to fit my interests and future goals. There are few extracurricular activities that focus on applied ethics, but the Ethics Bowl is definitely one of them. It has been an awesome learning experience."