Why We Teach the Movement

Whitman Teaches the Movement is now a nationally recognized initiative and a model for colleges across the country. Associate Dean of Students Noah Leavitt explains how WTTM began.

It's hard to believe that a glance through The New York Times would lead to the creation of a national effort to increase civil rights education in America. But that's the way it's been with Whitman Teaches the Movement, now in its fourth year.

In the fall of 2011, Community Service Coordinator Kelsie Butts ’11 and I were thinking about updating the way the college recognized Martin Luther King Day. We were new in our roles and eager to create a meaningful and fresh service component for Whitman’s annual celebration.

I had read a short Times article announcing the release of a report from the Southern Poverty Law Center about the lack of literacy about American civil rights history among public school students across the country. The story described how this low level of knowledge was not accidental but rather the result of states choosing not to include any requirements to teach important components of the national struggle for racial equality.

The report captivated Kelsie and me, as it graded states on an “A” to “F” scale and gave nearly all states “Ds” or “Fs.” Washington was one of the 16 states that did not require any study of the civil rights movement at the elementary or middle school level and was one of the 35 states that received a failing grade for civil rights coverage in educational content standards. Kelsie and I realized that a large majority of Whitman students came from school systems that did not require them to learn about this formative moment in our nation’s story. We also quickly realized that, in the spirit of MLK Day, we had a fantastic opportunity to address this deficiency in our local community.

I reached out to the report’s author, Dr. Kate Shuster in Alabama, to inquire whether she might be interested in speaking about her research. After finding an email address and sending a short note, Kate and I were on the phone a day later. It turned out that Dr. Shuster, a 1996 national debate tournament champion and the author of several books about college debate, was familiar with Whitman. We started talking.

Within five minutes of hanging up Kelsie and I decided not only to invite Dr. Shuster as a speaker for MLK Day but to go one step further and draw on her research to imagine a new volunteer service initiative to remedy some of the deficiencies her report identified. We then contacted Assistant Superintendent of Walla Walla Public Schools Dr. Linda Boggs, with whom we already had a fantastic relationship due to the many school-based service programs that Whitman coordinates.

Over the next couple of weeks, Whitman, the SPLC and WWPS created a model in which we would train Whitman students in various lessons about the civil rights movement that were not required under the Washington state standards. Our students would then work with kids in the Walla Walla public schools to get them talking about what it means to live in a diverse and complex society. Dr. Boggs was particularly excited about this possibility. She regarded these structured discussions about difference, approached through the lessons about the Movement, as helping the district achieve its goal of guiding students in how to interact in classrooms with a high degree of diversity (overall at least 30 percent of the district’s students are Latino, and in most elementary schools that percentage is significantly higher).

In under six weeks, we recruited 100 Whitman students and several dozen teachers in second, fifth, seventh and 11th grade classes. The following month we brought Dr. Shuster to Walla Walla to lead the trainings (as we have done each year since). Then, during the first two weeks of spring semester, we launched 50 Whitman student teams into Walla Walla—during what turned out to be some of the worst weather of the past decade—to teach the Movement.

Since those first snowy days in early 2012, we have provided hundreds of Whitman students with powerful, memorable, and in many cases transformative experiences sharing some of the most dramatic and inspiring moments in our nation’s story with thousands of young people in the Walla Walla school district.

Nearly all are surprised when they find out that many of the key figures of the Movement, as well as so many who fought discrimination outside of the public spotlight, were high school and college students. Perhaps because of this age proximity, our students’ experiences talking and teaching about racial discrimination and courageous grassroots activists resonate long after they complete their volunteer commitments.

We know our model works. We have been invited by the superintendent of the Dayton, Washington, School District to address recent instances of racial and religious intolerance in his community. Some of our partners in the district have presented the project at state and national teacher conferences. Our project has even been featured in The New York Times, Diverse: Issues in Higher Education, The Seattle Times, the Independent Colleges of Washington newsletter, local and regional radio, newspaper and television news outlets, and countless social media posts.

We have also shared our model regionally. In January 2013, as part of the kick-off event, we hosted nearly 20 delegates representing a dozen colleges and universities throughout the Pacific Northwest to learn about the project and consider a version of it in their communities. Since then, we have been in contact with several of those campus leaders who are in the process of launching or developing their own Teaches The Movement with their students, including the University of Washington, Seattle University, Whitworth University and Eastern Washington University.

We are also excited that the SPLC views WTTM as an avenue for helping young people across the country become more skilled at understanding challenges and injustices in the world around them and identifying ways to engage effectively. Over the past two years, the center has created an extraordinary new initiative, SPLC on Campus, to harness what it sees as the next generation of social justice leaders, and WTTM is one of the mechanisms that SPLC invites students to consider creating to accomplish that.

In early December 2014 I had the good fortune to interview SPLC President Richard Cohen. He reflected on Whitman’s initiative, and what it means:

Few of us have the ability to bend history ourselves, but all of us can make a difference, together. Through our collective efforts we can bring down the mightiest walls of oppression.

Since we know that nearly all of our students are coming from “F” states, we recognize that we must continue to provide education about the Movement for them as well as for Walla Walla school kids. Thus, over the past three years the project has organized a variety of unique learning opportunities on campus: Professor Bob Withycombe sharing his research about Birmingham, Alabama, police officers; professors Lisa Uddin, Erin Pahlke and Catherine Veninga examining the semiotic, psychological and geographical relevance of the civil rights movement on Walla Walla today; professor David Schmitz and Director of Athletics Dean Snider talking with Columbia University journalism professor and author Samuel Freedman about the impact of the civil rights movement on black college football players and their coaches. A uniquely memorable aspect of the program has been President Bridges sharing with Whitman student volunteers his own experiences in college when he taught Seattle high school kids about the civil rights movement, and how those experiences served as the foundation for a career examining racial disparities in the criminal justice system in order to make it more equitable.

Indeed, the topic of racial disparities has been on the minds of many on our campus this year, with the recent controversies surrounding Ferguson, Missouri, and Staten Island in New York City, and with racially-structured imbalances in American society on full display. During fall semester, the campus witnessed several large rallies in response to these cases. Many students who have participated in WTTM have been leaders in these efforts, helping give voice to the pain, the anger and the injustice that emanates from these terrible stories from around the country.Watching the students at one of these vigils, where a crowd of about a hundred students, staff and faculty members outside of Penrose maintained four and a half minutes of silence to mark the four and a half hours that Michael Brown’s body lay on the sidewalk before it was picked up, made me think of something SPLC President Richard Cohen told me:

Sometimes the issue seems so complex and so formidable that you don’t know where to start, right? And what happens then is that people don’t do anything. They throw up their hands. I think that really, people can start in a bunch of different places, and the important thing is to do something. Something. Because in the end it is going to be a combination of overlapping efforts that make any change.

I know that WTTM volunteers are among those who are “doing something.” They are bringing our campus together and identifying ways that the lessons of young people half a century ago may have something to teach us today about how we work to resist the injustices around us and struggle creatively and collectively for something better. These students, some of whom appear on the following pages in portraits taken by Annabelle Marcovici ’15, are the ones who can help get us a little closer to Dr. King’s dream of a Beloved Community, in which every human being can live free of prejudice and discrimination.

These students are the new faces of the civil rights movement. 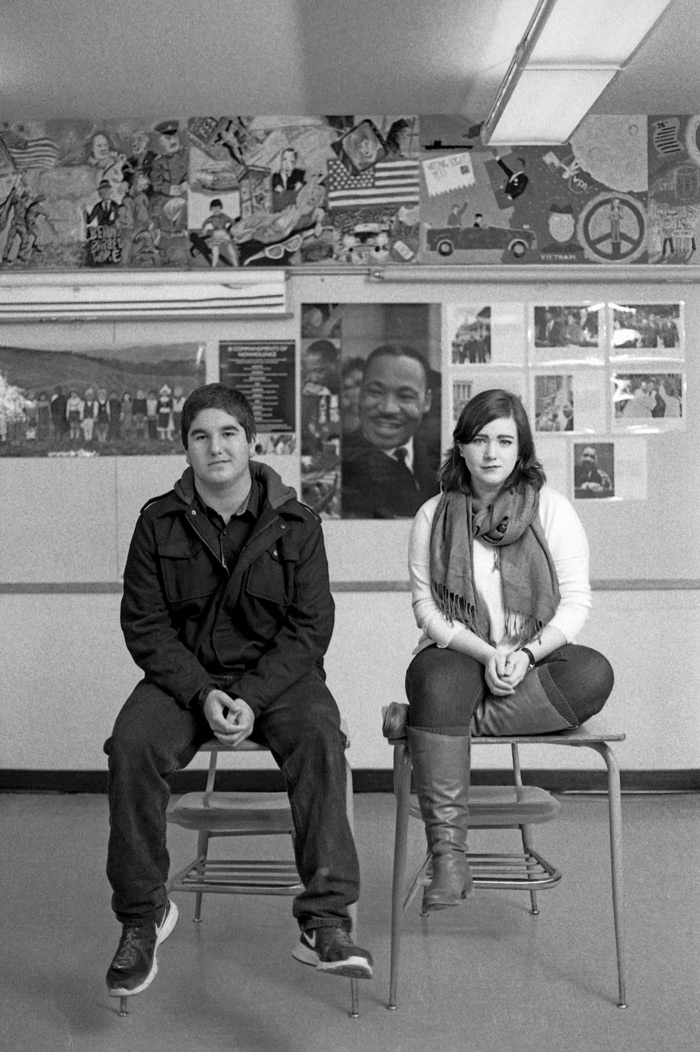 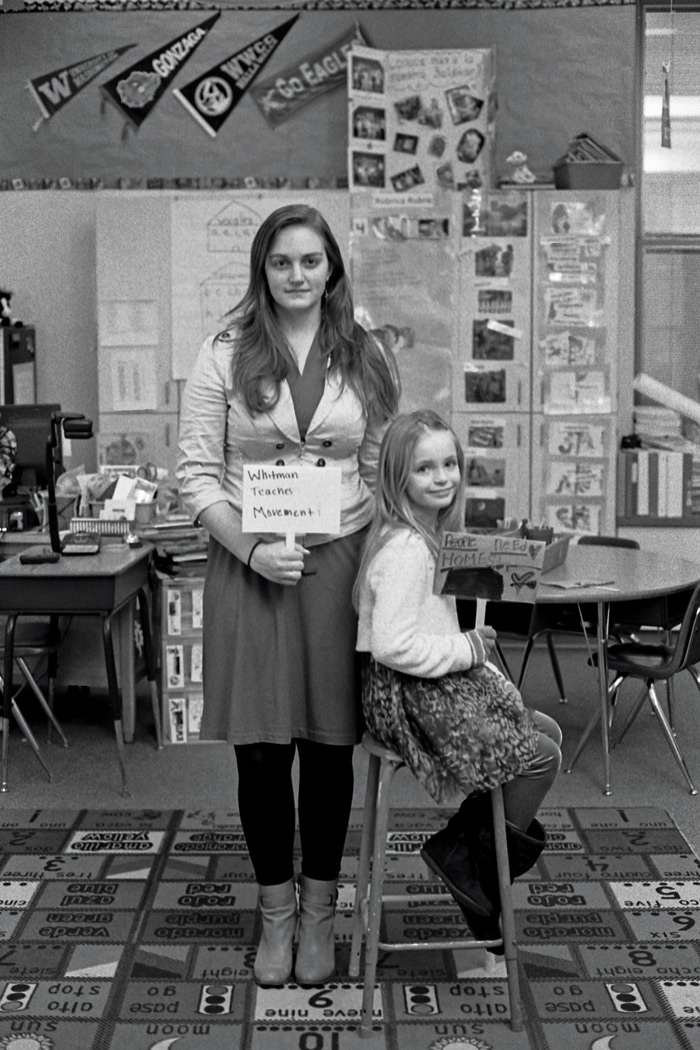 Biology major Claire Logan '15 taught a lesson about the Greensboro sit-ins to Sophie Fraser and her 2nd-grade classmates at Sharpstein Elementary School. 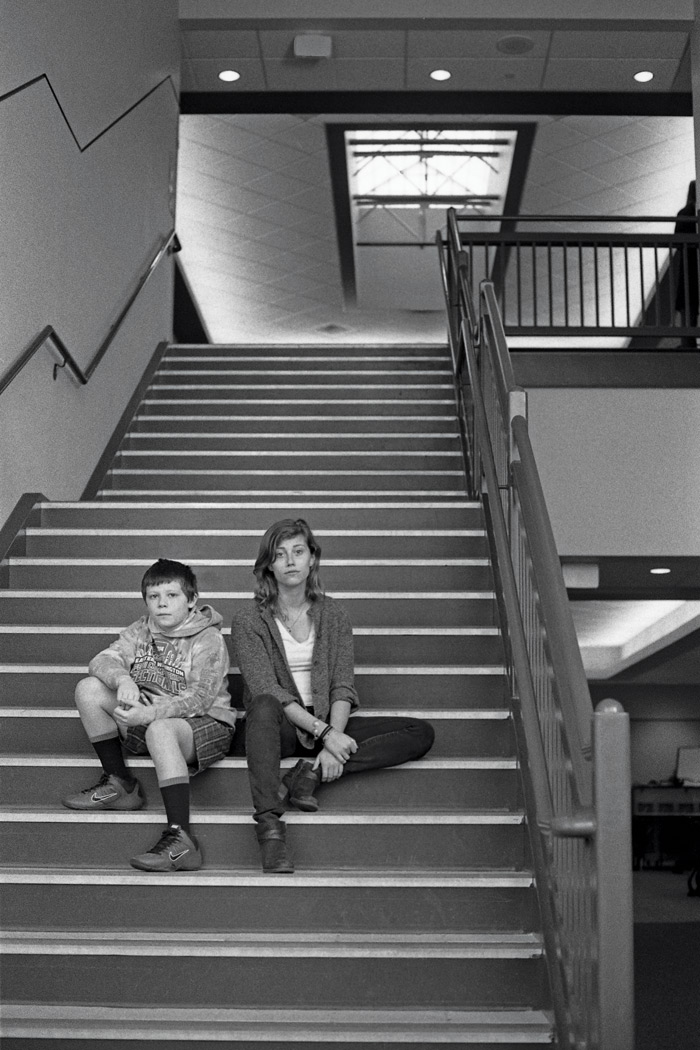 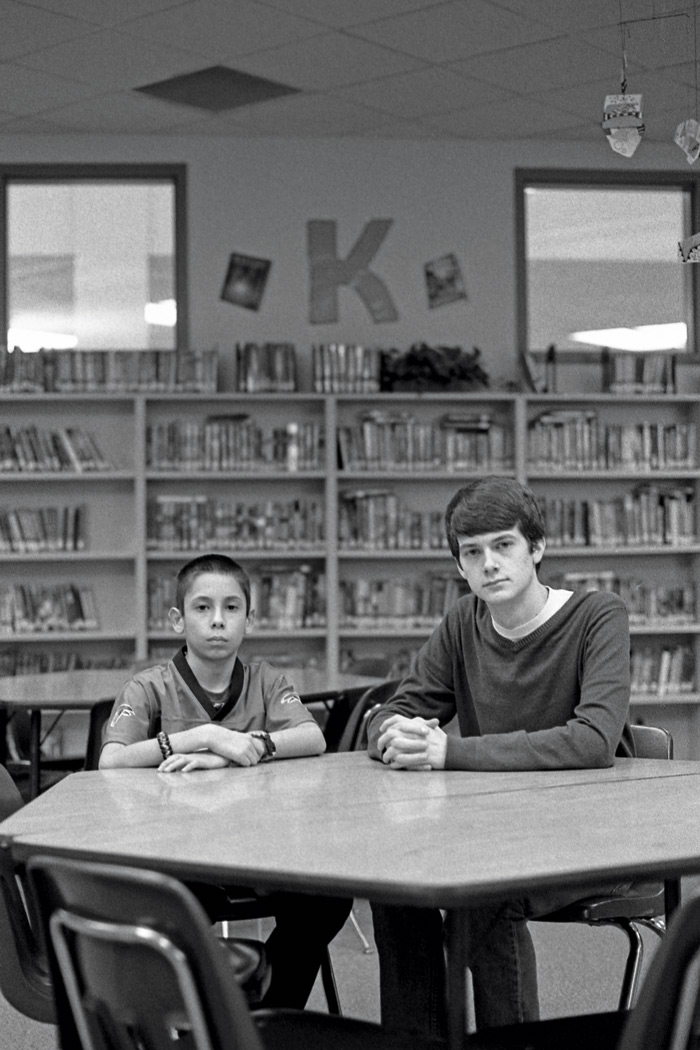 Chris Meabe '18, major undecided, taught a lesson about women in the civil rights movement to Eli Richards and his 7th-grade classmates at Garrison Middle School.