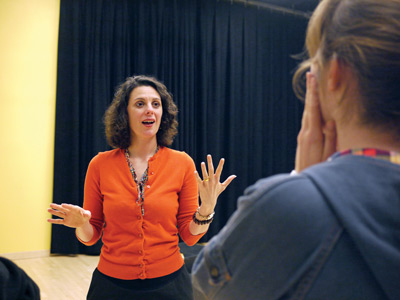 Assistant Professor of Theatre Jessica Cerullo is the managing director of MICHA, the Michael Chekhov Association. She's currently editing a collection of the Oscar-nominated actor's lessons and lectures.

When I prepare to teach an acting class, I often sit quietly and wait for a guiding image to appear. Images are powerful—they contain worlds and help to create a classroom atmosphere of openness and discovery both for me and for the students I teach. Here is the guiding image for a class I taught exploring characters in Sophocles’ Antigone:

“Imagine that you are a flame. Feel the heat. When you open your eyes and engage with the world, illuminate all that surrounds you. This light is you and you are this light. Shake my hand. Tell me your name.”

For actors this is more than a metaphor. It is an activity.

Images, and the ability to incorporate them into one’s body, voice and psychology, are the tools and language of the actor. I learned this lesson with the help of Michael Chekhov, a man who dedicated his talent and abilities not only to actors but also to teachers of acting.

This year I am working with MICHA, the Michael Chekhov Association, to edit and publish a series of lessons and lectures that Chekhov gave between 1936 and 1942. Called one of the great actors of his time, he was the nephew of the author and playwright Anton Chekhov. As a young man, Michael performed, studied and taught at the Moscow Art Theatre where Constantine Stanislavsky proclaimed him his “most brilliant student.” Contrary to acting methods of his time (and ours), Chekhov believed that the actor could work outside of his own psychological and emotional reality. Through the process of engaging with the independent life of an image, the actor’s imagination has the power to take him to a place of pure creativity, free of his own limited experiences and emotions.

Chekhov’s assertions and abilities to transform by employing images caused audiences to flock to his performances and revere him. The Communist regime, however, did not appreciate either his talent or his pedagogical theories. In 1928, he fled his homeland after learning the Kremlin had plans to arrest him. He would later explain, “I was guilty of spreading certain ideas which are not absolutely flat like a table.”

Developing one’s pedagogy necessitates that one has students. And this, unfortunately, was not an easy task for Chekhov. Forced to leave Russia, circumstances later dictated that he leave his students in Berlin and Paris. Fears that he was a Russian spy caused him to leave his students in Lithuania and Latvia. It wasn’t until 1935 when Beatrice Straight (of the prominent Whitney family) invited Chekhov to open a school at Dartington Hall in England, that he could finally establish the Chekhov Theatre Studio. Chekhov quickly learned English, with the help of one of his students, Deirdre Hurst du Prey, and the studio opened a year later to a class of 22 students.

But soon after, England declared war with Germany and the studio relocated to Connecticut. In 1942, the school was forced to disband because it lost its male members to the draft. Eventually, Chekhov moved to Hollywood where he taught a group called the Drama Society. Some of his students included Ingrid Bergman, Marilyn Monroe, Clint Eastwood, Gary Cooper, Yul Brynner, Patricia Neal and many others. During this time Chekhov appeared in a number of films, earning an Oscar nomination for his role in Alfred Hitchcock’s Spellbound.

He recorded a series of lectures and published his book, To The Actor. Copies of the book were sent, at his own expense, to libraries around the country. Despite these successes, his ideas were never widely received.

And yet it was during Chekhov’s years in England and in Connecticut that he was given the most concentrated opportunity to articulate his technique. Du Prey, whom Chekhov affectionately called “The Pencil,” notated nearly 500 of his lessons verbatim. Thousands of pages of her typed notes are housed at the New York Public Library for the Performing Arts. It is from these archives that I will edit a new edition of his Lessons for Teachers, translated into a multi-language volume with an accompanying website featuring practitioners of his acting technique from all over the world.

My own acting teachers studied with Chekhov and it is through them I first learned of this extraordinary man’slife and accomplishments. While working in the archive, I recently came upon a lecture that Chekhov gave on the topic of “Justifying the Actor’s Profession.” I delight in my own discoveries and in the prospect of sharing them with the Chekhov community in this new edition I’m publishing, and with my students at Whitman. As I wade through the thousands of pages of Chekhov’s lectures and lessons, my imagination reveals to me an inspired and heroic teacher, speaking not only to students of his time but to the thousands of students who would follow when the time was right.

From the forthcoming expanded edition of Michael Chekhov’s Lessons for Teachers of his Acting Technique, July 8, 1937:

I was always so unhappy when I heard such indifferent appreciation of the theater, because I felt ashamed for my whole life. It was really something dreadful when I began to feel that I was a person who only amused others who were able to pay for their seats in the theater, in order that they might laugh, or be quiet, or be entertained.

To fight with this lack of appreciation and to justify our profession, we must be heroes. This means that we must open ourselves, and show that we are human beings and artists. Do you want to see my heart? Then I will cry in you, and you will cry in me and with me. And I will laugh with you, and in you. Then it is something—a sort of sacrifice. But without this it is not worthwhile, and, for me, it is really shameful to be an actor.

By all these words I want to say that we must appreciate the feelings more than ever before. You must take this something which I have tried to explain to you, and put it into your being somewhere so that it will grow, if we want to overcome this difficulty, which is a sense of shame before our own feelings. It is natural for everyone to be ashamed or be afraid of showing his feelings, or of being hurt, but we must do this; we must be hurt, because a quiet psychological life is not for an artist. It is possible to live without being hurt, but it is not the way for an artist. I would have nothing to say to my audience because nobody could penetrate into my heart and make disorder there. I must be tortured, because that is my path in life if I am an artist. It means I sacrifice my heart. I must experience this, and then I will be able to say from the stage something against this hurting.