A Face for Radio

Bestselling author and NPR humorist David Sedaris took to the stage in Cordiner Hall this November to share stories and anecdotes about family relationships and saying "yes" when you might otherwise have said "no." 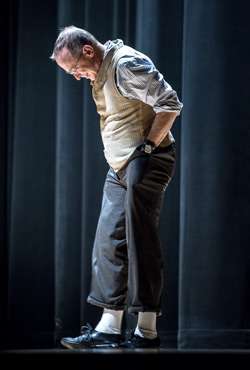 Whitman Magazine: You have a large readership, but a lot of fans know you best from NPR. Are you still doing a lot of radio work?

WM: You write about some pretty outlandish experiences sometimes. Do people ever think you’re making it up?

DS: Somebody came up to me a while ago (it happens quite often) and said [of a story about accepting an offer from a nurse at a book signing to remove stitches from a recent surgery]: “That didn’t happen!” And I said, what do you mean it didn’t happen? She said: “Why doesn’t stuff like that happen to me?” I said, well, I don’t know you that well, but I’m going to guess that you don’t say yes. If you say no, then you don’t have a story to tell. And I tend to say yes. Also, I don’t have a lot of control. I don’t drive a car, so I’m on public transportation or at the mercy of people who want to give me a ride. The less control you have, the more adventurous your life really is.

WM: You often read from your diaries during shows. Can you share a good entry with us?

DS: April 29, 2014. I told Hugh yesterday that when I die, I want my body taken to an ice creamatorium. There, I would like a traditional sundae service.

WM: You always recommend a book at your lectures too. What is it this time?

DS: It’s by Ann Patchett and it’s called This is the Story of a Happy Marriage. This is her first essay collection. There’s an essay in here called “Love Sustained,” and it’s the most beautiful essay about love that I’ve ever read. I cry every time I read it. I think if you weren’t a writer, you would maybe stop crying after five or 10 times, but I cry because I pretend that I wrote it. And then I cry because I’ll never write as well as Ann Patchett does.

WM: You were just on Finding Your Roots, a TV show that traces family history. Did you enjoy the experience?

DS: I don’t like going on television, but I thought this might be good for my dad. What they did is they took some of my DNA and I told them what little I knew about my family, and then they set their researchers on it. They did a Greek show, and it was me and Tina Fey and George Stephanopoulos.

WM: Does writing about your family change the way you think about them?

DS: I wrote a few stories about [YaYa, my grandmother]. She was Greek and she didn’t learn much English. As I get older, I just look at her life so differently. On the one hand as a foreigner—she was a foreigner in our country. As a kid, you’re just embarrassed your grandmother has an accent and your grandmother has hair to her waist, picks dandelion weeDS out of your neighbors’ yard and comes home and cooks them and you’re mortified. She’s exactly the kind of person I would be interested in now.

WM: How about living family members? Are they okay with appearing in your stories all the time?

DS: A lot of times people get the idea that I write things about my family and that I say to them, “Oh, wait till the book comes out, you’ll see then!” That’s never the case. I always give them the story and I ask if there’s anything they want me to change or get rid of. Generally, when the audience laughs and I’m writing about my family, it’s something that [my family] knows is funny. It’s their laugh. I’m not the creep you think I am!