In 2013-14, colleges and universities awarded undergraduate students about $38 billion in institutional grant aid, according to Trends in Student Aid, 2014. Whether they are called grants, scholarships or discounts, these awards reduce both the amount students pay for their education and the revenues institutions have to fund their operations.

Colleges and universities utilize financial aid funds for a variety of purposes. The most important function is supporting students who do not have the ability to pay on their own or with help from their families. On average, private nonprofit colleges and universities dedicate 70 percent of their grant aid to meeting the documented financial need of accepted candidates. Another 20 percent of the subsidies go to students who could afford to pay on their own. The final 10 percent is typically dedicated to athletic aid or to tuition waivers.

While need-based aid is clearly necessary, colleges are regularly asked about the dollars going to students who appear to be able to pay on their own. Could those dollars be better spent on helping students with more limited resources? It's not easy to justify reducing the price for wealthy students if that takes money out of the pockets of others who may not be able to enroll or complete their studies because of lack of funds.

From a social perspective, providing a high quality college education to all who can benefit, regardless of ability to pay, is a priority. Spending scarce funds to influence the college choices of students with many options is much less compelling. But from the perspective of the finances of an individual college, things are not so simple.

Colleges manage their financial aid dollars not only to support ability to pay, but also to fill their classes and to alter the profile of the student body. For example, some more affluent students might be able but not willing to pay the full price. These students tend to apply to many colleges and have access to test prep courses and costly extracurricular activities, making their applications stand out. Many colleges rely on "merit scholarships" to attract these students, who have come to expect these awards. 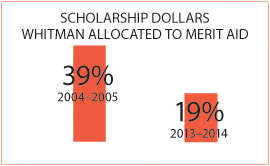 Some colleges are looking to bring in students with high test scores and GPAs to increase their standing in popular ratings, but many also need these students to balance their books. If a school with the average sticker price in the sector of $42,400 attracts a student with a $10,000 merit scholarship, that student will still bring in $32,400. A low-income student, on the other hand, might bring in a $5,700 Pell Grant and a few thousand dollars in state grant aid, but will need much more than $10,000 from the college's financial aid budget to enroll.

Some colleges have avoided this practice. They are generally colleges with large endowments that provide a significant portion of their operating revenues. For these privileged few, while tuition revenues provide important enhancements to the educational experiences of their students, there is no need to maximize those revenues. However, for the majority of private colleges, this is not the case. Their operations are funded primarily by tuition revenue.

Without enough students who can pay high prices, these colleges cannot function. The variation in endowment sizes from college to college is striking, even when comparing colleges that consider themselves peers. For example, in 2011-12, Whitman's approximately $250,000 per student was less than a quarter of Pomona's $1.1 million per student, but more than twice Kenyon College's $110,000 per student, according to the 2013 NACUBO-Commonfund Study of Endowments.

If all the selective private colleges could agree to stop using financial aid to try to affect the enrollment choices of affluent students, sticker prices could probably fall and more low- and moderate-income students might be able to enroll in these colleges. But the Justice Department has made it very clear that colleges collectively agreeing to stop this practice would be viewed as violating anti-trust restrictions. So the practice of granting merit-aid continues to be widespread.

Some liberal arts colleges have taken steps on their own to abandon merit aid altogether, and many have moved to diminish its role. Doing so can lead to greater selectivity and greater diversity. But it may also carry the risk of losing high-paying students who expect merit awards and are weighing tempting offer letters from other colleges.

Diverting some financial aid dollars to non-need-based ("merit") aid is not the only practice that negatively affects the enrollment of low- and moderate-income students; there are also "need-aware" admission practices. While some colleges have "need-blind" admission policies-accepting students regardless of their ability to pay-colleges that practice need-aware (or need-sensitive) admissions limit access to some students because of the amount of financial need they demonstrate.

Whitman does not close gaps with additional loans.

And only 49% of Whitman grads have debt.

The line between need-blind and need-aware is not perfectly clear. For example, many institutions claiming to be need-blind limit international acceptances based on students' financial circumstances. Institutions may act need-blind in the regular admissions process, but consider financial circumstances when they admit from the wait list, if they have already used up their financial aid budgets. There are several ways in which an admissions office can claim to be need-blind but act subtly need-aware. For instance, it is not difficult to get a sense of applicants' financial constraints by looking at their high school zip codes or their parents' occupation and education levels. This information could be used in two ways: to put a "thumb on the scale"-incorporating an understanding of the barriers facing first-generation students-or to minimize the acceptance rates for students who are likely to need a lot of financial aid.

Most selective colleges are explicitly need-aware. While they will accept 70 to 90 percent of applicants based on their academic qualifications alone (need-blind), those high-need students who are on the margin academically may be rejected because the college would not be able to fund them adequately. Their justification: it is less ethical to accept students without giving them sufficient aid than to reject them when they are likely to go to another institution where they will be less likely to have to borrow excessively.

This leads to the question of how well colleges meet the financial need of the students they accept. Whitman meets 93-97% percent of an admitted student's documented need. Some colleges leave much larger gaps, while others claim to meet 100 percent of need. The larger the financial gaps facing low-income students, the less likely they are to be able to enroll and succeed. But measuring need is not a precise science. Many colleges rely on the federal government's formula, which ignores a lot of details about financial circumstances. Other colleges, like Whitman, rely on a form called the CSS Profile to get more information that allows them to differentiate more carefully among families. Some students have higher measured need under one formula, while the opposite is true for others. Moreover, colleges can tweak the formula. For example, they may consider any portion of a family's home equity, from 0 to 100 percent, and they may or may not make allowances for siblings in private high schools or consider assets in retirement accounts. Students who are accepted at multiple colleges may find their ability to pay assessed differently at each institution. One school may be strict in measuring need and then say need is being met, while another school defines the same student's need more generously, expects the same level of net tuition, but acknowledges leaving a gap.  How colleges meet need also varies. Most financial aid packages include grants, work-study and federal subsidized loans (now $3,500 for first-year students). Many institutions also include the $2,000 in unsubsidized federal loans available. Some may even package parent loans or private loans in the financial aid award and say they are "meeting need."

Differences in measuring need also lead to apparent anomalies in the amount of aid offered to students defined as "low-income." While asset levels are often highly correlated with income levels, it is not uncommon to find families that report low incomes but have high asset levels. Examples include divorced parents with expensive homes and self-employed people who organize their finances to minimize tax burdens. Institutions that look at these details may end up awarding minimal need-based aid to some percentage of their "low-income" students. This makes available comparisons of the prices paid by students in certain income brackets problematic, particularly for small institutions where a few students can make a big difference in the averages. 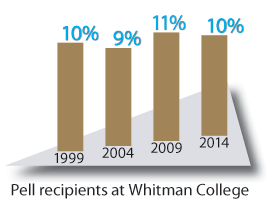 Recently, much of the national discussion has focused on comparing counts of the number of Pell Grant recipients at different institutions. Pell Grants are federal grants that go almost exclusively to students from families with annual incomes below $60,000, and more than three quarters of the recipients come from families with incomes below $40,000. In 2013, the median income of families with heads between the ages of 45 and 49 (those most likely to have college-age children) was $81,000, according to the U.S. Census Bureau. So there are many students who are not eligible for Pell Grants but are below the median, and these students need a lot of financial aid to enroll at colleges like Whitman. A better measure of socioeconomic diversity would consider not only Pell Grant recipients, but also students from middle-income families.

As tuition and fees continue to rise and family incomes stagnate (except at the top of the income distribution), fewer families can pay the price of private colleges without institutional grant aid. Among those who are able to pay, willingness to pay appears to be declining. Families expect colleges-with the possible exception of the most elite institutions-to give them discounts and believe that their children deserve merit scholarships.

All other things being equal, colleges can maximize socioeconomic diversity by accepting more students from low- and moderate-income backgrounds and by providing them with more financial aid. A few colleges have seen real results from their efforts to prioritize enrolling and aiding low-income students, often making trade-offs in terms of salaries, facilities and programs. Other colleges might make the same moves but with less clear results if they are far from urban areas or have reputations for more conservative student bodies.

For students who cannot afford to pay, money is the only answer. For those who can afford to pay but need to be convinced about which is the right college to choose, money is only part of the answer. Geographical location, size and other characteristics over which colleges have little control make a difference, but so do characteristics like available programs, internships and the diversity of the study body.

If more colleges place increasing diversity and providing opportunities at the top of their agendas and think more creatively about attracting students who can pay, the sector will move in a better direction. Unfortunately, as long as competition is strong and resources are tight, individual institutions will continue to move cautiously to be true to their missions while assuring fiscal stability.

Sandy Baum is a research professor at the George Washington University Graduate School of Education and Human Development.