From Stage to Screen: Kaliswa Brewster '05 Acts Out

She's been Églé, a child raised away from society; she's been Alicia, a homeless Iraq war vet; she's been D, a young woman helping to rebuild a decimated black community in the Pacific Northwest; she's been Shakespeare's Juliet. The list of characters Kaliswa Brewster '05 has embodied onstage is long: it stretches all the way back to her fifth grade year when she played Snoopy in You're a Good Man, Charlie Brown.

Despite modest dog beginnings, the list has grown non-stop ever since. Most recently, it boasts a pile of theater roles all over New York City, her network television debut in the season three premiere of the CBS crime drama Unforgettable and a part in the pilot for an upcoming Showtime TV drama, Billions, where she'll act opposite Emmy Award winners Paul Giamatti and Damian Lewis.

"I'm one of the weirdos who likes auditioning," she said, "as long as I respond to the material."

Born in Richland, Washington, Brewster pounds auditions out at breakneck speed. A typical Tuesday might see her up for a spot with a local theater company, then for a part in a play, then for a TV show, all in the same day.

"You switch your outfits and do what you've got to do," she said. "Someone said to me once, 'Auditioning is a chance to act.' It's also fun."

She must be doing something right. She's been called "winningly vivacious," "sensationally radiant," "vital" and "deliciously divine" in theater reviews.

By all accounts, Brewster has always had talent in spades. But, according to Garrett Professor of Dramatic Art Emerita Nancy Simon '63, talent alone is not enough. What Brewster had-and has-is it.

"She was on the line and driven with the chutzpah to see it through," Simon remembers of her former student. Outside of academic classes, the two worked together on a production of Chekhov's The Cherry Orchard at Harper Joy Theatre during the 2002-2003 season.

Simon noted that Brewster's intelligence led her to ask a lot of questions about the characters she plays. "A great actor brings something you never thought about to the role," she said.

It wasn't until graduate school that Brewster realized how rare the rigor of her Whitman training had been. Her high-level peers had often attended B.F.A. or conservatory programs specifically for theater, not B.A. programs. But Brewster says her liberal arts education was instrumental to her success.

"I don't think I would be where I am without having gone to Whitman. It was small, but I felt really challenged," Brewster said. "Eight full productions a year"-the season load at Harper Joy Theatre-"is ambitious and amazing."

"The reason you go to a liberal arts school is you want to have a broad background. Curiosity is very important as an actor, and if you have enough of that to be in a liberal arts program, that's going to help you."

Developing her curiosity and her acting chops during college, Brewster managed to find time to appear in plays including Pride & Prejudice, The Laramie Project, The Tempest, Phaedra & Hippolytus, Damn Yankees and The Afghan Women. She received Harper Joy's Jean Morgan Stone Award and the Joyce Cooper Johnston Theatre Award, and was accepted into the competitive Williamstown Theatre Festival in Western Massachusetts after her second year.

Parke Thomas '79, who taught theater at Whitman from 1995 to 2007, remembers that a former Whitman president used to call theater "a varsity sport." As Brewster's senior project adviser, Thomas saw her competing at the highest level.

"She is a pretty remarkable person," Thomas said. "She is inquisitive. She has an energy to her, [an energy] to do the detective work that goes into acting. She has such a passion for finding out who the character is and who they are to other people."

These qualities propelled Brewster forward and up after Whitman: first, she was admitted to the prestigious American Conservatory Theater in San Francisco, one of two students of the cohort of 17 to receive a tuition scholarship and living stipend. She earned her M.F.A. at ACT; after that, she joined The Acting Company, a nonprofit touring classical theater company whose alumni include Kevin Kline, Patti LuPone, Jesse L. Martin and Rainn Wilson.

Ray Chapman '83 performed three plays with Brewster during her time at The Acting Company, working most closely as Friar Laurence to her Juliet in Romeo and Juliet.

"She was tremendously committed to what she was doing on stage. Like all my favorite actors I've worked with, you can always tell when someone's there with you," he said. "Kaliswa's totally and completely there with you all the time." 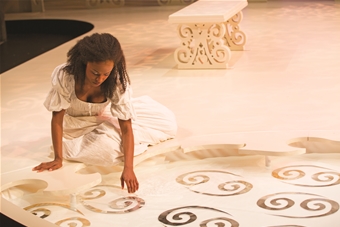 In 2013, Brewster reconnected with director Darko Tresnjak, whom she had met a decade earlier during the Williamstown Festival. Tresnjak, now artistic director at Hartford Stage, invited her to audition for La Dispute, a Marivaux "battle of the sexes" comedy set in Enlightenment-era France. Brewster got the part.

The New York Times called it a "thoughtful, spirited production." It was also Brewster's favorite performance to date.

"The show is extremely physical, which is something I gravitate toward as an actor," she said. "It's a classical, stylized piece, but somehow it required a lot of vulnerability. I have never felt more naked on the stage than I did during La Dispute."

Last spring Brewster took her vulnerability offstage, adding another name to her list-Jenny, a glamorous counterfeiter-by appearing on the CBS crime procedural Unforgettable.

Before being cast in the drama, Brewster had been on several auditions for similar parts in other shows, as well as twice for Unforgettable.

Her persistence paid off when a breakdown (the list of roles producers need for a show) came through Brewster's agent; Unforgettable producers were looking for three Charlie's Angels-type criminals. Having gotten to know the casting director through her previous auditions, Brewster was invited in to meet directly with the producers. She got the part.

"It's a milestone for me. Once you have a network credit, that opens up doors," she said. "I love classical theater, but TV is definitely what I'm moving toward. If you want to survive as an actor these days financially, you have to do TV and film."

Between TV and theater gigs, Brewster has somehow also found the time to take on the Internet, producing and starring in a new Web series. CoExisting, which she co-created, follows a cohabitating Brooklyn couple after a breakup.

"Because it's New York, and real estate is such a big deal, [the couple] fight over who gets to keep the apartment," Brewster says. They both end up staying. Three teasers-"awkward glimpses into what their life was like before the breakup"-have already been filmed and the series written. Brewster and her co-artists are currently on the hunt for sources to help fund the series.

As Brewster explained in promotional material for CoExisting, "You have to create your own projects in this day and age. That was the mantra that was pounded into my head during my third and final year of grad school: 'Create, create, create' came at me from all angles."