For alumnae scientists Nancy Prouty ’93 and Katie Wagner ’04, traveling around the world to map the landscape of a coral reef or discover a new species of African freshwater fish is part of their job as explorers. Their cutting-edge work reveals secrets of biodiverse aquatic life hundreds—and thousands—of meters beneath the water’s surface.

“Back in the 1800s, people thought that the whole seafloor was just a dead zone—and now we know that the deep sea hosts incredibly vibrant and diverse ecosystems,” said Prouty, a research oceanographer with the United States Geological Survey (USGS).

Based in Santa Cruz, California, Prouty conducts much of her research at sea. One of her fields of expertise is the underwater world of corals.

“Coral ecosystems provide really critical habitats for a variety of animals, whether it’s organisms that live on the seafloor or fish,” explained Prouty. “The complex structure of corals is like an apartment building that provides housing for hundreds, if not thousands, of organisms.”

Earth’s oceans boast more than 2,500 species of coral. The biodiverse ecosystems they create constitute a protective habitat for multiple species of fish, mollusks, crustaceans and microorganisms, while the corals’ calcium carbonate skeletons provide a physical structure for creatures such as sea anemones to grow on. 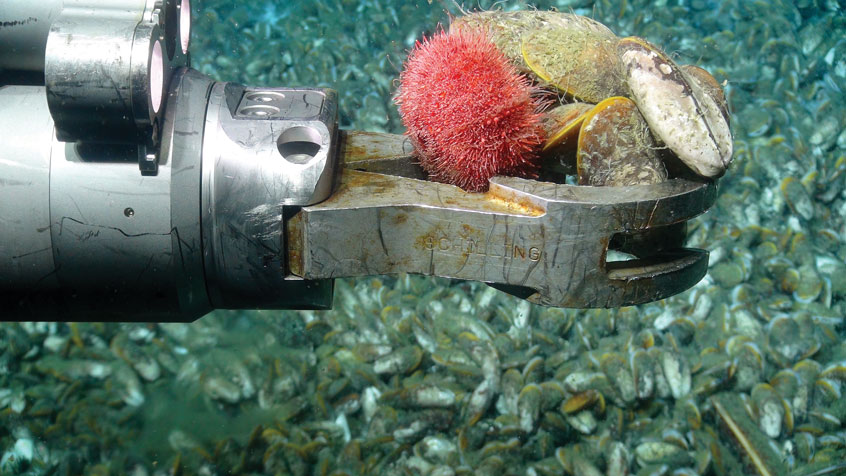 Prouty, who majored in geology at Whitman, explained how her job connects to her undergraduate major: “Many deep-sea coral species need a hard substrate to start growth from, so essentially, this research is founded in geologic studies—geologic mapping of the seafloor is essential to see where there is suitable habitat.”

This mapping technology is a recent innovation, and the history of oceanography—a topic Prouty has spoken on several times—is also very much the history of technological advancement.

“Before, we could only investigate really small portions of the ocean and the ocean floor,” she said. Now, “we have the capacity to leave instruments down on the seafloor and, with crowdsourcing, we can put instruments on shipping vessels or even cruises.” This allows organizations like the USGS “to both map and sample so much more of the ocean than we have in the past several decades.”

Prior to the advent of such technology, crews of fishing trawlers caught the first glimpse of wild coral as byproducts in their vessels’ nets. Prouty stressed that, although this was an important initial step, “now we know those activities are extremely disruptive to coral reefs—they just rip apart these sensitive ecosystems.”

Thanks to modern technology—for instance, remotely operated vehicles that can descend to the deepest parts of the world’s seas—the USGS and partners now learn much more about coral without the same level of disruption. But the ocean remains a largely undiscovered country, and even the USGS can’t map and manage everything.

What Prouty and her colleagues can do is investigate specific types of habitat to “understand the connectivity of certain ecosystems.” Knowing how fragile or unique one coral reef is, for example, enables the USGS to create a model for all reef ecosystems. This model then helps determine whether and how to prioritize the study or protection of different reefs across the world. 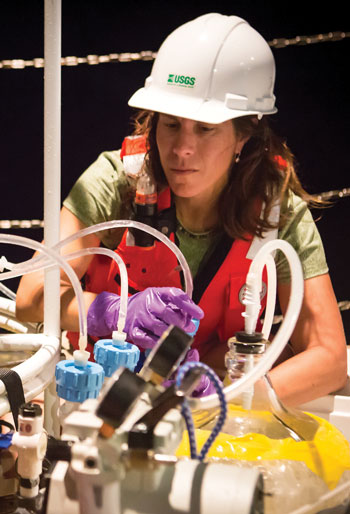 There are two types of corals. The deep-sea variety lives up to 3,000 meters below the ocean’s surface, while shallow-water coral is found in clear, often tropical waters at depths of no more than 60 meters.

Prouty recently took a trip to Kauai, Hawaii, to study the environmental challenges faced by the shallow variety. By “coring”—a process whereby researchers drill into the coral and remove a cylindrical section, then seal the hole with a premade concrete plug—Prouty and her team can count the layers in the coral core to determine how fast it is growing.

From these data, they can infer “what the water temperature was and what we call sediment, meaning terrestrial soil in that system.” This sediment often stems from human and animal activity on land—farming and agriculture in particular.

“What happens up in the watershed—the ridge—affects what’s happening down in the reef,” Prouty explained. “Any time you change the root system upslope, you change the capacity for all that material to be washed down onto the reef. That’s particularly important in these tropical islands that have steep slopes and high rainfall.”

Knowing the impact of this sediment on coral proves vital to understanding how to protect these unusual creatures.

For deep-sea coral, ocean warming and acidification due to climate change pose an increasingly significant threat. “Even though they live several hundreds to thousands of meters below sea level, they’re intimately linked to what’s happening in the surface ocean,” Prouty said.

Photosynthesis in the surface ocean produces nutrients that are transported down to the deepest parts of the sea, to be consumed by coral and other animals, and “changes at the ocean’s surface actually can get communicated down into these deep-sea reefs, because they’re feeding on this vertical migration of organic matter.”

Prouty knew she wanted to be a geology major when she transferred to Whitman before her junior year. But her passion and curiosity for research grew when she collaborated with Professor Emeritus of Geology and Environmental Studies Bob Carson on an undergraduate research project about how glaciers affect the geology of a landscape.

Prouty’s project, funded by the Keck Geology Consortium, was successful “because she was one of the top students in my geomorphology course and other geology classes, and because of her ability to do good field work and write excellent reports,” Carson recalled. “I worked with her on glacial geomorphology in a previously unstudied area. We are very proud of her.” 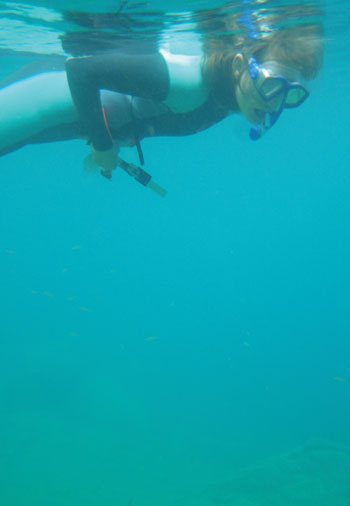 After graduation, Prouty taught outdoor sciences to schoolchildren at Wolf Ridge, an environmental learning program near Duluth, Minnesota, before pursuing her master’s in geochemistry at the University of New Hampshire. There, she did Arctic field work in Baffin Island, collecting core samples from glaciers.

“It required doing a lot of field work in the cold and lab work in the freezer,” she recalled. Prouty embraced a change when she pursued a Ph.D. in Earth sciences at Stanford University, working with Professor Rob Dunbar on coral reef research.

“Nancy has an incredible ability to focus on a good question and quickly come up with the right analytical or sample-based approach to answer the question,” said Dunbar, professor of Earth science at Stanford’s School of Earth, Energy and Environmental Sciences.

An assistant professor in the University of Wyoming’s Botany Department and Biodiversity Institute, Wagner studies freshwater ecosystems just as biodiverse as those Prouty examines. Two years ago, Wagner received the Theodosius Dobzhansky Prize from the Society for the Study of Evolution; the annual honor recognizes the accomplishments and promise of an outstanding young evolutionary biologist.

For years, Wagner has traveled to Lake Tanganyika, a 10-million-year-old, 1-mile deep freshwater lake that is located in East Africa and that hosts 250 different species of cichlid fish and counting.

“The vast majority of species of fish and invertebrates are endemic to the lake—found nowhere else on the planet,” she said. “It is a spectacular place to work as an evolutionary biologist simply because evolution has produced such a tremendous amount of diversity there.”

As part of a National Science Foundation grant, Wagner is researching the process of adaptive radiation—how one ancestral species diversifies into many distinct species in a single place—using new genomic sequencing technologies.

The species in Lake Tanganyika “formed rapidly, so traditional genetic methods didn’t give us enough power to understand the sequence and timing of their origins,” Wagner explained. “Using these new genomic methods, we can finally answer these questions, which opens up all kinds of new studies we can do to understand how evolution works.”

For Wagner as for Prouty, the advent of new technology is a marvel.

“The amount of genomic sequence data that we can collect now is orders of magnitude larger than we could even just a few years ago,” she explained. The first draft of the human genome, for instance, was published in 2003, when Wagner attended Whitman. Now, the same amount of data that took decades and millions of dollars to generate can be recreated within a month. 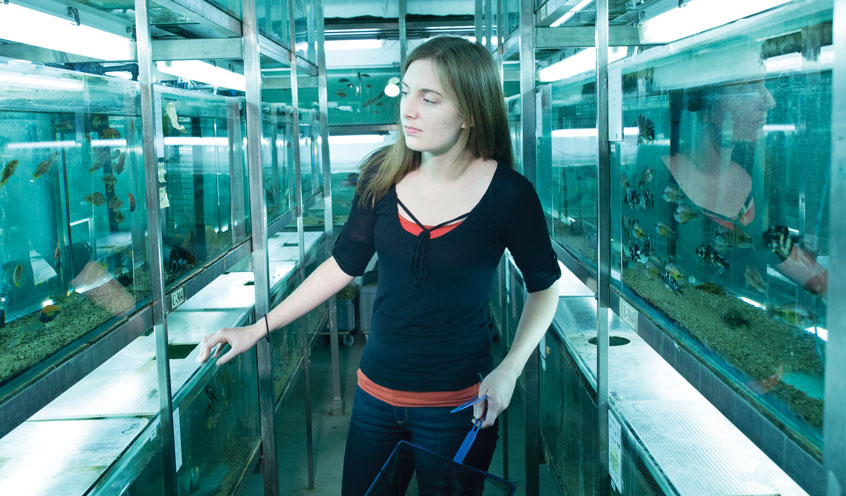 Wagner’s connection to Lake Tanganyika—the longest and second deepest freshwater lake in the world—dates to her time at Whitman. After her junior year, she earned entry into a National Science Foundation Research Experience for Undergraduates program, the Nyanza Project, that took her to East Africa to study adaptive radiation in the lake’s native snail species, a topic that later formed the basis of her senior thesis.

She also recalled several classes during her Whitman career that provided light bulb moments. Professor of Geology Pat Spencer’s History of the Earth demonstrated the value of combining geological and biological perspectives. And in a seminar with Associate Professor of Biology Delbert Hutchison, Wagner became fascinated with the process of adaptive radiation described in Jonathan Weiner’s Pulitzer-winning The Beak of the Finch: A Story of Evolution in Time (1994), which charts the process of evolution in the Galapagos Islands. 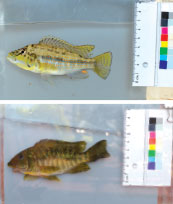 “This is what we try to do at Whitman: guide our students to outdo us in every way and revel in their success at doing so,” Hutchison said. “I could not be prouder of her accomplishments and I look forward to seeing what more she has in store.”

When Wagner went on to earn her doctorate in ecology and evolutionary biology at Cornell University, she realized that the work she had done at the undergraduate level had prepared her well.

“You arrive in grad school and are expected to put together big ideas into a project that will produce novel research,” she said. “Given the training I had at Whitman in how to do literature research, that was an obvious next step. It felt like quite a smooth transition.”

Wagner also conducted postdoctoral work at the University of Bern on factors predicting cichlid diversity in lakes across Africa. One pattern Wagner has seen is that strong sexual selection—if males and females have different colors, for instance—results in a greater likelihood of adaptive radiation.

Wagner also investigates the effects of both climate change and human intervention on freshwater ecosystems. In one project, her lab is researching hybridization between cutthroat trout—a native species—and the more recently introduced rainbow trout in the North Fork of the Shoshone River in Wyoming.

Introduced as sport fish, rainbow trout mated with native cutthroats and produced hybrid fish. The original cutthroat trout are now rare within that ecosystem. “So if you’re interested in maintaining native fish diversity, it’s important to understand in what cases hybridization happens and if there are management actions you can take to prevent extinctions,” Wagner explained.

Geologist colleagues have also examined the effects of climate change in Lake Tanganyika by taking core samples from the lakebed, enabling them to infer past water temperatures and conditions. In addition to demonstrating a warming in the lake that parallels global warming trends, “within the cores, you have preserved fish—things like little bones, teeth and scales—and so we have a direct proxy for fish abundance through time,” she said.

Combining this direct evidence with the genomic data she has collected, Wagner can look at fluctuations in population size over the millions of years of history of these species within Tanganyika.

“That gives us further information about how the recent human impacts on the fish populations compare with natural fluctuations through time that were happening for millions of years even before humans evolved,” Wagner explained.

For both Wagner and Prouty, gaining better insight into our planet’s underwater kingdoms is crucial. Doing so means a fuller understanding of these aquatic ecosystems and of how we as humans affect them.