Commencement Honors and Urges the Best in Whitties

When Commencement speaker Wanjiru Kamau-Rutenberg ’01 addressed the class of 2017 and their families on May 21, she delivered a clear message to graduates:

“On behalf of fellow Whitman alumni from years past, I congratulate you, and I welcome you to this exclusive Whitman alumni community, where membership comes with an obligation to make the world a better place,” she told the 374 seniors and thousands of well-wishers who gathered for the college’s 131st Commencement ceremony.

Kamau-Rutenberg compared returning to Whitman to coming home. Now the director of African Women in Agriculture Research and Development, she majored in politics at Whitman and later earned a doctorate in the field. In 2005, she founded the nonprofit group Akili Dada to help high-achieving girls from poor families in her native Kenya pursue an education.

Her words and deeds inspired politics major Faith Nyakundi ’17, a former Akili Dada scholar: “Not only am I happy she is here, I am happy for the school and the wisdom she will spread to the community,” she said.

For helping build what President Kathleen Murray called “a more just, inclusive and sustainable world,” Kamau-Rutenberg has been honored as a Champion of Change by the Obama White House, named one of the “100 Most Influential Africans” by New African magazine, recognized as a Ford Foundation Champion of Democracy, given the United Nations Intercultural Innovation Award and appointed one of Kenya’s “Top 40 Women Under Age 40.”

Her remarks prompted a standing ovation from the crowd. Attendees also rose to their feet for federal judge James L. Robart ’69, trustee emeritus and former chair of Whitman’s Board of Trustees, who received an honorary degree. Robart made international headlines earlier this year with his ruling to halt President Donald Trump’s first executive order banning citizens from seven Muslim-majority countries from entering the United States. 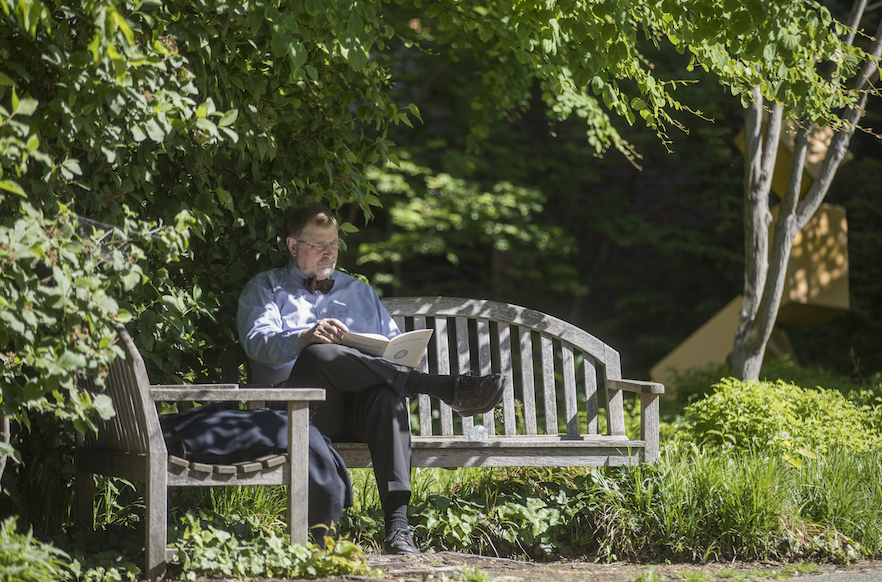 President Murray echoed Kamau-Rutenberg’s sentiments and Robart’s convictions by urging graduates to continue to extend goodwill to one another even during times of conflict: “As we continue to find our voices and to engage in difficult dialogues, I hope we will model empathy, grace and respect.”

In keeping with tradition, members of the class of 1967 returned to campus for their 50th reunion and participated in the Commencement ceremony. Class speaker Arie Knops ’17, a film and media studies major, poked fun at the festive nostalgia in a humorous speech about the Whitman student experience. He also identified the five most common sentences uttered on campus as: “‘I’m from Seattle,’ ‘I’m from Portland,’ ‘I’m from the Bay Area,’ ‘Greek life is different here’ and ‘Sorry, I can’t make it, I have an OP climbing trip.’”

Riffing on other speakers’ uplifting messages about growth, Knops concluded, “According to the Centers for Disease Control, humans grow on average about one fifth of an inch from ages 18 to 21, so … yes, Whitman College Class of 2017, we have grown.”

Brad McMurchie ’84, chair of the Board of Trustees, praised these and other faculty members as the bedrock of the institution, while Murray acknowledged the parents, stepparents, grandparents, siblings and all the other family members present who supported students throughout their college careers.

“We bid you farewell from the physical confines of the campus, but you will always be a part of this place,” McMurchie said. “There are, of course, generations of alumni and friends with whom you will now share a bond. Their generosity and commitment to Whitman helped create what we see here today.”