As dean of Portland’s oldest Episcopal congregation, Nathan LeRud ’04 ministers to a diverse population of parishioners with the mission of making everyone feel welcome.

When the Very Rev. Nathan LeRud ’04 married his partner, James Joiner, it was not a small affair.

“We issued a blanket invitation—we said, ‘y’all come!’” LeRud remembered of his congregation at Trinity Episcopal Cathedral in Portland. “There were probably 400, 500 people there. It was amazing.”

Trinity is housed in a gray stone cathedral, all Gothic arches and stained glass, fronted by an enormous pair of red doors. At the edge of the Pearl District on Portland’s northwest side, the current building was consecrated in 1906. The parish itself was established in 1851. LeRud, meanwhile, was called to join seven years ago and has been working on relationship-building and inclusivity in the community ever since, and clearly making his mark: a third of the church’s congregation showed up to see him tie the knot with Joiner, another Episcopal priest. 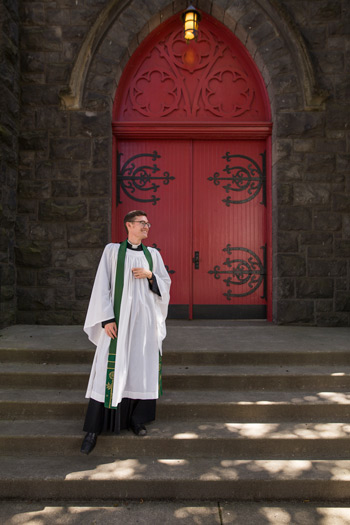 “It was a loaded day,” he said. “I was aware the day would have a lot of emotional significance for a lot of people.”

The significance of LeRud’s wedding three years ago lay not just in the inherent specialness of the day, but in its status as the first same-gender marriage to be held in the cathedral. LeRud had served as assistant rector for the church, and would eventually act as interim dean of Trinity, a position which eventually led to his installation as the third permanent dean of the cathedral, his current position.

LeRud’s congregation had watched the 33-year-old rise through the offices of the church, but they came to the wedding to celebrate not just LeRud’s marriage but the fact of the marriage. Many who attended the ceremony that day had never had the chance to marry their partners; many who attended had loved someone who had never had the chance. This sentiment, LeRud said, was palpable in the atmosphere.

“It wasn’t ever just about me and James,” he said. “The wedding had a kind of symbolic resonance. It was jubilant and bittersweet. And I think that’s what church does best—it gives us a container for things that aren’t just one thing. It was a joy to be able to offer such a gift to my community, to say ‘thank you for embracing me’ and ‘look how far we’ve come, this is where we are, we’re so delighted, how do we give thanks?’”

Trinity has a long history of serving as a welcoming space for marginalized populations. The church opened its doors to Portland’s gay community 20 years ago, at a time when few other religious institutions would, and is active in the city’s events. (Trinity’s Facebook profile picture currently features Bishop Michael Hanley dressed in pink robes, marching in front of a rainbow LGBTQ flag.)

There's something in the DNA of this place that's about inclusion. We're asking what it means to be an open and welcoming community.

Under LeRud’s leadership, Trinity continues to experiment with ways to be even more inclusive, whether that means remodeling entrances to make the physical space easier to navigate for parishioners with disabilities, or un-gendering bathrooms to better welcome transgender members of the church.

“There’s something in the DNA of this place that’s about inclusion,” LeRud said. But actually performing that inclusivity can be much trickier than it seems. It’s not enough at Trinity to say, “Hooray, gay people can get married!” and stop there, he said. “There are a lot of people who are hurting, so we’re asking what it means to be an open and welcoming community.”

He further explained: “It’s easy for a mostly white congregation to say ‘we want more people of color here’; it’s much harder to say ‘why might people of color not feel welcome here?’ Which [community philosophies] are non-negotiable for us? What are the barriers we can remove?”

LeRud described the church’s efforts to help people who are food insecure: Trinity has a food pantry, patronized by about 70 people per day, six days per week, at which bags with enough calories to get an adult through a day are dispensed; men and women in transitional housing are invited to dinners held three times a month; the annual Thanksgiving dinner hosted by Trinity serves up to 600 people every year. Then, he complicates the picture.

Difficult questions begin to arise when a population enacts inclusivity: What happens when people on the socioeconomic margins of society start to think of Trinity as their church and start showing up on Sunday mornings? That’s exactly what Trinity wants, of course, LeRud explained, but it’s not that easy.

“It’s a different thing when someone actually sits down next to you [at a service] and they’re not behaving in an Episcopalian way. Maybe they smell like urine, or are drunk—what happens when the congregation gets uncomfortable?”

LeRud recalled one moment in which a parishioner suffered some sort of episode during a service and wound up sprawled in the middle of the aisle, noisily changing the atmosphere and refusing to be moved. The aisle had to be cleared so other members of the congregation could come forward for communion, and it was not obvious how to help the man.

“It was this really jarring moment,” LeRud said. “I went down and knelt next to him, prayed next to him for 30 seconds or so, and managed to get him to the chapel. When I came back into the cathedral, people were in tears.” Inclusivity is a lot harder than feeding people, he added. “It pushes right back against some of our judgments. So we have to ask: is this a place where people in the margins of society can be here, but on their terms? Or can they only be here on ours? What are our terms?” 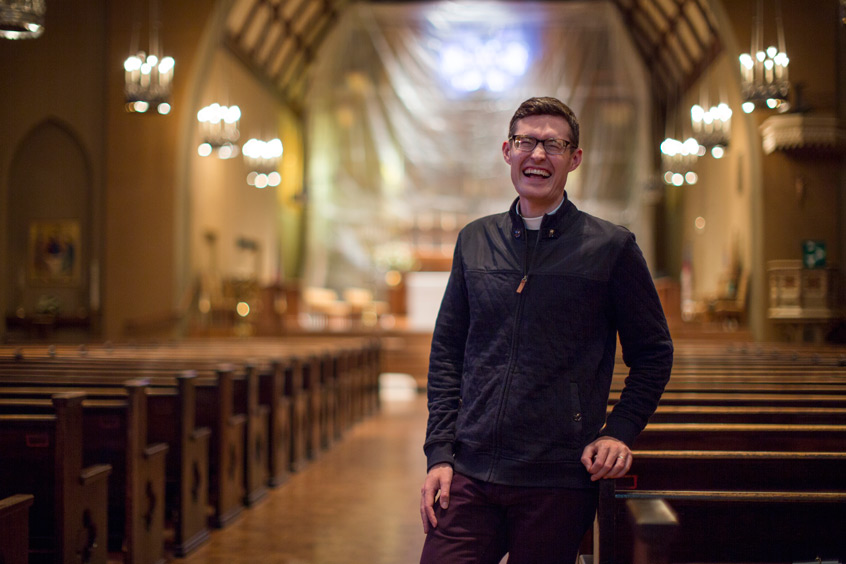 This kind of interrogation of the desire to do good exemplifies the analytical rigor that Whitman graduates often engage in post-college. LeRud, who graduated with a degree in English and theatre, started out as a homesick transfer student fresh from a rocky first year at another school. He had also just come out. Immediately upon arrival at Whitman, he remembered thinking that he was home.

Two of LeRud’s most significant mentors at Whitman were English professor Theresa DiPasquale, who worked with LeRud on his senior thesis on John Donne and the intersection between sexuality and faith, and Associate Professor of Religion and Gender Studies Melissa Wilcox, whom LeRud calls a “fierce advocate.” Both have fond memories of their relationships with LeRud.

Wilcox remembers him as one of her first students at Whitman: “Although everyone who took my first Queer Religiosities class here was enthusiastic about the topic,” she wrote, “Nathan was among those for whom it was personal. He faced religiously-based homophobia in his efforts to fulfill his call to ministry, even though he was seeking ordination in a denomination that remains among the most progressive in Christianity on LGBT issues.”

One particular passage in Justin Tanis’ book Trans-Gendered: Theology, Ministry, and Communities of Faith struck a chord with LeRud. “I remember his excitement at Tanis’ argument that gender identity and gender expression can be understood within a Christian framework as a calling from God, similar to a call to ministry, and I remember Nathan talking to me after class about how Tanis’ ideas could be applied to sexuality as well.”

The impact of that class and others on LeRud was significant. “It was mindblowing to find out there were other people talking about what it was like to be a gay person of faith,” he said.

On LeRud’s path after Whitman, DiPasquale said, “I feel very privileged to have helped facilitate the connection between John Donne, dean of St. Paul’s Cathedral in London, and Nathan LeRud, dean of Trinity Episcopal in Portland! Thinking about Nathan’s career, I am moved to quote Donne’s poem ‘To Mr. Tilman After He Had Taken Orders.’”

“‘as we paint Angels with wings, because
They beare Gods message, and proclaime His lawes,
Since thou must doe the like, and so must move,
Art thou new feather’d with coelestiall love?’

“He then answers his own query in the affirmative by comparing the clergyman's vocation—a vocation strongly grounded in language arts—to the motherhood of the Blessed Virgin:

“‘Maries prerogative was to beare Christ, so
’Tis preachers to convey Him, for they doe,
As Angels out of clouds, from Pulpits speak;
And blesse the poore beneath, the lame, the weake.’

“How rich is the field of literary studies, when it can bear spiritual as well as intellectual fruit!”

As for his choice of majors, LeRud maintains that English and theatre are two of the best subjects a future priest can study (advice that originally came from his father).

“Half of what I do is read and interpret texts; then I preach. Auditioning was the best preparation I ever had for preparing a sermon—all of my English and theatre classes were directly applicable to the work I do now,” he said.

Looking toward the future, LeRud said he’s grateful that Trinity has always provided new opportunities for him to step into in the seven years he’s been there. He describes it as a flexible and progressive place where he has been able to build relationships deep enough that when his parishioners are on their deathbeds, he is the one they know they can call to be beside them. The church allows experimentation with social programming, lets LeRud try and fail, and there is always an invitation to go deeper.

“Trinity is really interesting, a big place with lots of resources, and it’s really important that what we do we do professionally, sustainably and well,” he said. “Our liturgies are beautiful, we have a world-class music educational program, and there’s a high emphasis on quality and integrity, nimbleness and flexibility that feels very Portland-y to me.

“We don’t take ourselves too seriously,” he added. “We’re here to have fun and to have our lives be changed.”