Tennis player Zach Hewlin ’18 also made it to the semifinals of the NCAA 2016 Division III Men’s Tennis Singles Championship this past semester. Though Hewlin lost to seventh-seeded Branden Metzler from host Kalamazoo College, his path to that point had been remarkable, with a triumph over Rafe Mosetick of Emory University, the number 1-ranked singles player in the Intercollegiate Tennis Association (ITA) Atlantic South region, in the first game. Hewlin was also named the Northeast Conference's player of the year, and an NCAA All-American thanks to his success in reaching the round of 16.

In men’s baseball, Joseph Zimmer ’18 was named to the American Baseball Coaches Association/Rawlings NCAA Division III West All-Region second team. The only Whitman student to receive the honor, Zimmer's year was nothing short of spectacular, with 15 consecutive at-bats with a hit—a record good enough to stand across all three NCAA divisions. Zimmer accumulated 60 hits over the course of the year and 13 multi-hit games, including four games with four or more hits. Zimmer received a number of other honors, including being named National Division III Player of the Week last semester by the National Collegiate Baseball Writers Association. 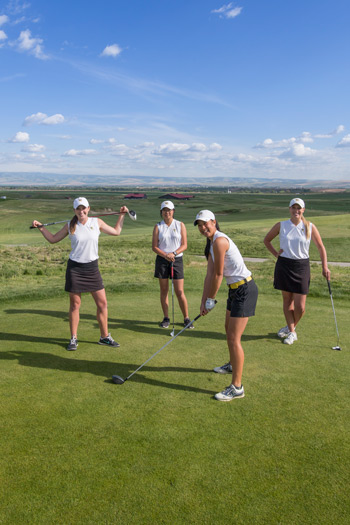 The Whitman Women’s Golf Team also made it to the NCAA 2016 Division III Women's Golf Championship this year. Despite some bad weather, the team tied for eighth place with the University of St. Thomas. The foursome was third best in par-fours (4.44 average) and par-fives (5.21) of the 21 competing teams, and fifth best on the par-threes (3.42). Like team coach Skip Molitor, Head Women’s Lacrosse Coach Kate Robinson was voted conference coach of the year by her peers.

Whitman’s women’s golf team competed in the NCAA Division III Women's Golf Championship for the second time this past spring. From left to right, Lou Points ’17, Shiyang Fan ’19, Phoebe Nguyen ’18 and Alyssa Maine ’16 traveled to Houston, Texas, where—in spite of bad weather—the team came in eighth. Nguyen also tied for ninth place, and both she and Fan were named All-Americans, while head coach Skip Molitor was voted the league's coach of the year by his peers. The W Club will hold its seventh annual golf tournament on Sept. 23, during this year’s Reunion Weekend.