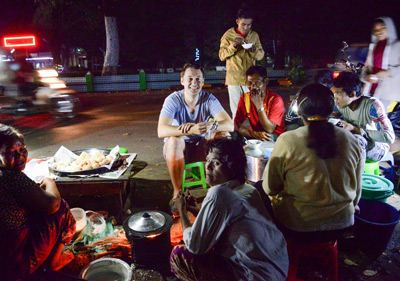 When Matt Schissler ’07 set off for Southeast Asia as a young college graduate, he did not expect to stay longer than a couple of months. Eight years later, he has returned to the United States to pursue a doctorate in cultural anthropology at the University of Michigan focused on the mobilization of religious conflict and telecommunications infrastructure, drawing on his experiences in Thailand and Myanmar (Burma), an isolated country only recently opened to the West.

This year, Schissler was awarded the National Science Foundation Graduate Research Fellowship, one of only 2,000 recipients from about 17,000 applicants. Of those selected, just 16 are cultural anthropologists. The program recognizes outstanding graduate students who are pursuing research-based master’s and doctoral degrees in areas within the scope of NSF’s mission, including the STEM fields, social sciences and psychology.

Schissler, who learned to speak Burmese, said he ended up working in Myanmar “through a kind of confluence of circumstance and conscience.”

After graduating from Whitman, he planned to travel around the region, then spend a few months teaching English in Myanmar. However, peaceful demonstrations inside the country soon gave way to a violent government crackdown, and foreigners were kept out.

“At that point I was in Thailand—so close!—and I thought I'd try and get closer,” he said. “I went to Thailand's western border with Burma. At first, I was just teaching English in a primary school. But I was in a small rural town, which turned out to be the epicenter for underground political activities of an indigenous group call the Mon, who live all across southern and eastern Myanmar.”

He added, “Suddenly I was meeting these amazing journalists and human rights activists, who were working secretly inside Burma and then getting that information to Thailand from where it could be published.”

There, Schissler also served as an adviser to a local NGO working to promote peace and support communities impacted by the country's large-scale development projects and natural resource extraction. Earlier, he spent about five years with a news agency and two groups focused on human rights in southeastern Myanmar.

“At first I was asking questions and trying to learn as much as possible because I wanted to be better able to work,” Schissler said. “But it seemed impossible to do that without also asking about the nature of the work itself. When my Ph.D. is done, I’ll still have a lot of questions about Burma, but also about violence, the law, media infrastructures. I’ll probably never answer these in any sort of complete sense, but it seems worthwhile to spend a life trying.”