A Whitman alumna organized a program to help potential medical students shadow doctors to find out if they can handle the “dark side of medicine.”

Less than 50 percent of students who apply to medical school will be accepted.

Even with high grades and test scores, students may still lack a recommendation that is quickly becoming a requirement: physician shadowing.

Enter the Walla Walla Clinical Shadowing Program, a community-wide endeavor aimed at connecting students and physicians in the Walla Walla area. Much of the work for the creation and implementation of the program stems from one Whitman student: Olivia Ware ’13.

As a sophomore biochemistry, biophysics and molecular biology major, Ware began researching medical schools and discovered many required 40 hours of shadowing to even be considered. She took the problem to neurologist Dr. Ken Isaacs and Jim Russo, associate professor and director of Whitman’s BBMB program.

“This has been an ongoing issue for more than a decade,” Russo said. “It became more prominent when the University of Washington—which had frequently said shadowing isn’t a requirement—made it formal on their application process to state an expectation for a certain number of hours of shadowing. In 2013, Olivia, Ken and I sat down and began to think about what it would take to formalize the process.”

Dr. Carol Teitz, associate dean for admissions at the school of medicine, University of Washington, points out shadowing hours are not a requirement for admission, but they are strongly recommended.

“We really think [students] need to have watched doctor/patient interactions. Many other schools do as well. It’s mainly the time and the money invested by the student in the education, so we’re being a little bit paternalistic, saying, ‘You’re gonna spend the next four years in school, three to eight years after that in training, incur a minimum of $200,000 in debt, and you really need to think seriously about this decision,’” Teitz said.

Teitz said students often approach medicine from what they’ve experienced as patients, but a patient does not see everything a doctor does or experience what Teitz dubbed the “dark side of medicine.”

“You get to hear a lot from the perspective of a patient, but you don’t necessarily get to see what it’s like to tell someone to stop smoking month after month, to tell someone they have a terminal illness and deliver bad news. Those would be sort of the dark side of medicine,” she said.

In addition, students may not understand the additional work that goes into being a physician outside of seeing patients, such as paperwork, electronic medical records, billing systems and time constraints. Teitz calls many students “idealistic,” adding they wish to save lives and change the world but may not understand what to expect.

“People think that they know what they’re getting into until they actually get into it a little bit,” she said.

With an understood need and growing problem, Russo and Isaacs hired Ware to devise a shadowing program and create a system that would bridge the divide between doctors and students while also making shadowing equitable and available to all students—not just those with physicians in the family. 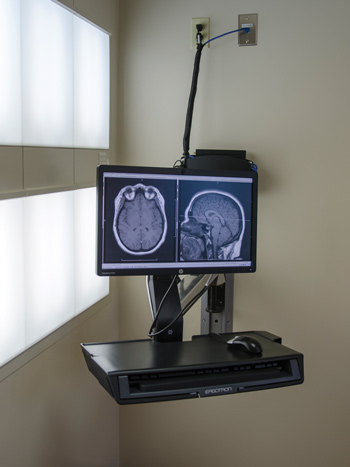 Ware comes from a family background of doctors, so as a college student, she knew at least some physicians would have an interest. What she did not know was how many physicians would be willing to donate their time—or how much time they could provide. She passed out surveys to students and physicians finding out whether anyone had participated in job shadowing and what the roadblocks were to participation.

“Students didn’t know how to talk to doctors, and were really busy with school. Doctors were too busy, hadn’t thought about it or students hadn’t approached them,” Ware said. “It was a lot of data gathering…just trying to encourage people that this is something they should do.”

Ware began conducting surveys, gathering information and drafting a website to help students and physicians connect. One of the first physicians the team approached was Dr. Tim Davidson, a practicing pulmonologist and physician chief executive for Providence St. Mary in Walla Walla.

“So often people who are interested in going into medicine have little appreciation for what it’s like, the skills it takes to be successful and what your day will be like,” Davidson said. “Having the ability to sit and observe and then ask questions later is very valuable.”

Including Davidson, 40 physicians signed up for the Walla Walla Clinical Shadowing Program, from oncologists to surgeons. As of May 2015, that number has grown to 70 physicians.

One participating physician, neurosurgeon Dr. Jason Dreyer, has worked with about a dozen students and said he highly recommends the program.

“A lot of the specializations, like neurosurgery, for example, are very competitive. This is a really good first step,” Dreyer said. “If you go into medical school and you aren’t prepared, you’re not going to make it.”

Dreyer gives students the option to observe in a clinical setting or the operating room. He talks with students about what will happen and answers any questions the students have, and he said one visit is usually enough for a student to know if he or she will be interested in neurosurgery.

Through shadowing, some students have discovered an unrecognized passion toward a specific profession, like neurosurgery. Some will discover pediatrics is not what they expected or surgeons spend much less time in the operating room than expected. Others may discover medicine isn’t what they were looking for—before paying for medical school.

For example, Heather Lovelace ’15, a BBMB major, is interested in becoming a nurse practitioner. A center for the Whitman basketball team, she shadowed four clinicians: a dermatologist, an orthopedic surgeon, a cardio nurse practitioner and an emergency room physician. Each one provided a different perspective and helped her narrow down which angle she would like to pursue in the future.

“No matter what your interest, you’re going to find your niche,” Lovelace said. “The [medical] field is so broad. Because you don’t know, come in with an open mind.”

Quinn Piibe ’15 called the Walla Walla Clinical Shadowing Program a “great experience” and said he would encourage those interested in medicine to shadow at least one physician before applying to medical school.

“I shadowed a pulmonologist every other week the past summer and last semester for an hour to an hour-and-a-half each session. I also shadowed a neurosurgeon four or five times for about six hours each time,” said Piibe, also a BBMB major.

“With these two different specialties, I have been able to experience the surgical as well as the clinical side of medicine. I get to discuss each case with the physician after he sees the patient. It has been very interesting to get to so closely experience the work of a physician.”

gives a better picture of what a physician’s day is like. Davidson agreed and said shadowing can also dispel misconceptions about medical practices.

“It’s not all emergency room, bullet wounds one after another,” Davidson said with a smile.

The program primarily serves Whitman students, but is open to students at Walla Walla University and Walla Walla Community College. Students who call the area home but attend college elsewhere have also utilized the program, either before or after college, or when back in the area for breaks between terms. Ware said even high school students have expressed interest in the program.

“This is the Walla Walla shadowing program, not the Whitman shadowing program,” she said. “The long-term goal of this project—it’s not just going to stay in Walla Walla, but go county by county in Washington. King County is already thinking about using this program as a model.”

With medical school costs averaging $200,000 in the United States, Ware and the rest of the program’s team say shadowing is important not only for admission to medical school but to understand what a career in medicine really means.

“The thing I care about most is giving students who don’t have the opportunity to meet somebody a chance to see if they like it,” Ware said. “Med school is such an investment. Make sure you know what you’re in for.”

Ware points to an article in The Journal of The American Medical Association which states that nine out of 10 physicians would not recommend the profession to the next generation.

“[Doctors] say yes there are a lot of real problems, but I love

what I’m doing,” Ware said. “You want to show students that kind of doctor.”

For more information, visit www.wwshadowing.org. All students must have a referral from a participating university before joining.