Whitman Magazine, the college’s flagship publication, has undergone changes. We redesigned it because we wanted to create an object with which our readers would enjoy spending time—a magazine to compete with all the other devices and media outlets from which our readers consume information. To compete, Whitman Magazine must remain relevant to our alumni, who have aged, married, divorced, had children, purchased homes, ascended to the tops of their professions, lost loved ones, experienced the joy of grandchildren.

Thus, we are committed to covering a diverse group of stories to profile the human condition as seen through—and sometimes written by—our alumni, faculty, students and staff; we strive to publish features and photography that illuminate Whitman’s story.

In the meantime, we continue to contemplate the aesthetics of our magazine, a medium through which we tell stories with images, text and the white space that provides relief for readers. Our visual style is as important as the words we write and the photographs we take. It helps set the tone of our magazine.

To that end, David Schulz, our senior designer, art-directed the redesign. His work on the magazine derives from an interest in structuring content through the interplay of typography and image. His choice to set the book in Adobe Garamond is an acknowledgement of the connection between Renaissance scholarship and the development of type in the 16th century, a time which saw curricular changes that resonate today in liberal arts education at schools like Whitman. 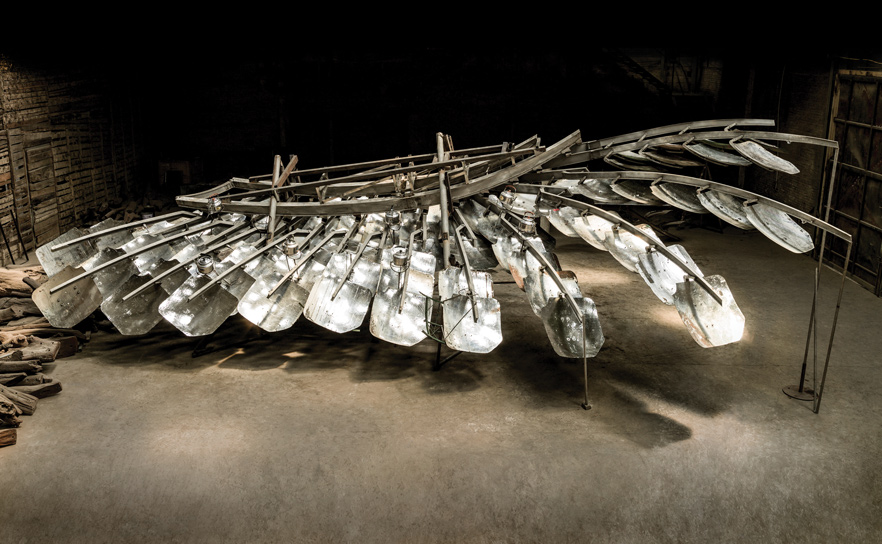 Whitman will host work by Chinese artist and political activist Ai Weiwei. The piece, titled “Refraction” (pictured above), will be on view from September to August 2016.

“Refraction” takes its cues from the shape and structure of birds’ wings, and uses reflective panels of the type used on solar cookers in Tibet—a region that has long struggled under Chinese rule—in place of feathers.

The artwork is coming to Whitman thanks to the Anderson Foundation for the Arts, which is coordinating the installation with Ai Weiwei’s studio. The Foundation was formed by Mark Anderson ’78.

During Anderson’s recent visit with Ai, a show at the Foundry Vineyards was proposed and accepted. That exhibition will be going up in August and will run through the fall. “Refraction”, which was most recently displayed at Alcatraz, is a piece that Ai wished to be installed in a more public venue.

“I can’t tell you how excited I am for Whitman to have this opportunity,” said Director of the Sheehan Gallery Daniel Forbes. “Not only is this work by one of the most dynamic and provocative artists on the world stage today, but it is also a stellar example of what Whitman students like Mark Anderson have done with their studio art educations.”

Now Is The Time Campaign Surpasses All Goals

On June 30, 2015, the Now Is the Time Campaign came to an end with results that were well beyond expectations. More than $165.7 million was raised—that is 110 percent of the initial goal of $150 million.

When George Bridges was recruited to Whitman in 2005, the Governing Boards charged him with leading Whitman’s first comprehensive fundraising campaign in more than 20 years. With John Stanton ’77

at the helm as campaign chair, the governing boards began quietly building support for the effort in July of 2007, followed by the public launch in November of 2011. A Campaign Steering Committee and more than 70 volunteers serving on regional committees spread the word about the campaign and its aspirations for Whitman’s future. As we first reached out to alumni, parents, and friends, then President George Bridges noted the campaign’s importance, telling all: “Our leadership today will write Whitman history for years to come.”

Eight years later, we can all be proud of what has been accomplished. “Now Is the Time has strengthened Whitman’s liberal arts education to better prepare our students to become leaders in the new century,” remarked Chair Stanton in celebrating the campaign. For your gifts to the campaign, Stanton adds his thanks: “It is exciting to see our goals for the student experience at Whitman begin to come to fruition through this effort. Now is the time to celebrate all of you who helped make this possible.”

Read more about the campaign’s successes inside the back cover of this magazine and online at www.whitman.edu/campaign. A comprehensive report on the results of the Now Is the Time Campaign will be issued this fall.

The W Club and the Alumni Association present a trip to Spring Training with the Seattle Mariners, March 9-12, 2016. The package includes three nights at the McCormick Scottsdale, motor coach transportation between resort and games, preferred tickets to two Seattle Mariners games and an exclusive Mariners dinner with select players. Space is limited. Deposit is due upon reservation. The final payment is due by October 31. See details at whitman.edu/alumnitrips.

Whitman students will soon be able to earn a degree in computer science.

Janet Davis, associate professor of computer science, is on campus and will begin teaching classes this fall, while building a CS program from the ground up. Although a major in CS is not yet an option, students can now minor in the discipline.

“My interests lie in the area of human-computer interaction,” writes Davis, who comes to Whitman from Grinnell College.

“I see this area as broadly addressing a scientific question and a design question: How do people interact with computers? And how can we design computer systems to enhance rather than detract from the human experience? My work as a computer scientist emphasizes the latter.”

In her current work, Davis is exploring methods for the design of “ethical persuasive technology,” which she interprets as “technology that is designed to change what we think and do.”

While teaching and chairing the CS steering committee, Davis will be blogging about the highs and lows of creating a CS program that fits into Whitman’s liberal arts model. The blog is “Counting from Zero” (blogs.whitman.edu/countingfromzero).

Davis believes that CS is right at home within the liberal arts curriculum.

“Technology is becoming increasingly ubiquitous. Understanding computational capabilities and limitations is important to being an informed citizen in today’s world,” Davis said.

The Whitman CS program will introduce students to technology, new ways of thinking, and tools to concretely and/or algorithmically—through the use of technology—communicate, evaluate, understand and design solutions to complex problems in many domains.

For more information on the CS program: whitman.edu/cs.

This fall, we welcome classes from 2005 to 1950 and beyond! Don’t miss out on the chance to reconnect with your classmates and your campus on September 24-27.

Go to whitman.edu/reunions for details on events, lists of your classmates who plan to attend and lodging information. We have blocks of hotel rooms reserved all over town, but only until the end of August.

Official registration opened early August; in the meantime, RSVP online to let us know you’re coming, or call the Alumni Office at 509-527-5167.