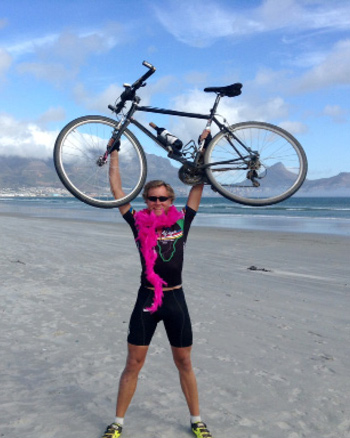 Nate Freeman '04, who earned a B.A. in physics-astronomy from Whitman and a J.D. from Yale, cycled from Cairo to Cape Town in support of LGBT rights.

Impossible. Or if not impossible, certainly insane. My mind was awash with doubt in the waning light as I struggled to pitch my tent. The icy wind blowing across the Egyptian desert numbed my fingers and did nothing to ease the ache in my legs from the 120 kilometers I had just cycled. It was the end of the first day of a 12,000-kilometer ride across the African continent from Cairo to Cape Town, and I felt overwhelmed.

There is no way I can do a ride like this 99 more times.

Similar doubts persisted during the four months that followed, from January 9 to May 9, especially during moments of despair or hilarity, which were often linked: sprawled flat on my back after a crash in the 128-degree heat of Sudan; throwing up the remnants of an Ethiopian dinner in a cockroach-infested latrine; or watching a lion stalk the perimeter of our camp in Botswana. I quickly realized that I couldn’t allow myself to think about the endpoint of the journey. Cape Town seemed too far to fathom, too far even to discuss.

“Where are you going?” people would ask as I cycled past. “Kenya!” I would reply in Ethiopia. “Tanzania!” I shouted in Kenya.

Where was I going, exactly? And what questionable life choices had gotten me to the point where a cycling odyssey across the Sahara seemed like a good idea?

Part of the answer to these questions seemed like the logical culmination of a longer journey. Ever since leaving the cornfields of Iowa for the wheat fields of Walla Walla, I had thirsted for adventure and for experiences that would open my eyes to the broader world in which I lived. I spent the year before the bike ride in South Africa, where I served as a law clerk to Justice Edwin Cameron. Justice Cameron is one of South Africa’s most respected intellectuals and—as an openly gay and openly HIV-positive man—one of its most important activists. During my time at the court, he introduced me to a number of LGBT (Lesbian, Gay, Bisexual, Transgender) rights proponents in South Africa and abroad. Those introductions inspired me to put down the law books for a few months and become an activist for something I believed in—namely, that LGBT rights are human rights and that freedom of sexual expression is a fundamental component of human dignity.

I found a company, Tour d’Afrique, which runs a bicycle race from Cairo to Cape Town once a year and signed my life away. Then, with the help of both South African and American colleagues, I created the “Out in Africa Ride” foundation, designed a website, set up a fundraising page and started reaching out to locally-based nonprofit organizations.

Our goal was threefold: to create a database of research on laws and activism concerning the LGBT community; to find and connect organizations across the continent who were working on these issues; and to promote the work of those organizations and seek funding for their missions from a wider audience.

Perhaps my most important task was to find a bike shop in Johannesburg that could help me build my steed. I named my bicycle Simon Nkoli after a courageous South African anti-apartheid and gay rights activist, a man who symbolized for me how the measurement of a human being must transcend both race and sexuality.

THE CAUSE for which I was cycling certainly wasn’t a popular one in many parts of the continent. The news about LGBT people in Africa in recent years has been grim. In the past year alone, Egypt has arrested more than 100 people for being gay under the rule of General Abdel Fattah el-Sisi. In Uganda, where gay activist David Kato was murdered in 2011, the government has attempted to criminalize not only same-sex relationships but also the advocacy of LGBT rights. (Thanks to the efforts of the Human Rights Awareness and Promotion Forum and other groups, the controversial Anti-Homosexuality Act was overturned in 2014; but the government is currently appealing the ruling.) Sudan and northern Nigeria still maintain the death penalty to punish same-sex relationships.

Beyond my personal safety, I also had questions about my role in the ongoing struggle. Who was I, a white American, to engage in a debate in countries that were culturally foreign to me? Was I doing more harm than good? One of the current political talking points that has been echoed in several African countries is that homosexuality, and especially LGBT rights, are Western inventions. These statements are nonsense; indeed, it is the criminalization statutes themselves that are holdovers from the old colonial powers. Nevertheless, another American lawyer jumping into the fray could serve merely to reinforce a problematic narrative.

I grappled with these questions while I struggled through the terrain, the weather and the physical duress. In moments of doubt, I reminded myself of the poem “Ithaka,” in which C.P. Cavafy speaks of the “rare excitement” that stirs spirit and body on the voyage to Odysseus’s homeland, and the wealth that is gained from the journey itself. I was fortunate to have several encounters that stirred that rare excitement and helped me formulate answers to the questions that troubled me.

In Kenya, I met George Gachara and Eric Gitari. George has been prosecuted by the government for his work producing a film titled Stories of Our Lives, which documents the experiences of gay and lesbian Kenyans. Despite threats, George is now creating a book out of the stories he heard while producing the film.

Eric has also had run-ins with the law, although most recently as a plaintiff. He has sued the government for its failure to recognize his organization, the National Gay and Lesbian Human Rights Commission. The government claims that the words “gay” and “lesbian” are offensive and promote illegal activity.

I spoke with Paul Kasonkomona, who appeared on a radio show in Zambia to discuss the importance of LGBT rights. Halfway through the program, an assistant shoved a piece of paper in front of Paul that read: POLICE ARE OUTSIDE. The radio host suggested they cut short the interview, but Paul refused. “They’re going to arrest me either way.”

In Ethiopia, I met a group of underground activists who are trying to address the public health crisis that has been created by the criminalization of same-sex relationships. The group is developing support groups, health education services and a website where people can ask doctors their health questions while maintaining their anonymity. The group calls itself Dana, which means “little steps.”

And in South Africa, I spoke with the Gay and Lesbian Network, which has just opened an outreach center for LGBT people in a township outside Pietermaritzburg to provide health services, career guidance and peer support.

While the theme of the trip was to change perceptions about LGBT people in Africa, the perceptions that changed the most were my own. The encounters I had filled me with a great deal of optimism. It’s true that the activists I met did not portray an easy life for sexual minorities in Africa. Even so, the Africa that is presented on the news—the Africa of oppression and poverty and dysfunction—was only part of the story. The Africa I experienced was also a place of energy and creativity and growth. It was a place where activists were passionate about their cause and excited about the future. It was a place of beauty.

THE ROAD TO CAPE TOWN never ran smooth. We battled headwinds and heat, rough dirt roads and construction, car crashes and malaria. Likewise, the fight for non-discrimination is far from an unerring march toward progress. The political climate is becoming more repressive in Egypt under its current ruler, while four of the members of Dana decided to flee Ethiopia after their identities were nearly discovered during the recent election. But there were more causes for celebration than for despair. The Ethiopian organization will regroup; Eric has just won an exciting judgment in his favor from a lower court in Kenya; and Paul has now been fully acquitted by the Zambian courts. At Paul’s final hearing, several dozen sex workers came to the court to support him wearing bright red shirts that read: “No freedom without freedom of expression.” As Cape Town inched nearer, I felt more and more strongly that protections for LGBT people in Africa were within reach.

Our arrival in Cape Town did not mark the end of my voyage; I have only just begun to reflect on and grow from the experiences I accumulated. Similarly, there is no fixed endpoint in our ability to see LGBT people as beautiful and worthy of equal treatment. The debate in the United States is not over just because the Supreme Court has held that same-sex couples have a constitutional right to be married. In Africa, decriminalization of same-sex relationships is only a first step. As Cavafy suggests, the destination is less important than the knowledge gained from the voyage:

And if you find her poor, Ithaka won’t have fooled you.

Wise as you will have become, so full of experience,

you will have understood by then what all these Ithakas mean.

I hope I have become wise enough to understand some of my own Ithakas. I have learned that I can help other LGBT people in foreign countries claim their right to dignity. There is a difference between speaking over or in place of someone and acting in a way that helps that person’s voice to be heard. The more we aim for the latter, the less it matters that we come from a different cultural background or that we have not faced the same experience of marginalization. The real work is to find the voices that speak truth from their history and learn to listen to them. Whether as a white person trying to understand and combat the oppression that has been leveled against people of color for centuries or as a straight person trying to understand the struggles of sexual minorities, we have ears to hear the experiences of others and voices to raise against the injustices contained in those stories.

We also have more imagination than we realize: the limits of the possible are beyond what we can see. In one of my favorite passages from Lewis Carroll, Alice tells the Queen, “One can’t believe impossible things.”

“I daresay you haven’t had much practice,” the Queen replies. “Why, sometimes I’ve believed as many as six impossible things before breakfast.”

Cycling across a continent and achieving protections for LGBT people throughout Africa both seemed impossible six months ago. Now I suddenly find that I need four more impossible things to believe before the morning is over.